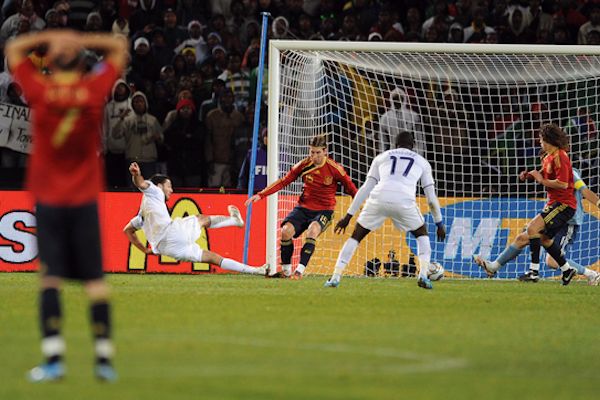 By Clemente Lisi – NEW YORK, NY (Nov 5, 2013) US Soccer Players – In this series, we’ve spent US Soccer’s Centennial looking at the standout moments for the Men’s National Team. Above all, were the times the US National Team overcame a high-caliber opponent: England in 1950, Colombia in ’94, Argentina in ’95, Brazil in ’98 and Portugal in 2002.

The one win that defines the current US team – and showed just how far the program had come – took place against Spain at the 2009 Confederations Cup in South Africa. The Americans had barely managed to get out of Group B (which also featured Brazil, Italy and Egypt) after going 1-0-2, but defeated Egypt 3-0 in the group’s final game. The USA’s second-place finish pitted them against mighty Spain in the semifinals. To put it mildly, it was a mismatch.

Spain was one of the favorites to win the title. Winners of the European Championship the prior year, Spain had been on a winning tear. The team had finally lived up to its hype and many were already picking them to win the 2010 World Cup – a feat it accomplished a year later. Against the USA, Spain was putting its 35-game undefeated streak on the line. By the time it was over in Bloemfontein, the USA posted a 2-0 shutout, stunning their opponents and the world. Goals by Jozy Altidore and Clint Dempsey sealed the win and gave #1 FIFA-ranked Spain its first loss since November 2006.

The Americans did everything right that night, while Spain could not break through against goalkeeper Tim Howard and the tight US defense. The team finally seemed to come together after three weeks of training and games.

“Whenever you beat a team that’s ranked #1 in the world is a big deal,” said Bocanegra. “To defeat Spain was great.”

The US backline that night featured Bocanegra, making his first start at left back since March 2007, playing alongside Jay DeMerit, Oguchi Onyewu, and Jonathan Spector. With the American defense on lockdown, the USA nearly scored early on as Charlie Davies’s bicycle kick off a Dempsey cross just went wide of the goal in the seventh minute. A minute later, another Davies shot went wide of Iker Casillas’s goal.

Spain, playing with the attacking trio of Fernando Torres, David Villa, and Cesc Fabregas, were unable to penetrate the US defense. The game, played at a frenetic pace, featured a series of attempts on both sides – but the Americans were the ones to score.

It was Altidore in the 27th minute that ended Spain’s shutout streak at 451 minutes. Dempsey played a one-two with Davies and looked for Altidore who was being marked by his Villareal teammate Joan Capdevila. Dempsey’s pass was deflected by Xabi Alonso, but Altidore was able to shoot the ball that bounced off Casillas’s hand and into the net for the 1-0 lead.

Altidore said the goal was “one of the biggest moments of his life…. It was a tough game. I think Spain underestimated us.”

With the Americans hanging on to preserve the lead, Spain upped the pressure in the second half. Howard made a series of saves to keep the Spanish off the scoreboard. In the 79th minute, the Americans put the game away when Dempsey made it 2-0.

Former French international Marcel Desailly, working as a BBC commentator that evening, said, “I was certainly impressed by USA. Each of their players have a very good level of discipline and they did not make a single mistake to allow Spain to score. The Spanish played in too tight a space…. They were tired and not motivated.”

With four minutes left to play, Michael Bradley was ejected following a late tackle on Xavi Alonso. Despite being reduced to 10-men, the United States won the game. The US would take a 2-0 lead against Brazil in the Confederations Cup final, eventually losing 3-2.

The Americans, however, had made their point. The United States beat Spain and came within 45 minutes of its first FIFA trophy. For the first time in US soccer history, the Americans were not only a serious contender on the international scene, but a team that also showed it could get results against high-caliber opponents.

“I think for us it was a big win (against Spain) and it will be remembered that way for years,” said Altidore. “I really think it helped our confidence going into the (2010) World Cup and beyond.”