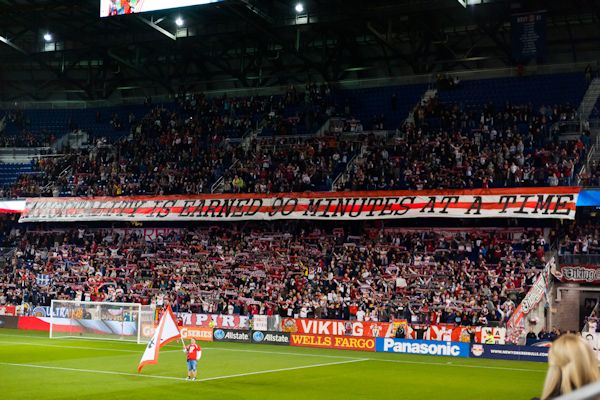 By J Hutcherson – WASHINGTON, DC (Nov 8, 2013) US Soccer Players – I almost feel like starting yet another look at Major League Soccer’s version of standards and practices by saying that I don’t believe the league operates without considering the impact of their choices. Sure, the rumors about adjusting the playoff schedule days before announcing it and the annual trouble getting a schedule out on time suggest otherwise. So do the seemingly random rule modifications, multiple player acquisition policies, and now I feel like I need to rewrite that opening sentence.

After watching three MLS playoff overtimes, maybe we should go ahead and add another example to the list. In theory, what MLS wants is to avoid what they seem to consider the problem of the away goals rule while not reverting to the three-game playoff series. All fair enough since these things should be MLS-specific. MLS takes enough grief for even suggesting that winning the playoff trumps finishing with the best record in the regular season, so why shouldn’t MLS do what it wants to turn that postseason into the best possible competition? That’s also the problem, of course.

Even casual MLS watchers can take a look at the playoff setup and explain clearly and unequivocally why it needs a rethink. It’s too long, for one thing. Tell people it takes over a month to work through playoffs that don’t feature seven-game series like baseball, basketball, and hockey, and that’s going to raise an obvious question. Explaining there’s a break for National Team games probably won’t help. Neither will admitting that this isn’t the same playoff system that was in place even a few seasons ago when the conference finals played out over a single leg. Add in the North American oddity of aggregate goals, and you see where this leads.

Again, the playoff message is decidedly mixed. Is this supposed to be one and done scenarios like we see from the National Football League? Is it proving a team’s worth over a series? If so, shouldn’t that be an odd number of games rather than a scenario that seems likely to need extra time and drag out 180 minutes to 210 and potentially penalties? Why does a playoff setup committed to two-legs to get there then switch to one for the final? Shouldn’t that be two as well? Ok, it’s supposed to be a highlight date for the league, so why not make all the playoff rounds single games scheduled for the weekend. And so on.

At base, what this gets to is the type of story MLS attempts to tell with the playoffs. The NBA, NHL, and Major League Baseball expect their champion to lose on the way to the title. Sweeping every series en route to the trophy isn’t the norm. Games also don’t necessarily have to end. There’s no mechanism to bring events to a halt after a set amount of time in any of those leagues. No continuation of the National Hockey League regular season shootout in the playoffs. No free throws to determine a winner in the National Basketball Association. There’s also no guarantee that the championship game hits the television schedule on the optimal day in the optimal time slot.

MLS takes from that model and imposes the Super Bowl style highlight finale. We know when that game occurs, alongside a playoff schedule where all the teams involved play every game. That becomes the MLS story. Even at the maximum, we know we’re talking about 210 minutes of soccer plus penalties at the far end of what it takes for a team to advance.

So why does it seem like three of the four playoff series hinging on an extra time goal to decide the series doesn’t seem to be as much about the excitement of the postseason as it does about a regular season trend that satisfied very few. We’re talking about that nagging feeling that the final ten minutes or so decide regular season MLS games because that’s when teams tire and make silly mistakes. Raise the level of play, and that fatigue sets in after the initial 180 minutes are up.

It’s going to take more than excitable announcers to turn that into a compelling story. It’s going to take events on the field overshadowing too many years of lackluster MLS playoffs. This is a system that produced wildcard teams playing through the other conference and ending up in championship games. Nobody outside of their fan bases confused those plucky 8th seeds with credible challengers. The league’s answer to conference disparity by limiting wildcard teams by conference only helped to demonstrate the flaws of the system along with the push/pull of that single table/regular season champion ideal.

Does that have to be the ideal? Of course not. Soccer has room in North America to do what it wants, borrow from other leagues, and create that story to push the MLS postseason into the conversation with what we see from other leagues. But just like those other leagues, it’s going to take multiple standout games over multiple seasons with a set system to get there. MLS needs to settle on a straightforward framework and let the teams tell the story. Instead, we’re getting multiple scenarios for how to crown a North American professional soccer champion and it does nobody any favors.