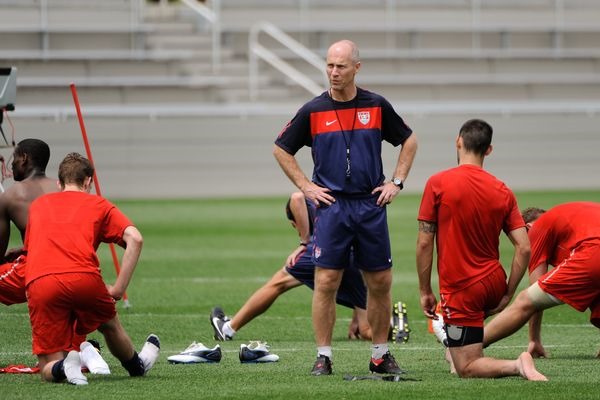 It’s a more difficult question than it seems. “Good”, “pretty good”, or the defensible “very good” might be the easy, mostly sufficient answers, but all of them fail to pin down just where the currently out-of-work Bradley should land for his next head coaching gig. After succeeding in MLS, leading the USMNT to a group win in South Africa, and taking strife-struck Egypt to the brink of the World Cup, Bradley wants to coach in Europe. Reports say he turned down a potentially lucrative deal with the Vancouver Whitecaps to chase that dream, clearly unwilling to compromise with a return to the league that gave him his professional coaching start.

Just like American soccer players, ‘Europe’ becomes a wide concept for a coach. There’s a lot of leagues in Europe, but not a lot of opportunities for US coaches. There’s also the quick comparison to what exists back home in MLS. Is any European job inherently better than any MLS job? Just like with American players, it’s an easy answer when the job is with a club in one of the major European leagues. It’s more complicated with the leagues that don’t get regular coverage on American television.

Bradley’s name is in the mix for the job at Stabaek, the Norwegian club most famous in the United States for being the original team of Mix Diskerud and the one time home of Ricardo Clark. It’s fair enough to compare a team in suburban Oslo that plays in a 7k-capacity stadium with the Vancouver job and favor MLS. That’s not the point. Norway’s Tippeligaen puts three teams into Europe and a fourth through their league cup. Again, following the template set by American soccer players in smaller European leagues, the European stage creates the opportunity.

That might be asking a lot of a new coach with a recently promoted team, but Bradley’s career is all about the challenge. He’s a good enough coach to turn that opportunity into proof. Still, he’s facing one of the most unfair hurdles remaining in American soccer. Bradley is a victim of a rather ridiculous glass ceiling that keeps US coaches out of serious contentions for jobs in the bigger European leagues.

Bradley’s CV (as the British would say) is strong enough that he should be a candidate, full stop, for openings in England. There are only two things working against Bradley that would prevent that from being the case: his lack of professional playing experience (the value of which is debatable) and his national origin.

Bradley is American. To deny that national origin works against him is to ignore the entire history of American soccer players in Europe. It was only in very recent times that Europe began to fully embrace players of American stock. Even then, transfer fees on American players remain depressed relative to their international peers. The old thinking that Americans don’t intrinsically understand the game lingers. When it comes to players, a handful can break through to challenge that belief, and if successful, slowly change attitudes. For coaches, the glass is much thicker, the force needed to shatter it much greater, and there is little possibility of strength in numbers.

The inherent bias against Americans matters more when it comes to coaches than players. Coaches are in charge. They are the outward authoritative face a club. They are responsible for player selection, tactics, and ultimately, winning and losing. When it comes to the fans, the first and most obvious target for dissatisfaction is the manager. Managing a club in a crucible like the Premier League or Championship is almost as much about handling the pressure as it is about picking players and choosing formations. Players can be benched or sold. Coaches can only be fired.

The bar for an American – even one as proven as competent as Bob Bradley – is therefore higher than it would be for a coach from a “traditional” soccer nation. Any chairman or owner who hires an American immediately opens himself up to criticism based on the preexisting bias. If a European coach fails in the job, that’s par for the course. If an American fails, it will be because they are American. American owners face a dilemma over giving a countryman a chance and engendering extra resentment from fans that are already suspicious of the Yank in charge.

Thus, we have the problem of pinning down just where Bob Bradley belongs as a professional soccer coach. He’s uniquely American in his coaching education, something that cannot be separated from his qualifications. He has achieved several notable things, though putting them in context is difficult. It takes a bit of thinking to give Bradley his proper due, considering the conditions under which he worked in Egypt and the way his tenure with the USMNT ended.

We should feel comfortable in saying that Bob Bradley is a good soccer coach. Regardless of where he comes from, or in what league he cut his teeth, he has proven himself to be capable of coaching winning soccer. Unfortunately, that might not be enough to overcome the old prejudices in the bigger European leagues. With that in mind, credit Stabaek for at least opening up the conversation. Again, we’re talking about a small suburban club trying to reestablish itself in Norway and potentially Europe and considering putting an American in charge. That’s no small thing.

It’s impossible to imagine that someone, someday, won’t crash through the barrier that prevents American coaches from being taken seriously in Europe. To be fair, very few Americans have even bothered to try to make it abroad, either because they’re content to remain at home or because they don’t want to put themselves through the inevitable abuse that comes with their provenance.

Bradley is willing to try, having already broken down presumptions with his tenure in Egypt. We can only hope he’s given something approaching a fair chance in Europe.