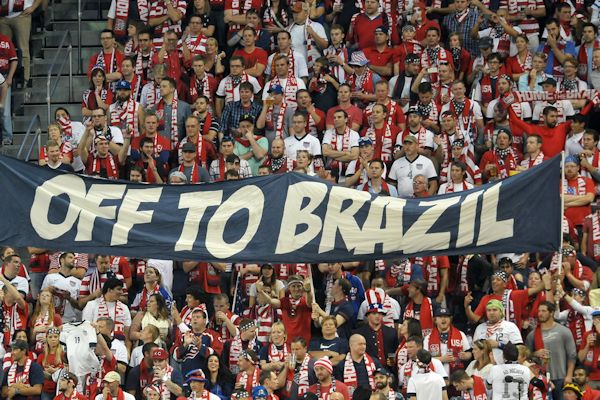 By J Hutcherson – WASHINGTON, DC (Dec 2, 2013) US Soccer Players – Call it the week of anticipation for US soccer fans. On Friday, FIFA puts on a song and dance show in Brazil to answer a simple question. Who plays whom in the group stage of the 2014 World Cup. We already know how tough it can get. Run the scenarios. Figure out how easily groups of death form. Wait to see if the United States somehow manages to avoid an additional degree of difficulty.

You can guess the response should the ping-pong balls not bounce the USA’s way. Some will try to downplay the significance of any group stage. Others will go ahead and pencil in the team for the worst. A few might look at what the US did in tough groups in previous World Cups. There will even be some that go for the gladiator mentality that the US can survive any potential match-ups.

That does nothing to dispel the sense of anxiety. We wait. There’s no other option, no way to somehow convince FIFA that the seeding process is flawed, that the pots need reworking. There won’t be a last minute reprieve when FIFA president Sepp Blatter takes the stage. He won’t be announcing that, on second thought, let’s try doing this a different way.

Every team in the world would prefer the simple path. We can’t know for sure, but it’s normally a safe assumption that a seeded club won’t make it out of the group stage. In 2010, Italy was seeded and finished bottom in a group with Paraguay, Slovakia, and New Zealand. In 2006, when the US barely missed out on a seed under the previous system, all the seeds advanced but the USA did not. In 2002, it was Argentina and France.

This bit of history isn’t just reviving unpleasant memories for the teams involved. There aren’t many unknown quantities left in world soccer. Access increases to the point where even far-flung leagues feel familiar. At full international level, the better teams know each other. The tours, the friendlies, and the club connections make the game smaller. It also makes it tougher to rely on surprise as an excuse for failing.

We saw that throughout qualifying. Mexico’s near miss. France needing a comeback and finding a way. The expectations are high, regardless of what it takes to get out of a group this summer.

It’s the same for each of the 32 teams this week. Waiting, wondering, and trying to maintain perspective. Trot out every coaching adage. Sure, it’s why they play the games. Of course, anything can happen. Hey, it could be worse.

The thing about the 2014 World Cup draw is there might really be a worse. More than one extremely difficult group looms. Seeding isn’t the luxury it normally is when at least one of those pots goes to an over matched host. The FIFA Ranking can insult Brazil all it wants. Had they gone through qualifying, they’d be in Pot 1. There’s just no breaks here. Otherwise, tricky draws will turn into sighs of warranted relief.

That’s as true for the rest of the world as it is for the bright lights of South America and Europe. Contender or not, no team wants to spend the next six months addressing the difficulty of its group. Who blames them? For a seeded team, it’s all downside. For a weaker team, it’s just cycle after cycle of bad news.

With that in mind, consider what this could mean for teams looking to break through at World Cup level. Normally, World Cups held outside of Europe mean opportunity. We saw it in the United States in ’94, Japan and Korea in ’02, and South Africa in 2010. This time? The host certainly won’t be surprising anybody. The near misses just to get to the finals were some of the most successful nations in soccer.

Anxiety all around then. This is a different tournament in 2014, and none of the 32 teams should expect any help.