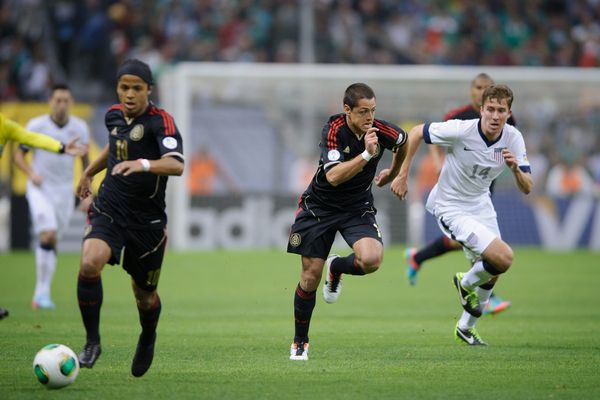 By Luis Bueno – RIVERSIDE, CA (Dec 4, 2013) US Soccer Players – Prior to previous World Cups, Mexico’s pre-draw hopes were fairly strong. Certainly avoiding world powers is always preferable, but Mexico had built up a reputation of being a solid World Cup side and one that others are hoping to avoid in the group stage. Mexico’s 2013 swoon though has had another cost. Mexico’s hopes for the vaunted “fifth game” in 2014 depend wholly on what happens Friday.

Like all other nations in Pot 3, a poor draw will doom Mexico more than six months prior to the first World Cup match. Mexico needs the least challenging path in order to avoid a poor showing in Brazil.

El Tri has participated in each of the last five World Cups, and every time has done some damage and more than held its own. Mexico has survived groups with Italy (1994, 2002), the Netherlands (1998), Portugal (2006) as well as a tricky group with France and the host nation (2010). Certainly drawing South Africa was not as trying as other host nations but consider that every host nation had gotten out of the group stage leading up to the 2010 World Cup.

With such a track record then, Mexico would seem to be more focused on how the potential Round of 16 pairings would go versus the actual draw itself. Mexico has gotten out of its group five straight times but is winless in each of those five knockout matches, losing to Bulgaria, Germany, the United States, and Argentina twice.

Hoping for good fortune in the second round is no longer the focus. There are massive poison pills for El Tri ahead of the draw, but there are teams who will provide life for Mexico.

While playing against the best tends to bring out the best in Mexico, this beleaguered squad may not do well knowing that Germany or Spain awaits them in Brazil. Germany has never finished worse than a quarterfinal so if there is any lock to get out of the group stage, it is the Germans. Belgium’s up-and-coming squad is a dangerous team that would pick apart Mexico and the kind of squad that Mexico could easily overlook.

Argentina might seem like a tasty rival that could have Mexico hungry for revenge, but the Argentines have been successful against Mexico in do-or-die matches. This simply isn’t the Cup for revenge against Argentina, especially considering how many of their fans can make the trip to Brazil.

Aside from the North African representative, Mexico would do well to avoid Africa altogether. A strong Mexico side would struggle with the talent and pace the likes of Ghana and Ivory Coast possess. Cameroon and Nigeria have not been as strong in recent World Cups but Mexico struggled terribly against both South Africa (2010) and Angola (2006).

There are more teams to avoid in this pot than any other as there are more traditional European powers here. Certainly European teams have not often fared well in World Cups outside of Europe. Italy and France failed to reach the knockout rounds in South Africa 2010, for instance. But all of these nations will be looking for some sort of redemption. Tactically, Mexico would struggle to match up against these sides too. While Mexico has survived Italy twice before, Mexico looked quite poor against the Italians on Brazilian soil during the 2013 Confederations Cup.

Brazil might be the team that every nation hopes to avoid but if there is one global elite that Mexico does not fear, it is the pentacampeao. Mexico has fared well against Brazil in previous tournaments, including the 2012 Summer Olympics. While that was a youth national team, Mexico’s success there was carryover from the confidence they gain when facing Brazil.

Uruguay or Colombia on South American soil may not seem simple, and while it won’t be playing those teams will bring out the best in Mexico. El Tri has done well in Copa America, and some of that bite and grit will surely be on display should El Tri draw these two.

Switzerland is the most-wanted opponent out of Pot 1, and Mexico is no different in that regard.

Much in the same way Uruguay or Colombia would bring out the best in Mexico, so too would Ecuador and Chile. Algeria is a notch above a pushover.

The former Yugoslav republics wouldn’t strike much fear into Mexico, even a depleted version of the old Mexico. Neither would Greece. Mexico’s confidence would grow when seeing these rivals come out onto the field alongside them.