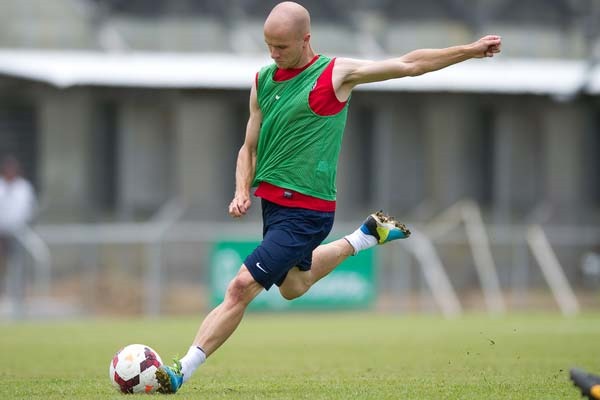 By Charles Boehm – WASHINGTON, DC (Jan 24, 2014) US Soccer Players – A gaggle of USMNT players are among the hundreds of MLS players reporting to their clubs this weekend to begin the 2014 preseason, including a few particularly high profile faces whose recent homecomings will be keenly watched storylines in the year ahead.

These two statements are more closely related than they may appear.

Not long ago, US Soccer’s exports to top leagues overseas were so few and far between that their every move, every minute of playing time, was watched with bated breath by the soccer heads back home. Each member of that modest band felt precious in the eyes of fans, like a fragile paper boat pushed out into rough waters, set on a course few others had navigated.

The ranks of expats grew over the years, and so did the ambition, and the audience. Still, the vague sense remained that these were our best and brightest, a true foreign legion, flag-bearing envoys sent from our outpost to rarefied worlds closer to the sport’s beating heart.

The narrative that grew from this is familiar, especially among observers with doubts about MLS. As they see it, the adolescent-aged professional league back home’s pioneer practicality always looked crude compared to the Old World’s cultured competitions. To haul us into the elite, our explorers had to keep pushing higher, colonizing more and more top European leagues in greater numbers. They were the ones spreading word of our rising soccer nation.

If this plotline hadn’t already been exposed as the woefully oversimplified fable that it is, the comings and goings of USMNT members over the past six months should have well and truly put it to bed.

The initial reaction to big-ticket moves like Clint Dempsey’s and Michael Bradley’s stunning transfers back to MLS included no small degree of ambivalence, even disappointment, among fans accustomed to rooting – with something like a missionary’s zeal – for Yanks to climb ever higher into the “Big Five” leagues of England, Germany, Spain, France, and Italy.

“How will we ever earn respect on the global stage?” they fretted. “Where is their AMBITION?” others wailed.

It should be obvious that individual players’ career decisions are hardly ever made in the vacuum of wonkish debates like “What’s best for American soccer.” However, the power of the “foreign legion” fable is such that it can obscure basic realities of economics and life.

For a pro player as much as any other working person, money means more than bigger houses and fancier cars. Money means choices, and choices mean freedom. And the two paragraphs at the top of the page underline the extent to which more pathways, not fewer, are opening up for talented American players. Those legionnaires in distant locales are finally beginning to believe that the league back home values them enough to, someday, force a tough decision about calling time on the foreign adventures that are exhilarating for some, but exhausting for others.

When Bradley transferred from the MetroStars (now New York Red Bulls) to Dutch club Heerenveen at age 18 almost exactly eight years ago, neither he nor anyone else paying attention would’ve dreamed that he’d return now, and at the price Toronto FC have apparently paid for his services. As a graduate of the Bradenton Residency Program, Bradley’s been away from his family for a decade now. No one should in good conscience begrudge him selecting a reportedly lucrative offer to become the face of a wealthy, ambitious franchise.

Back when he first left, it would have been only faintly realistic to think that a prospect as young and relatively unknown as Palmer-Brown would be the target of such a bid from such a club as Juve. But despite coach Jurgen Klinsmann’s statement earlier this month that there is presently “no demand” for US internationals in the overseas market, it appears that our worst fears about other countries’ biases against American players may not be returning to haunt us just yet.

Michael Parkhurst found a warm reception in MLS earlier this month after a frustrating stint in Germany. If reports elsewhere are accurate, it’s only a matter of time and final haggling before Stoke City’s Maurice Edu rejoins MLS.

On the flip side of the coin, Duke University star and longtime US youth international Sebastien Ibeagha looks set to carve out a promising situation in Scandinavia. His decision wasn’t helped by MLS’s byzantine rules after a Homegrown invitation from the Houston Dynamo.

Others with similar frustrations (think Herculez Gomez and Paul Arriola) have settled nicely in Mexico. While only the most devoted fans are fully aware of it, a steady stream of adolescent US prospects are catching on in the youth systems of major clubs around the world. To name just two, Joshua Perez at Italy’s Fiorentina and Emerson Hyndman at Fulham FC in England. Palmer-Brown will surely have more such offers lobbed his way from abroad, should he someday grow disillusioned with his apprenticeship at the defending MLS Cup champions.

The US soccer scene has always been chaotically messy in terms of clear paths for top talents to tread from the grassroots to the bright lights. That can make it a treacherous progression for some. Yet, it also means that individual players can usually find alternatives when conventional routes are not available or compelling for them.

Forget the foreign legion. Root for the free agents.