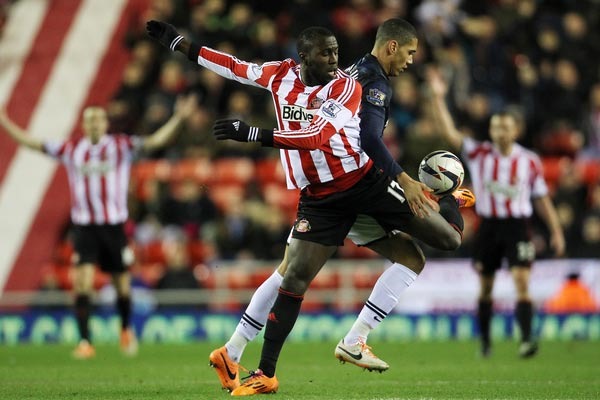 By J Hutcherson – WASHINGTON, DC (Jan 8, 2014) US Soccer Players – It’s nice of Manchester United to turn itself into an open goal this season. Whatever your list of gripes about the state of modern soccer, they probably apply to United. How bad is it? Yesterday’s loss in the opening leg of the Capital One Cup semifinals to the team with the worst record in the Premier League wasn’t much of a surprise.

How bad is it? Even though only a few points separate the top of the table, including Manchester United in that scenario is insulting to the better teams. From defending champions to out of reasonable consideration for a title push. Feel free to put a fall of 2013 date on that, since this isn’t a recent development.

Making this all the more unsettling for United is how few people see an obvious answer. ‘It’s the manager, stupid’ isn’t picking up a lot of traction. This is Premier League soccer after all, where it’s always the manager. The ‘hired to be fired’ cliche hangs over everyone in the league. There’s no such thing as time and space for slow growth anymore, if there ever was. The expectations throughout the table are unreasonable, rarely account for plain bad luck, and stick to time frames that aren’t realistic.

Hey, that’s life at this level. Few managers get to truly make squads their own in time to avoid an exit. Whether or not that exit is unexpected is a good question. Managers on their way out of a losing team normally blame their transfer budgets, unrealistic expectations, and our old friend bad luck. Who can blame them for not wanting to do what their bosses normally do and look squarely at the wins, losses, and draws. Even the moments of self-awareness normally include the kind of professional shrug that demonstrates the difficulties of the job.

Manchester United might not have the luxury of that simple of a reset. Push expectations to the extreme, and you get a fan base, the customers of the club, who expect the same thing as upper management. In a results oriented business….

United know what happens to clubs in search of breathing room. It rarely happens on their own terms. Once upon a time giants of English soccer can spend seasons ‘consolidating’ in the wrong half of the table or even in the wrong league. Sometimes, they fall so far they no longer bother anybody in the topflight.

Leeds United might be the scary story Premier League powers don’t want to hear too close to bedtime, but they’re far from an isolated example. Teams fail, sometimes without the available finances to buy an escape. Even with the ability to spend, sometimes the right players and personnel aren’t available. Milan’s current Serie A season should have the giants of Europe concerned. On the eve of stricter Financial Fair Play regulations, the game is changing. In the Premier League and Champions League era, money normally helps absorb any problems, but this time the money is the primary issue.

As much as any club in Europe, Manchester United benefits from the big money game of elite professional club soccer. In many ways, they’re one of the primary architects. That included managerial longevity.

What’s interesting about the current state of United is that it makes Alex Ferguson’s tenure look even better in retrospect. Ferguson is a giant of the game, transforming a role in an era where things changed quickly. The only contemporary knock against Ferguson is the responses to his book letting the rest of us know that his training sessions could’ve been better. To paraphrase former National Basketball Association star Allen Iverson, ‘practice… we’re talking about practice?’

Nope, we’re talking about trophies and sustained dominance and that’s the story of Manchester United. It’s the qualification to be a true giant of Europe, the reason players from a competitive Bundesliga club leave for the biggest Bundesliga club. The reason a club like United not only still competes with but also beats the English teams taking advantage of the benefactor model. Well, until 2013-14.