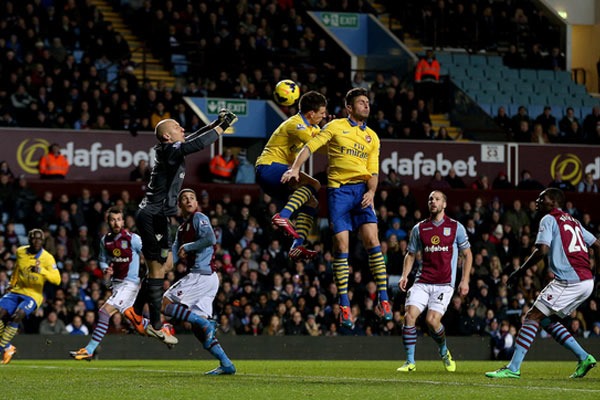 NEW YORK, NY (Jan 14, 2013) US Soccer Players – Two quick goals were the difference as Brad Guzan’s Aston Villa lost 2-1 to Arsenal at Villa Park on Tuesday. Arsenal scored in the 34th and 35th minutes, with Villa’s Christian Benteke pulling a goal back in the 76th. The game had to be stopped for six minutes early in the first-half after the ball hit Villa’s Nathan Baker in the face. Baker suffered a mild concussion and had to be subbed out. Villa finished with 11 shots on goal to Arsenal’s 8, putting 5 of those on frame to Arsenal’s 4. Arsenal had a 5 to 3 advantage on corner kicks.

Villa are 11th in the Premier League table, tied on points with 10th-place Hull City and seven points behind 9th-place Southampton. Arsenal take a one-point lead at the top of the table with the win.

“The crowd is your barometer,” Aston Villa manager Paul Lambert said. “It’s about getting them going, which we did. The goal gave us a huge lift to go again. But we were playing against a right top side. They have great ability and cost a lot of money. They are vying for the title. They are vying for the Champions League. But we certainly gave them a fright, that’s for sure.”