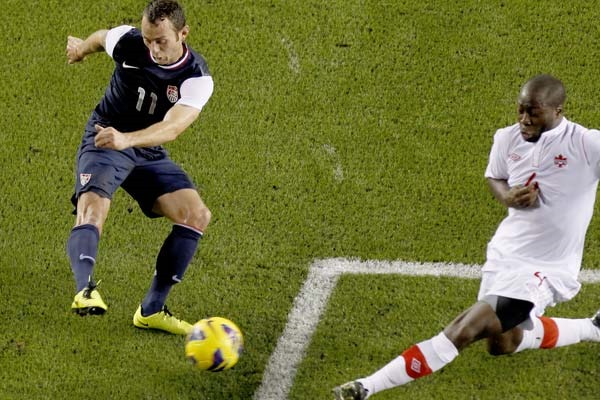 By J Hutcherson – WASHINGTON, DC (Jan 24, 2014) US Soccer Players – It’s easy to overlook how CONCACAF divides its part of the world. FIFA politics and scandal makes the Caribbean Football Union notable. There’s also the Central American Zone or UNCAF that is perhaps the most competitive of the three divisions. Then there’s the North American Zone or the North American Football Union.

If you’ve never heard of the North American Zone by either of its names, not to worry. There are only three countries involved and it doesn’t have any qualifying tournaments. Unlike the other two, all three teams qualify directly for the Gold Cup. Canada, Mexico, and the United States, with one of those teams not like the others.

Canada’s weaker position in CONCACAF soccer is nothing new. The reasons Canada hasn’t followed the USA’s example since that program’s push into prominence are numerous. The country has leadership issues when it comes to the politics of international soccer, competitive issues on the field, and only relatively recently several true first division teams to choose from as an aid to help develop Canadian soccer players.

The Canadian Soccer Association’s announcement of a new strategic plan needed a hook, something to draw in both the home support and everybody else. New directions in coaching weren’t going to do it. Commitments to infrastructure we can take for granted. Find a country that doesn’t want to grow the game, and you see the problem. For most of us, it’s the same bureaucratic generalities. Well, until Canada announced they intend to bid for the 2026 World Cup.

Point 3.4 of the strategic plan reads: “Successfully prepare and submit a bid to host the 2026 FIFA World Cup.” They’re not the only CONCACAF country potentially eyeing 2026, and it’s probably safe to assume the rest of CONCACAF’s North American Zone took notice.

After FIFA’s last round of World Cup hosting decisions, nobody in world soccer takes anything for granted. Alternating hemispheres may or may not happen. Confederation priority may or may not be at issue. Things could change.

For CONCACAF, that should include the basics of their setup. The North American Zone, North American Football Union to its friends, is obviously underutilized. It exists mainly as a description and a rarely used acronym. When two out of the three countries involved are the most successful in the region, maybe that’s part of the point. CONCACAF has no choice but to help the smaller nations if there’s ever going to be competitive balance.

CONCACAF has tried several things to increase the level of competition, but that rarely centers on the North American zone. Why should it, when it contains the most prosperous countries in the region? Still, we know from the USA and Canada that money to spend doesn’t necessarily mean growth. When the North American Zone had to qualify to reach the Confederation tournament in earlier eras, the USA was regularly third-best.

That’s not a lesson for Canada to be like the USA. Markets and business change, and the opportunities the USA took advantage of in the late 80s aren’t the same for Canada in 2014. There’s a familiarity to any publicly announced strategic plan simply because at base the idea is to do better. Any improvement at all will draw a sharp contrast to what exists with the Canadian Men’s National Team programs and what’s needed. Into this, the Canadian Soccer Association inserts the idea of Canada as a good host.

There’s certainly enough to backup that point. Their FIFA tournaments worked and the expectations are high for next year’s Women’s World Cup. Yet from FIFA or even CONCACAF’s perspective, it’s not a step-by-step to go from hosting some tournaments to THE tournament. It also confuses the North American Zone, where the other two members rightly considered themselves at the top of the line in CONCACAF to host the World Cup.

For Canada, where part of the strategic plan is taking more of a role in regional and international soccer politics, it’s a bold step. After all, Qatar already showed that it’s possible to shift the conversation from what happens on the field to what happens in a vote. That doesn’t mean Canada’s ambition makes sense.