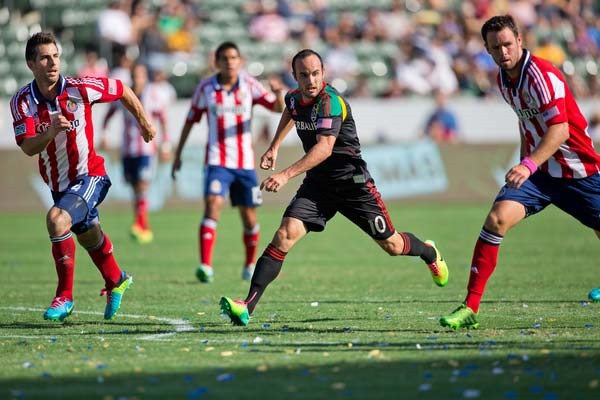 By J Hutcherson – WASHINGTON, DC (Jan 27, 2014) US Soccer Players – With Tim Howard’s Everton meeting Liverpool at Anfield on Tuesday, MLS fans get another look at the kind of derby game that’s a hallmark of soccer in other countries. The recipe is simple. Two teams in close geographic proximity playing each other in the same league. In Liverpool, a park separates the two clubs. In London, derbies are easier to define by adding a direction to the city name. So there’s a North London derby along with the other permutations for a metropolitan area with 13 professional soccer teams. Nothing like that exists in MLS, or any of the other US pro sports for that matter, so by necessity the model changes.

USA Derbies in other sports

Though colleges are full of the kind of derbies familiar to soccer fans all over the world, we’re focusing on pro sports. Baseball is the oldest of the American professional sports and the limits of transportation and population centers meant several cities used to have more than one professional baseball teams. That’s half the recipe for a derby right there, but it didn’t work that way in baseball. Inter-league play is a relatively new innovation. Prior to that, a city with two teams had one in each league. The only time they’d play games that count is if both advanced to the World Series. New York City was the exception with two National League teams until the mid-1950s, but it wasn’t a model other cities considered lucrative. Normally, one team suffered while the other succeeded in the old era of sports business when attendance was the most important moneymaker.

With baseball as the example, the other professional sports also tended to avoid putting two teams in the same market that regularly played each other. The Jets and Giants are in different conferences. In cities with two teams in a single pro sport, there’s almost always the rich and poor distinction. The Los Angeles Clippers don’t have the resources of the Lakers. The Nets aren’t the Knicks.

The one obvious exception is the National Hockey League. The only pro sports league to have a Long Island franchise, the Islanders, New Jersey Devils, and the New York Rangers play in the same division. With the Islanders moving to Brooklyn for the 2015-16 season, the NHL will have the three teams in closest proximity in North American pro sports. What that means in terms of fan support and the hyper-local derby games we see in other countries is certainly helped by putting a Rangers – Devils game at Yankee Stadium. Then again, the complaints over conditions overshadowed the spectacle on Sunday.

For North American sports, that’s an important point to make. The NHL moves games outside because it increases interest in the game. That is, until it stops working.

We already know there’s only one true MLS derby. The Los Angeles Galaxy and Chivas USA play in the same stadium in the same city. It’s MLS’s version of a hyper-local derby playing out in Carson, California. The only problem is the disparity between the two teams. The local market embraces one. The other struggles to top five figures in game-by-game attendance. There’s no getting around that with any attempt to turn the ‘clasico’ into more than it is.

MLS hasn’t been shy about promoting their version of rivalry games. The league drops the derby title due to the distance between their clubs but keeps the idea that closeness counts. It might be a multi-hour drive or a plane ticket, but it’s still a rivalry game. Even better if there’s a trophy attached to it.

Playing for rivalry trophies owes more to the fan bases of the various clubs than MLS itself. Taking a page from college football, fan groups started adding an extra bonus. The problem is when the schedule doesn’t cooperate. One team ends up in another conference. They don’t play each other enough over the course of a single season. New teams change the interplay between older teams.

That’s the situation MLS is building in New York City. Two teams in the wider market, but only one putting NYC in its name and planning on playing within the five boroughs. Meanwhile, the older team with New York in at least some part of its name since 1996 waits.

Given the precedents from other sports of the biggest rivalries paying little attention to geography, maybe MLS doesn’t need to be different. LA – Boston in the NBA. Dallas – Washington in the NFL. The Original Six teams in the NHL acting as each other’s biggest rivals.

MLS’s stress on soccer definitions is fine, laudable even. Though there’ve been some hesitation and missteps to get here, MLS in 2014 is a lot closer to the European model than it’s ever been. Those wanting the additional steps taken quickly tend to overlook what’s good about American pro sports. Rivalries don’t necessarily have to have a geographic center. Clubs don’t have to exist right on top of each other, potentially stressing a market that wasn’t supporting a single fulltime professional soccer club between 1985 and 1995. It’s all right if two teams close to each other are more Everton – Tranmere Rovers than Everton – Liverpool.

The games that draw in MLS don’t necessarily need a hook. They just need to be good games. It takes the pressure off of rivalry based on nothing else than proximity, allowing for competitive rivalries to be as important as not liking the city with an MLS team closest to you.