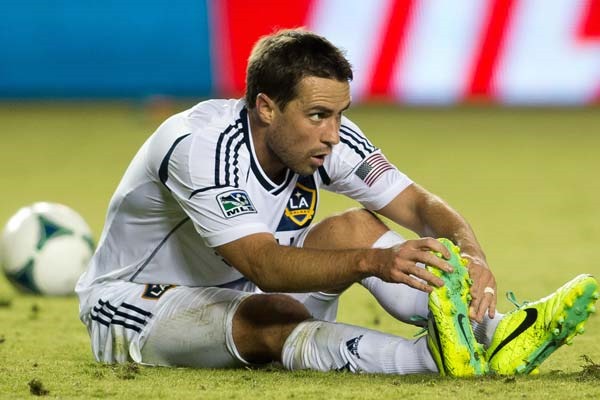 By Luis Bueno – CARSON, CA (Jan 29, 2014) US Soccer Players – In the early stages of the LA Galaxy’s preseason camp, the club is lacking all but one element typically found much later in the season. The club does not have its full complement of players, nor does it have its depth chart or roster finalized. There is, however, a sense of urgency not commonly found in late January.

The Galaxy however face a historic challenge in less than two months and thus have tried to hit the ground running in 2014. The Galaxy will play Tijuana in a CONCACAF Champions League quarterfinal series in mid-March and the games have shaped the Galaxy’s approach.

“It’s in the front of our mind actually,” Galaxy defender Todd Dunivant said. “This is why we’re going so hard straight out of the gate. We’re not easing too much into this. We really want to be ready for that.”

A glance at Tuesday’s training session – the first session open to media – revealed the club’s urgency. An 11-on-11 scrimmage highlighted the session, and the pace and intensity of the scrimmage was something typically seen in the middle of the season. Also, a contingent of Pumas UNAM officials took in part of the session and chatted through a translator with Galaxy coach Bruce Arena afterward.

The Galaxy will travel to Mexico City next month and will play Pumas in a closed-door scrimmage on Feb 11 as part of their preseason slate. Pumas will likely give the Galaxy a feel of what their series against Xoloitzcuintles will be like.

“We’re putting a lot of stock into (CONCACAF Champions League),” Dunivant said. “It’s an important tournament and Tijuana obviously is a close rival.”

The Galaxy’s challenge is to try and get into playing shape as quick as possible. With several key new acquisitions, including former Borussia Monchengladbach striker Rob Friend and Fluminense loanee Samuel, the club must figure out how incorporate the new pieces and decide how this team wants to play this year.

“It seems like there’s a lot of turnover every year and this year was a little more than normal,” Dunivant said. “We have our work cut out for us to gel the team. I think the good news is that we’ve still got our core group. That’s what we base everything else off of.”

One of the key pieces only joined the Galaxy Tuesday and trained mostly on the side. Ireland international Robbie Keane is coming back from a pair of surgeries on his Achilles but said he would be good to go by March.

“I’ll be fit well before then. If I really wanted to, I probably could have trained now, but we have to be clever and make sure that this doesn’t re-occur again,” Keane said. “So far, it feels good and strong. It’s nice to wake up in the morning and not take an hour to walk to the bathroom.”

Even though Landon Donovan and Omar Gonzalez were not present at training – the duo were on another field on the StubHub Center grounds, training with the USMNT – the club’s confidence was high.

“You have to always go into a season at the start very positive, thinking you’ve got a very good chance of winning the championship because if you don’t believe that, then there’s no point in being here,” Keane said. “I’m sure that will be driven into us in the next few weeks.”