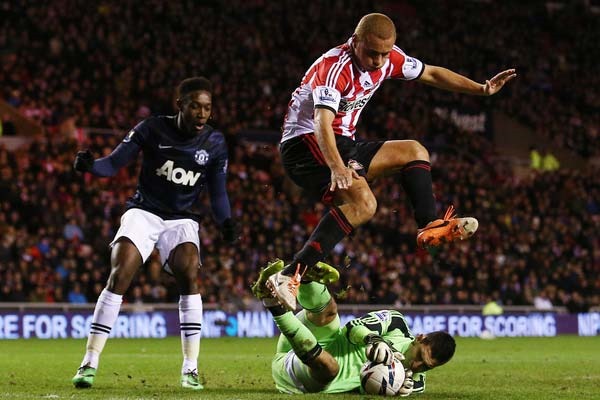 By J Hutcherson – WASHINGTON, DC (Jan 22, 2014) US Soccer Players – In the skewed world that exists at the highest level of European club soccer, it’s easy to feel a little sorry for Manchester United and AC Milan this season. Even for those sick of the idea of super clubs, super leagues, and breakaways, United and Milan are hallmark teams all over the world. In other words, both are truly super. They develop and buy superstar players, push the transfer market, and normally succeed. When a team of their size slips, it quickly becomes the story of the season.

Right now, Manchester United sits in 7th-place in the Premier League, six points out of the final European slot. They can take a direct route to Europe in 2014-15 by getting past Sunderland and Manchester City in the Capital One Cup, but we’re talking about Manchester United attempting to make it into a qualifying round of the Europa League. At the same time, this 7th-place club is still alive in the Champions League, with a far more manageable Round of 16 meeting with Olympiacos than Manchester City – Barcelona or Arsenal – Bayern Munich. This is a struggling club by their own standard. It’s also one that could still become champions of Europe this season.

That duality of struggle vs. opportunity is what makes the concept of the Super League so disconcerting for many fans. Imagine that league, 16 to 18 teams, closed since none of them would want to vote another out, and filled with the world’s best players. We already have the super clubs to fill the slots. What’s needed is the framework. We don’t know what being a mediocre or bad Super League team really means. What we do know is what happens when a super club starts to slide.

For United, it’s an almost undignified search for alternatives to competing for the Premier League title. For AC Milan, it’s trying to figure out why so many teams happily slotted themselves between 11-place Milan and the top of the table. Turin’s other club is in 7th-place right now. Genoa was the team finishing just above the relegation zone last season. Now, they’re just above AC Milan.

Like Manchester United, AC Milan have alternative routes to salvage something from this season. Milan are also still alive in their domestic Cup, starting a quarterfinal series with Udinese in the Coppa Italia. Udinese isn’t the same club that finished 5th last season, but nothing comes easy for Milan in 2013-14.

“We want to progress,” Milan assistant coach Mauro Tassotti said about the Coppa Italia. “The Italian Cup seems the best route to qualify for Europe next season. We’ll play with a side to win, every player that takes to the pitch will have to have keep this in mind.”

AC Milan’s new head coach Clarence Seedorf spoke on Sunday about an immediate mindset change, referring to seeing ‘the glass as half full.’

“We ‘re all very lucky to be able to do our job almost as if it was a hobby,” Seedorf said in his first press conference. These were my first words, to bring back joy and enthusiasm about playing football. I think that difficult moments have to be analyzed with a view to finding solutions and never losing sight of the quality that we have here. The team definitely haven’t expressed their quality in terms of the numbers they’ve produced but that can happen and I have no doubt that the situation will come back to what it once was. It all depends on how you work, you need enthusiasm and to get people back to the stadium with a convincing style of play. It’s easier to get results playing well.”

The problem both of these clubs face is the ease with which European soccer isolates underachievers. There are enough options, enough stories to follow, and enough big clubs playing well to explain away struggling giants.

Serie A would undoubtedly prefer their massive clubs to play that way season after season. It generates revenue, builds value, and pushes the entire league up the table compared to its European competitors. The Premier League built itself around a handful of clubs and Manchester United were one of those from the beginning. United isn’t even allowed the excuse of giving a new manager time. They don’t work that way. It’s why David Moyes can face criticism about whether or not he’s experienced enough for the United job after so many years of pushing Everton (a full-fledged Premier League club) into contention.

“We’re going to go out and do everything we can to get through,” Moyes said of the now all-too-important Capital One Cup semifinal. “I want to give the supporters something to cheer about. There’s not been an awful lot and I’m fully aware of that….”

What United and Milan are also aware of is how their leagues move on without them at or near the top of the table.