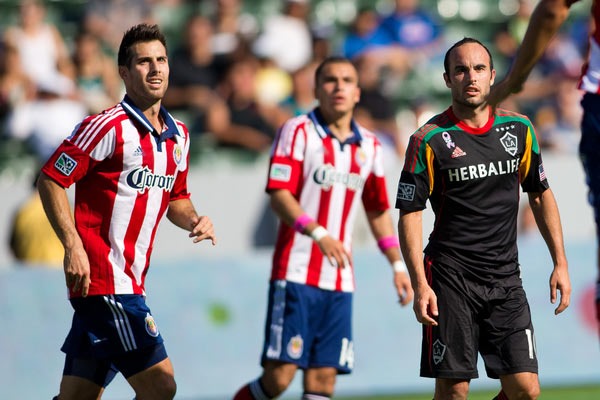 By Luis Bueno – CARSON, CA (Feb 26, 2014) US Soccer Players – After nearly a decade of negativity and outright hostility, the naysayers won.

Chivas USA will indeed rebrand and cease to exist. Some other club with some other name will take up the role as Los Angeles’ other MLS team and new challenges will ensue.

While the hopes and dreams that the notion of Chivas USA once held are all but gone, the club still has one season left before finishing the engraving on the MLS club’s tombstone. While Chivas USA will without a doubt carry the label of failure, what the team does in this final season could have a say in what sort of legacy it leaves behind.

There are a few things Chivas USA and its supporters can do to ensure that the legacy left behind is a positive one.

1. BOFO BAUTISTA MUST BECOME A STAR

Had Adolfo “Bofo” Bautista joined Chivas USA in 2007 instead of 2014, perhaps things would have turned out differently. The club would have shown then that they were indeed interested in fulfilling their own rhetoric and building an MLS club with Mexican flair.

While Bofo joins much too late to make a lasting impact with the club, he could make his mark within the league and carry the club’s flag as the ship sinks underwater.

Bofo has all the makings of a star. He’s a polarizing figure who has endeared himself quite nicely to Chivas faithful. His hairstyles have drawn attention, both positive and negative, as has his attitude and behavior. Still, what helped him stand out has not been his appearance or demeanor but rather his ability. Given his play in preseason thus far, Bofo still has quite a bit of ability left.

Does he have enough ability to challenge for the MLS lead in goals? Perhaps not, but if he can score double-digit goals and becomes the club icon that he should always have been, then he will have done his part to help the club win this season. That would lead to a lifetime of what-ifs.

What better way to end a club’s existence than to go out on a high note? If Chivas USA’s last-ever home game is a playoff match, it would be akin to a player with gas still left in the tank retiring after a championship.

A lot would have to happen in order for Chivas USA to reach the postseason, perhaps too much, so a more realistic goal then would be…

3. HAVE MORE WINS THAN LOSSES

There is certainly some optimism surrounding the club. The off-season brought improvements in key areas – a beefed-up defense, Mauro Rosales and Bautista spiced up the attack. Half-seasons of Carlos Bocanegra and Erick “Cubo” Torres will help each player hit the ground running in 2014. Dan Kennedy is still around and the team’s preseason results have been promising.

Only four times has Chivas USA finished with more wins than losses – from 2006 through 2009 – and the club has not been close to that mark at all in the last four seasons. There is no better way to stick it to the non-believers than by winning.

4. WIN THE SEASON SERIES OVER THE LA GALAXY

At one time, Chivas USA and the LA Galaxy had a rivalry. Chivas USA nabbed their first-ever win over the Galaxy in June 2006 and won two matches and the only season-series victory a year later. The rivalry was on the cusp of something special after those victories in 2007. The Jesse Marsch-David Beckham confrontation and Chivas’ 3-0 wins spurred the Galaxy to react, but Chivas were unable to sustain any momentum. The Galaxy squashed Chivas USA’s golden era with a playoff-series victory in 2009 Chivas USA never recovered, with just one win in six years over the Galaxy.

While history will always show the Galaxy’s dominance over Chivas USA, a win in the final series will be a smudge on that mark, a stain the Galaxy will never remove.

No matter how well the club did on the field, attendance was always an issue for Chivas USA. Traditionally, that attendance has been poor.

A year ago, though, the club redefined poor. Only an average of 8,366 turned out for Chivas USA matches. Still, it would be great if, even for novelty sake, Chivas USA were able to draw more than 20,000 for a match. Perhaps that will be the case when the Galaxy “visit” StubHub Center, but the club should still aim for one big crowd.

Part of the drop-off in attendance from 2012 to 2013 was the club’s lack of ticket giveaways. In the seasons leading up to 2013, Chivas regularly gave tickets away to schools and other such organizations. While there may not be a large interest in Chivas USA, people will turn up for free soccer. If Chivas can host a non-Galaxy match with 20,000-plus in attendance, and more than half were there for free, there would be no harm in that. Padding attendance numbers, after all, is the MLS way.

A near-capacity crowd in a meaningful October match with Bofo scoring a pair of goals? Now that would be going down swinging.