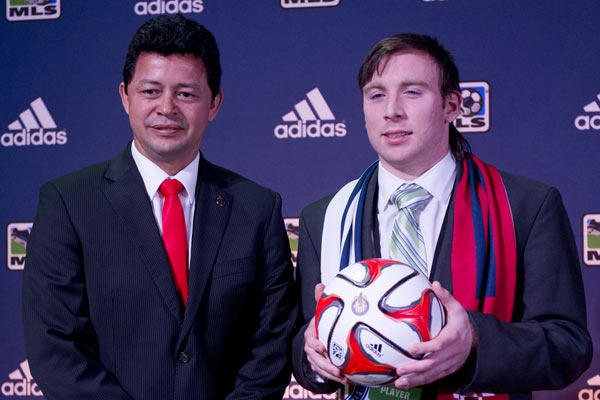 By Luis Bueno – CARSON, CA (Feb 19, 2014) US Soccer Players – Chivas USA’s best days are well in the past, and soon the club’s name and identity might be too.

Despite making a push to connect Chivas USA with Chivas Guadalajara, Jorge Vergara said recently that he is indeed studying the possibility of a rebrand with his MLS club.

Turns out, Chivas USA and Chivas didn’t connect as hoped. Add in the lagging attendance, poor play, and negative stigma attached with the MLS club and it might not be a benefit for the parent in Liga MX.

“We’re studying (a rebrand) because in reality the failures over the last four years have tarnished the name of Chivas in Los Angeles,” Vergara told ESPN.

So what might Chivas USA look like with a possible name change? The names “Los Angeles SC” and “Los Angeles F.C.” are now trademarks filed with the US Patent and Trademark Office. Either name would help the new-look club connect more with Southern California. That’s something the Chivas name failed to do, particularly after the club hit rock bottom on the field.

Chivas USA have been abysmal since losing to the rival LA Galaxy in the 2009 MLS Cup Playoffs. Until that point, the club had pieced together four strong seasons, marred only by earlier-than-expected playoff exits.

Once the 2009 season ended, so too did the club’s winning ways. A revolving door with both the coaching staff and front office coincided with the club’s plunge into the MLS abyss.

Logos and club names have zero effect on the field but a rebrand could energize this moribund club. A black cloud seemingly hovers above Chivas USA as progress has been nonexistent. The club’s effort to reconnect to Guadalajara resulted in the hiring of Jose Luis “Chelis” Sanchez Sola and an influx of Mexican league veterans. Losses piled up, the club dismissed “Chelis”, and most of the veterans did not last long either.

Expectations, though, come with having the name Chivas attached to the club. Since Day One, onlookers expected Chivas USA to have a pipeline of talent coming from Guadalajara. Chivas would send both young and untested ready to develop at the expense of MLS as well as proven veterans to bring in the crowds and add some leadership and experience. Those expectations hardly ever came to fruition. The best young player to come up from Guadalajara is the current young star, Erick “Cubo” Torres. Prospects did not often come to Chivas USA, and those who did flamed out.

Veteran Mexican stars were plentiful in the early days but Francisco Palencia and Claudio Suarez are long gone from the club. Adolfo “Bofo” Bautista is the club’s first bona fide Mexican star to join the club since his two former Tricolor teammates departed.

Had Vergara ever made an honest attempt to create a player pipeline between the two clubs, perhaps the relationship could have been different. As it stands, though, the name Chivas has been mostly a hindrance to the potential growth Chivas USA could have had.

In order for a new-look Chivas USA to really feel re-energized and like a new club, the new-look club would have to move into its own stadium. The StubHub Center is and always will be associated with the LA Galaxy.

New colors, a new name, and logo would be a massive step forward for the club. There’s no guarantee that success will soon follow. However, the crucial difference is LA’s other MLS club would no longer be hopelessly intertwined with issues of identity and other such nonsense connected to another team playing in a different league.