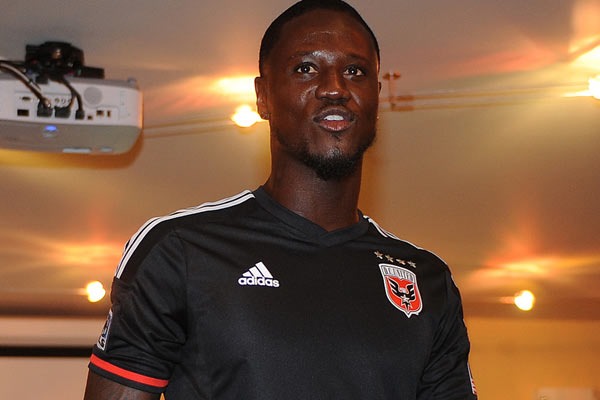 By Jason Davis – WASHINGTON, DC (Feb 25, 2014) US Soccer Players – After several years of DC United’s iconic jerseys sporting the logo of iconic German car maker Volkswagen, the MLS club has a new shirt sponsor. Leidos, the offspring of gargantuan defense contractor SAIC, will front DC United’s shirts as part of a “multi-year” agreement. As with most things MLS, we’re short on deal points, but one is unavoidable. An MLS club isn’t going to enter the 2014 season with a blank space on the front of its shirt.

Maybe it’s because the MLS season doesn’t start for another 12 days and we’re all bored. Maybe it’s because DC United’s fan base achieved a certain level of entitlement. Either way, the move is currently subject to serious discussion and rampant criticism. Criticism. Of an arrangement that brings an MLS team much needed revenue in a sport still clawing its way to respectability on both a national and local scale.

Have MLS fans really earned the right to bury the “beggars can’t be chooser” mentality when it comes to shirt sponsorship?

DC United signed a new shirt sponsorship in the aftermath of Volkswagen’s departure that A) fills the void from a financial perspective B) resonates within the local market, and C) doesn’t pull DC United’s brand down. In MLS, don’t take that last point for granted.

“At least it’s not another….” is admittedly a low bar, but it’s a bar worth acknowledging. So is the willingness of any sponsor to spend what’s necessary to be the ‘presenting partner’ of an MLS team.

The phenomenon of shirt sponsorship is unique to soccer in this part of the world. Taking cues from (mostly) European examples, American soccer fans are more inclined to accept advertising on their team’s uniforms than fans of other sports here.

In fact, soccer fans almost universally demand their team have a shirt sponsor. It’s those foreign leagues again, where the practice has been de rigueur for decades.

Somehow, advertising for a third party via the most sacred of team symbols — the very shirt the players wear each time they represent the club on the field of play — proves a soccer club’s worth in a way that validates the club, and therefore, the fans.

Rather than be stigmatized by ads on their uniforms, the way any team in any of the other major American sports might be, MLS teams are stigmatized for their shirts not hosting ads.

During a recent Q&A session on Reddit, Colorado Rapids president Tim Hinchey fielded query after query about the Rapids blank shirtfront and the possibility of a sponsor. The lack of a jersey sponsor for the Rapids is one of the more pervasive questions management of the club faces year-to-year. For the time being, the Rapids remain one of three teams (San Jose and Houston being the other, though Chivas USA’s could be without one in 2014) that does not have a jersey sponsor, and remains the only team never to have one.

This is a bad thing, somehow reflective of the Rapids’ profile in their home market and their inability to keep up with the rest of MLS.

Fans want a sponsorship not just for the money it will bring their club (which they can then imagine reinvested in the on-field product), but because a shirt sponsor is a status symbol.

That’s worth considering with the response from some DC United fans. It’s not even about comparing sponsors in some “power ranking” where Xbox trumps Barbasol and Quaker Oats rates higher than Advocare or LifeVantage. It’s that it’s not Volkswagen, a major brand that chose to step away.

If it’s about prestige, DC United took another hit to their psyche by being in the market for a shirt sponsor to begin with.

The rest of MLS is passing DC by, in more ways than on-field performance, and having a quality, well-known, prestigious brand like the German carmaker on the front of the jersey at least gave United a sense of importance. RFK might be a dump, especially when compared to PPL Park and BBVA Compass Stadium, but at least United could attract a company like VW to put their emblem on the front of DC United’s iconic shirts. The logo even looked good on the uniform, a concern that gets more than its fair share of attention after all.

That’s what makes the response to a different shirt sponsor so soccer-specific. The day one backlash was against a company willing to spend money on their team.

Perhaps a defense contractor doesn’t sit well with the more politically minded among DC’s faithful (though in that town, United’s fan base might be the most politically minded in MLS but not all of them will think of Leidos in a negative light. Locally based and committed to the club for multiple years during an unsettled period for the franchise? There’s a lot to like.

Again, it bears repeating. Any shirt sponsor is better than no sponsor. This is soccer. Shirt sponsors don’t just represent money coming in, they serve as symbols to the outside world that someone with many advertising options sees value in slapping their logo on the shirt of the local soccer team. In MLS, that’s no small thing.