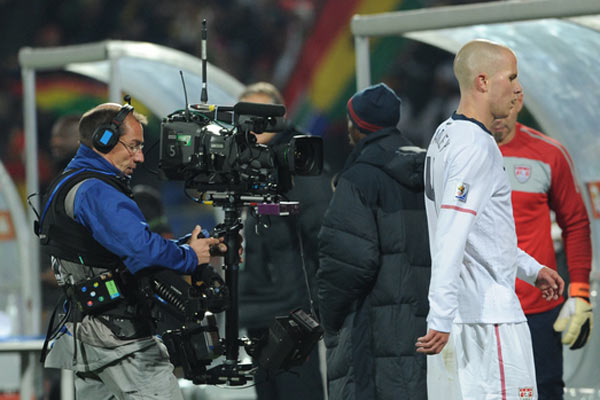 First off, this isn’t hockey so if anybody tells you to watch where the ball is going, ignore them. Televised soccer is different from live soccer for a very obvious reason, namely, that someone else is choosing what you’re seeing.

The cameras are usually only interested in the ball, so you’ll be following the ball and whatever the camera operators happen to catch. You’ll see a lot of the intricacies on replay. That’s not to say this is a bad thing, just different. Plus, there’s ample opportunity to miss that sort of thing at a live game without the benefit of multiple angles.

We’re going to assume you know the truly basic, things like goal kicks, throw-ins, and corners, but there are other equally obvious things that could use explaining. FIFA actually does this for you in their own Q&A for the Laws of the Game, and we’ll highlight some of the common questions for the television viewer.

Out of Bounds: Something overlooked by a lot of people is that the ball controls out of bounds, not the player. The ball has to cross the line completely, which is why you’ll sometimes see a ball that looks like it’s out of bounds get played right off the line.

Offside: A lot is made over the complexity of the offside rule, but it’s really not that hard. A player must be level with the last two defenders to play the ball in the attacking half of the field. That’s it, and most of the time the only confusion is to the position of the players and the ball. There are other rules that can cause a play to be offside, but that’s the equivalent of knowing all the rules for gridiron football. It’s not a waste of time, but it also isn’t crucial for enjoying the game.

Fouls: More to the point, level of fouls. As you probably already know, a foul is normally called when a player tackles another player before making contact with the ball. If the ball is touched first, it’s a fair tackle. Cards are shown depending on several criteria, but the easiest way to think about it is in terms if severity. A harsh illegal tackle will likely result in a card, as will numerous fouls by the same player. Not all tackles are fouls, and not all fouls result in a card.

These happen after the ball leaves the playing field or play is stopped for a foul. If the ball leaves the field, where it crosses the line determines the kind of set play. If the ball crosses a sideline, it’s a throw-in for the team that didn’t last touch the ball. If it crosses the end line (including going over the top of the goal frame), it depends on who last touched the ball. If it was a defensive player, it’s a corner kick to the attacking team. If it was an attacking player, it’s a goal kick to the other team.

For fouls, you’ll usually see the defending players form a wall, literally standing shoulder to shoulder to deflect the kick. The closer it is to the goal, the more players forming the wall. The wall blocks the obvious route to goal or a teammate, so the free kick taker wants to angle the ball to go over the top or bend around the side of the wall.

Keeper: Fairly obvious, the player in the different looking shirt allowed to use their hands but only within the thirty-yard box. A keeper shirt is different from both teams so the referee, and everyone else, can spot the keeper in a crowd of players.

Defender: A defender can play several roles, even pushing up to score on occasion, but basically they stay between the keeper and the other team’s forwards. Their primary job is to stop the attack.

Midfielder: Midfielders also play both ways, joining in the defense and attack and just like you would expect, working the ball through the middle of the field. This is reflected in the various names for midfielders such as defensive midfielder, attacking midfielder, and central midfielder. Because of the offside rule we learned earlier, most plays develop out of the midfield. It would be a different game if this wasn’t the case.

Forward: Also known as the striker, and the primary offense for a team. You probably already know that the forward’s job is to stay forward, using both feet and their head to try to score.

Many in the game believe too much attention is placed on strategy for it to make sense for the average viewer.  We’ve all listened as announcers disagreed on basic setups, where players are positioned, and what the coach has in mind.  We’ll go over the standard formations, but since you won’t be seeing the entire field for most of the game, this isn’t crucial.

4-4-2 – This is the standard formation for most clubs and national teams, balanced between attack and defense.

4-3-3 – This is the old Brazilian standard, pushing an extra forward into the attack and maximizing wing play.

3-5-2 – Familiar to MLS fans, with the wing players moved to the midfield.

5-3-2 – What the 4-4-2 has a tendency to turn into under pressure. This formation is usually the equivalent of admitting you’re overmatched and need defensive cover.

5-4-1 – Another defensive minded scheme, unless you’re side is playing with one great striker working alone.

4-5-1 – More attack oriented, usually partnering a standout isolated striker with wingers coming out of the midfield. During the run of play, this looks a lot like a 3-5-2.

This can be a lot of fun, figuring out what the coach has in mind and what a substitution does to a strategy. If everything is going well and a club is in the lead, you might see a coach take off a tired striker. You might also see the exact same thing if the club is behind, but who takes the striker’s place is what’s important. A few goals up, and you can put in an extra midfielder. A few goals down, and you’re liable to try anything.

What’s considered standard depends on the country, with an Italian club likely to take the field with a sweeper defender playing between the keeper and three other defenders. In England, you’re likely to see a flat back four of defenders in a standard 4-4-2. In Major League Soccer, several teams have adopted the 3-5-2 system Bob Bradley used with the Chicago Fire.

That’s basically it. The more you get into the game, the more you’ll pick up. You don’t have to know every rule to enjoy watching soccer on television, just enough to understand what you’re seeing.

TV producers, and ESPN in particular, have mastered the close-up shot of players and coaches on the bench. Often, you can see the coaches screaming instructions to the players on the field. See if you can figure out what they are saying or what they are signaling to the player. Reading a coach’s lips can be easy when they are screaming.

It’s a tired cliché but sometimes it is good to turn down the announcers and turn on the radio. If you can find live radio of the game you are watching, the announcers on the radio will give much more detail and explanation of what is going on the field. TV announcers will often let their color commentators do a majority of the talking and interpretation, but feel free to do your own by either watching with the sound down or with the radio sound instead of the TV.

TiVo and digital video recorders have added an element to watching sports on TV that has even the most lazy of couch potatoes using the instant replay and record functions. It never hurts to record a game so you can go back at commercials or halftime and watch the play over at live speed. Slow motion replays while effective will never allow you to see the speed a decision was made to do something on the field. If the game is great, keep it forever, and if it is 0-0 draw, just record over it.