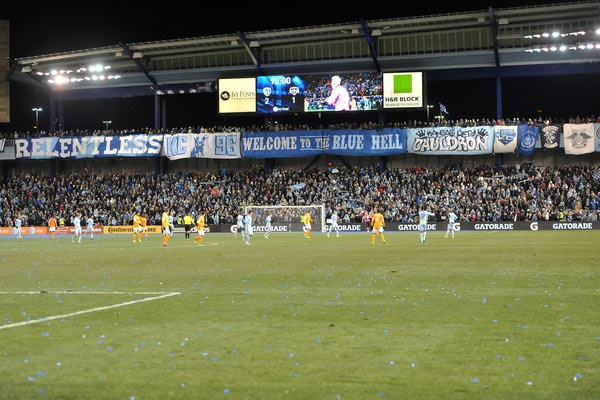 By Jason Davis – WASHINGTON, DC (Feb 19, 2014) US Soccer Players – Rejoice, fans of the future, the new line of MLS stadium fashion is starting to drop across the American soccer scene. A few teasing images of the possible D.C. United home in Southwest Washington heralds a new season of soccer-specific stadium renderings. D.C. is first, but in the very near future we might see concepts from MLS expansion teams Orlando City and New York FC. Then there’s David Beckham’s project in Miami.

The stadium rendering is the graphic representation of American soccer’s fascination with an unlimited future. Stadium renderings are always stylized, the colors are always vivid, the architecture is always perfectly tied to the surrounding. The stands are always full, casting the mind to a day when the building exists and the atmosphere is brilliant. The field is immaculate, the views and lighting most optimal. The stadium rendering is a dream come to life, with the added bonus that it represents a thing that will (presumably) one day exist.

Stadium renderings are always perfect. In that way, they lie, because no building built for soccer can quite match the manipulated reality of 2D images carefully presented by architects. We are mostly aware of the lie, and yet we allow our imaginations to run wild, pulled along by the visual cues spoon-fed to us because they feed our fascination.

The long, long, wait for a D.C. United stadium heightens the phenomenon. Even fans of United’s most ardent rivals are anxious to see Washington’s team in a stadium of their own (and out of RFK), and not just because it will be more comfortable when they make the trip down I-95. United is a legacy MLS club who deserve their own building, especially in light of the advancements in soccer stadiums around the country and the purgatory spent in an MLS 1.0 venue. The center of focus has shifted since United owned the league in the late 90s, but the original MLS dynasty is still something of a marker for overall growth: Getting United into their own stadium is one of the few remaining hurdles remaining in a bid to lay down unshakable roots for MLS.

United’s renderings are glorious on that front. The firm chosen to design the speculative project is Populous, the same group behind Sporting Park. That stadium is the current gold standard among MLS buildings because of its enclosed design and modern amenities. As small soccer stadiums go, its difficult to beat Sporting Park.

Forgetting differences in total spend and whatever design choices D.C. United makes, the thought of a Sporting Park-like building inside the boundaries of Washington makes for pretty heady fantasies. Because the club has always played in dingy digs, we don’t really know what D.C. United’s ceiling might be. In the same way that Sporting Kansas City exploded from the carcass of the old Kansas City Wizards and surprised with their success, and teams like the Red Bulls and Dynamo shed unbecoming skins by moving into appropriate new venues, United figures to join the atmospheric elite of Major League Soccer with a stadium on the Anacostia.

At least, that’s what our imaginations tell us. United, in a building meant for them, playing in front of 20,000 fans. It’s the way it was always meant to be and always should have been.

United’s stadium deal isn’t done yet. No shovel has hit the ground, and in fact a significant port of the land necessary to start the project remains in limbo. The arrival of renderings is little more than tease, then. We abide by the tease because it’s at least a small step forward from a time when a D.C. United stadium was nothing more than a dream, and because it represents a tangible belief on the club’s part that a design is necessary—a commissioned design implies progress, and eventually, construction.

At some point not too long from now, both David Beckham’s Miami project and NYCFC will release renderings of their stadium plans.

In Miami, artist’s depictions of a downtown soccer stadium will preview the return of MLS to Miami and revive the possibilities left unrealized when the Fusion ceased operations. For anyone that remembers Major League Soccer’s first foray into South Florida, flashy images of a stadium somewhere in Miami filled with imaginary people will not doubt be thrilling.

In New York, renderings of a stadium somewhere within the borders of America’s largest city – a holy grail for MLS these last few years – with bring with it its own sort of muted validation. A stadium, for soccer, in New York City! Just processing that possibility through fancy renderings is fun.

Stadiums renderings present a world where everything goes soccer’s way. Red tape doesn’t exist in the world of stadium renderings. Local politicians don’t push back. There are no construction delays. Cost overruns that require changes to the design at the last minute don’t happen. Ticket sales aren’t a problem, which means the place is always packed.

Stadium renderings represent an idealized version of soccer’s vast American potential. Sometimes that potential is realized, like with Sporting Park, and sometimes the images never transition from concept to reality. We take the good with the bad, because we want to believe that all things are possible.

Rejoice then, that it’s stadium rendering time again. These days might not last forever.