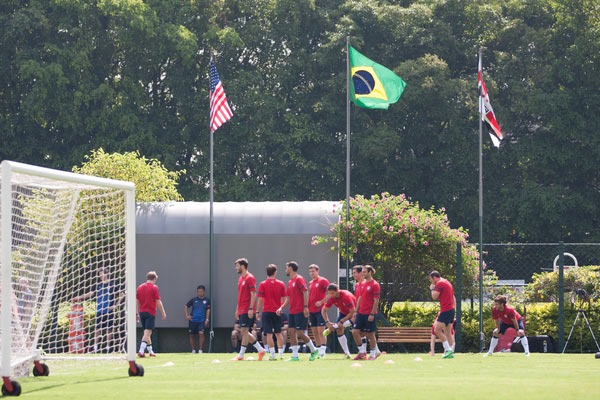 By Charles Boehm – WASHINGTON, DC (Feb 11, 2014) US Soccer Players – By now, every USMNT fan knows the arduous road awaiting their boys during the World Cup in Brazil this summer. Three of the most fearsome opponents imaginable, to be battled in three of the hottest, most distant venues of the far-flung tournament. While it’s often said that “the devil is in the details,” in this case, the Yanks might actually find deliverance there instead.

With the margins between success and failure likely to be razor-thin, the manner in which the U.S. Soccer Federation is addressing the complex logistics behind the team’s group-stage assignments against Ghana, Portugal and Germany – which entail the maximum in-country travel mileage that the World Cup draw in December could possibly have handed down – looks more important than ever.

It’s an area where US Soccer and the USMNT have ample experience. Myriad CONCACAF qualifying cycles and a jet setting foreign legion accustomed to trans-Atlantic trips for international duty have created a culture of long-haul travel that might even turn the USMNT’s nightmarish draw into an advantage, however modest, against their illustrious adversaries.

The team trekked 3,154 miles to face five opponents in 18 days in May and June 2012, shuttling from Jacksonville, Fla. to Washington, DC to Toronto to Tampa to Guatemala City. A year later, it was Cleveland to DC to Kingston, Jamaica to Seattle to Salt Lake City during the Hexagonal round of qualifying, covering about 6,000 miles in less than three weeks. Their triumphant 2013 Gold Cup campaign ran through San Diego, Portland, Ore., Salt Lake again, Hartford, Conn., Baltimore, Dallas/Ft. Worth and Chicago, some 6,625 miles in midsummer.

“You can’t take away the challenges, but you can say that the US team has faced these challenges before,” said one person with knowledge of the situation, noting the value of last month’s “dry run” training camp in Sao Paulo. “At least our players know what to expect.”

So with that in mind, here’s a look at the outlines of the demanding travel plan, with as much detail as U.S. Soccer’s traditional preference for privacy allows at the moment. (These dates are approximations and are yet to be officially confirmed.)

Reports suggest that the USMNT will fly south from the United States to their base camp in Sao Paulo, Brazil on or around Sunday, June 8, after a three-game sendoff series which reports say will conclude with a June 7 friendly in Jacksonville.

If reliable outlets like ESPN and Sports Illustrated are to be believed, they will have already racked up serious mileage, thanks to a training camp and friendly in Northern California followed by another match at Red Bull Arena in Harrison, N.J. That’s about 3,500 miles’ worth of travel even before they’ve left US airspace.

Coach Jurgen Klinsmann and his staff picked Sao Paulo FC’s Barra Funda training complex as their home base before the draw, motivated in large part by the facility’s dazzling amenities – “a spectacular setup,” said one source – a five-star hotel nearby and the fear that other World Cup participants might beat them to it.

USSF officials sound unwilling to reconsider even though their secure digs in Sao Paulo sit far south of their three group-stage venues, and in a different climate zone.

About a week later, the USMNT squad will embark on the first leg of their 8,866 miles of travel across Brazil when they jet to the northeastern city of Natal, a three-and-a-half-hour flight into tropical conditions ahead of the pivotal opening match vs. Ghana on June 16. Like all team travel during the tournament, this will be a charter flight arranged by FIFA.

Known as “Cidade das Dunas” (The City of Dunes), Natal is a tourist-friendly beach city which will be warm and muggy but mild – analogous to Miami – though seasonal rains could affect the clash with the Black Stars. It is known as one of the nation’s safest metropolises and has a long history with Norteamericanos, having played host to an important US military base during World War II.

In general, US officials sound quite confident about the security arrangements in Brazil, which are made in conjunction with the Brazilian government, the local organizing committee and the US State Department. Despite the reports of terrorist plots hanging over the Winter Olympics, the USA’s expedition to Brazil is not expected to feature anything like the tense, post-9/11 precautions taken a t the 2002 World Cup and players will be encouraged to soak up the cultural occasion unfolding around them.

With six days until their next game, the USMNT will fly back to Sao Paulo after the match.

JUNE 20: INTO THE AMAZON

True to form, Klinsmann & co. are optimistic about the match assignment that supposedly every World Cup team dreaded. A long trip to the heart of the world’s most famous jungle, home to heat, humidity and more exotic dangers like malaria.

“He was pleasantly surprised, based on all the discussions people have had so far,” said one U.S. Soccer official in reference to the exploratory visit Klinsmann and other staff members made to the remote city last month. “Manaus isn’t the boogieman that everyone’s made it out to be.”

Long seen as a frontier backwater, Manaus is thrilled to be hosting such a prestigious event and will be eager to roll out the red carpet for visiting teams and their fans. And in a small but potentially vital development, the kickoff time for the USMNT’s match with Portugal on June 22 has been pushed back to 6 p.m. local time, giving the equatorial sun two more hours to fade towards the horizon.

However, a range of “unknown unknowns” await the Yanks after the four-hour flight from Sao Paulo. How will they respond to anti-malarial medications, which can produce different side effects in different bodies? Will wet-season rainforest conditions – and perhaps the strains of chasing global icon Cristiano Ronaldo – drain energy levels ahead of the short turnaround to their third and final Group G match just four days later?

JUNE 24: DUELING DEUTSCHLAND IN THE DELTA

Germany await in Recife, another breezy seaside locale where weather may well be a major factor. June is the wettest month of the year in the city at the confluence of the Beberibe and Capibaribe rivers, seeing more than 15 inches of rain on average.

Die Mannschaft are probably the most arduous adversary of the group, and the US will have barely arrived back at Barra Funda after the Portugal game before it’s time to fly off to the Northeast again ahead of that June 26 clash. That would seem to lend logic to the idea of flying directly from Manaus to Recife, known as a “venue hop,” thereby saving some 1,200 miles and upwards of three hours’ flight time.

The Federation may yet indeed file such a request with the organizing committee. Insiders emphasize that it presents “substantial logistical challenges,” thanks in large part to FIFA’s interconnected matrix of travel and lodging arrangements for the entire tournament. For example, the USMNT’s hotels in both cities quite likely have other teams staying in them both before and after their currently scheduled reservations.

“There are a lot of moving parts to try to make something like that happen,” said one source. “It changes the blueprint.”

Should the Yanks defy the doubters and navigate through these treacherous waters into the knockout rounds, they’ll face another swift transition of either four or five days until their Round of 16 match.

Interestingly, the schedule may be friendlier if they advance as the second-placed team rather than the group winner – the latter play in Porto Alegre in the far south on June 30, while the second seed will move to Salvador for a match the following day. Both games will feature the survivors from Group H, which contains Belgium, Algeria, Russia and South Korea.

That may look like a very distant prospect compared to more immediate tasks in Brazil. Yet the ones booking the reservations are doing their part to make that dream as accessible as possible.

“Overall we’re in a really good place,” explained a USSF official. “We’ve seen what there is, we’ve made the connections, we’re talking about solutions to some of the things we would try and improve. So the situation is already in a good place and we’ve put ourselves in a position to make it better.”