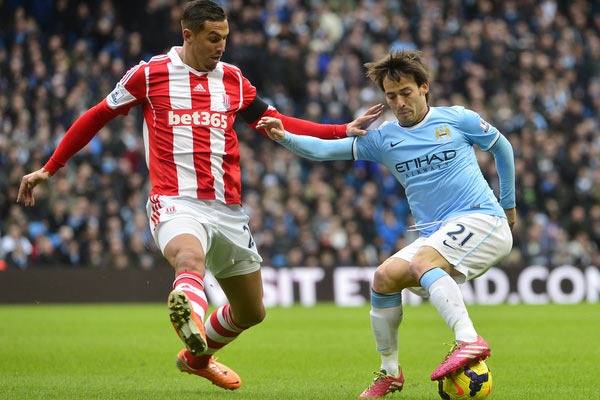 By Jason Davis – WASHINGTON, DC (Feb 25, 2014) US Soccer Players – On Tuesday, after defending Premier League champion Manchester United fell to Olympiacos in the away leg of a UEFA Champions League Round of 16 game, former Manchester United star and noted gruff individual Roy Keane questioned the common perception that the Premier League is the best soccer league in the world.

“I think we’ve been brainwashed by the [idea that] the Premier League is the best league in the world,” Keane said. “Nonsense. It’s the best brand, but we’ve seen over the last few weeks with a lot of the English teams struggling that these teams have fallen behind the top teams in Europe, and United in particular…”

Keane is pointing directly to the results on the field. Between the best teams Europe’s respective best leagues have to offer (last year’s best teams, that is—an important thing to keep in mind as it relates to United) the Premier League isn’t quite as good as it is made out to be.

It’s Keane’s opinion, and he’s welcome to it, using whatever support he deems important. You can’t really prove him wrong, because the very nature of determining which league is the “best” is subjective. Only one English club looks likely to advance past this round of the Champions League, a reality that says… something, but most definitely not everything.

Reaching a consensus on what constitutes “best” is problematic.

Still, if we’re going to try to dissect Keane’s more pointed comment – that the Premier League is the “best brand” but not the “best league” – perhaps it’s worth determining whether “brand” is all that distinct from “league.”

The modern game is awash with glitz, glamor, and cash, all if it bearing down on a sport with working class roots and local ties. What once was a purely pastoral past time that turned only on neighborhood rivalry and countrywide prominence now cares more for international competition and the national pride it fosters.

Oddly, in an open market for players that has the number of foreign nationals in the Premier League at historic highs, the performance of English teams – featuring many international players and several international managers – is still a referendum on England’s version of soccer.

The number of internationals is a direct effect of the money flowing through the Premier League table. The money is massive, and continues to grow, because no league in the world is as successful at marketing their product. The Premier League and its biggest clubs are worldwide phenomena that attract legions of fans from Phnom Penh to Kansas City, sucking up revenue from sources inaccessible by similarly powerful teams in the big leagues of mainland Europe.

Part of the Premier League’s success is simply down to their early recognition that TV was the key to a lucrative future, hence the creation of the Premier League from the old First Division in the first place. Another large part of that success success is rooted in English soccer’s historical significance and the prominence of English as the de facto language of one large market (the U.S.) and the lingua franca of the rest of the world. Even where English isn’t predominant, the Premier League’s high visibility, and the cultural hegemony that filtered through in English, puts it above leagues who might otherwise challenge for interest.

Keane distinguishes between “brand” and “league”. We could just as easily argue that the size of the brand begets the quality of the league.

If the Premier League is spending more money top to bottom – forgiving for the vagaries of talent identification – doesn’t that make it the best league? In at least one sense, the Premier League outpaces every one of the leagues with which it competes for players. At the top of the tables, and therefore in the Champions League, English clubs find themselves outdone by a handful of teams sprinkled across several competitions.

Rather than an indication that the Premier League isn’t the “best”, perhaps that’s simply evidence that talent in England distributes more evenly than anywhere else in Europe. That creates the knock-on effect that it’s more difficult for English teams to be successful on multiple fronts.

For some, a more even league of clubs playing at an identifiably high level might even measure up to “best.” Though it’s still a subjective assessment, more parity means league games in England are more tightly contested affairs week-in, week-out, than those in Germany or Spain. Down the table, the quality falls off much more gradually than in leagues where just a few teams can afford to cast a wide net for talent across the globe.

The Premier League’s “brand” links directly to its product. There’s no getting around that. England’s top flight might benefit from its marketing power, skewing perception of the quality of its best teams. But any argument that it’s not the best rely on a limited set of examples rather than a full appreciation of top-to-bottom quality.

Clubs that spend the most don’t always win titles within a single season. However, the league that spends across the board is “the best” because any other means of measurement is as equally imperfect.

As a throw-in, ‘best” can also include the atmosphere of the games, the presentation for television, and the entertainment value of the play. The Premier League ranks at or near the top in all of those categories.

Keane is right, if only because there are many ways to interpret what exactly “best” means in a global soccer context. He’s certainly right that England’s best teams are trailing the top teams from Spain and Germany. Two or three teams does not make a “league” however. That’s true no matter how much importance is place on the Champions League as a marker of world soccer prominence.