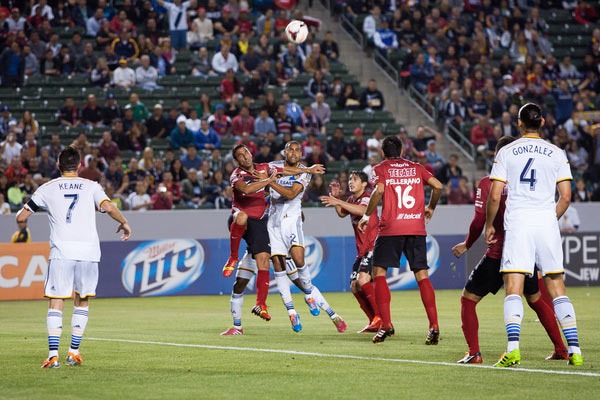 By Jason Davis – WASHINGTON, DC (Mar 14, 2014) US Soccer Players – When are two wins and a draw not quite good enough for MLS? When the wins are by a single goal each in the first leg of the CONCACAF Champions League quarterfinals against three teams from Mexico.

Over the course of two days, the San Jose Earthquakes, Sporting Kansas City, and the LA Galaxy took their respective turns at holding serve against Mexican teams. The results were good, with qualifiers.

The San Jose Earthquakes scored while the referee was drawing in his breath to blow the final whistle to earn a 1-1 draw with Toluca. Sporting Kansas City outplayed Cruz Azul, the first place team in Liga MX, in a 1-0 win. The LA Galaxy took advantage of a defensive breakdown by Tijuana to put the ball in the net in their own 1-0 win.

At various times during these three latest examples of the USA-Mexico rivalry that has now seeped deep into the club game, the MLS side looked to be the equal or better than their Mexican opponent. Sure, Toluca says they didn’t scout the Quakes. Cruz Azul might not have spent too much time looking at Sporting KC game table either. Whatever the reasons for such even contests, the ML S performances are encouraging.

Yet none of the three outcomes will give anyone on the American side of the equation much confidence. It certainly shouldn’t convince anybody that this is the tournament MLS breaks its interminable hex against teams from Mexico.

That’s because San Jose has a mountain to climb in the return leg, and that’s not just a reference to Toluca’s elevation of a gasp-inducing 8,750 feet. The Earthquakes missed chance after chance on Tuesday night before finally zeroing in on Alan Gordon’s head in the 90th + 4. That put a positive spin on a performance that was otherwise wasteful, and therefore, disappointing.

Every bit of credit due San Jose comes with a caveat that nullifies it. Their strong second-half didn’t cancel out a very poor first-half. One mistake undoes strong defending for the majority of the game. The number of good chances that went begging undermines the fighting spirit that helped salvage the draw. If Mark Watson’s team didn’t have to work so hard to overcome so much, they might be working with a lead next week in Mexico.

Sporting KC and the La Galaxy didn’t press their advantage at home either, despite both securing 1-0 wins. A one-goal aggregate lead is the slimmest possible margin they can take with them on their own trips to Mexico. Considering the terrible history of American teams when traveling to Mexico in this competition, surely both of them need a bigger buffer.

LA’s showdown with Tijuana at the StubHub Center carried several subplots that added a distinct edge to the play. Xolos is the club that poached Galaxy-trained players. Xolos is the current club of former Galaxy man Herculez Gomez. Xolos is the club making inroads into Southern California’s soccer-rich markets, in San Diego but also perhaps within the Mexican-American communities of Los Angeles.

LA did enough to win on Wednesday, but little more. Goalkeeper Jaime Penedo was as responsible as anyone was for the Galaxy escaping with a victory. It’s never a good sign when a team relies so much on spectacular saves to preserve a shutout. Robbie Keane wasn’t sharp, which somehow worked to his advantage when he dumbly bumped the ball into Samuel’s path for the Galaxy goal. Landon Donovan was fantastic, everywhere but in front of goal or with the final pass on several breakaway opportunities. Tijuana threatened repeatedly. LA’s defender scrambling to good effect to keep them out, but at the same time presenting an image of desperation in the manner they did it.

The rust of the offseason still clings to Bruce Arena’s team. That’s hardly his fault, but it does have a large role to play in whether this Galaxy team is good enough, right now, to advance past a Mexican side deep into their league campaign.

To double down on the elevation issues for MLS teams, Sporting’s visit to Cruz Azul will present the same problems for the reigning MLS Cup champions as Toluca will for San Jose.

Of the three MLS remaining in the Champions League, it was Kansas City that most looked capable of truly outplaying their opponent to a larger lead. That’s no small thing considering it was first-place Cruz Azul in town to face them in the quarterfinals. Sporting KC did no better than LA in the end. A lone goal, admittedly well-scored by Kevin Ellis, is all that they have to show for their good performance.

Underlying all of the doubt trailing the MLS clubs to Mexico is the not just the historical failure of American teams there, but the effort to earn respect in a region dominated by Mexican teams. Until MLS clubs can prove themselves the equal of Mexican sides over the course of two legs, Mexican players, fans, and managers will continue to regard this competition, and the American teams competing in it, as little more than curiosities to consider only when the schedule requires.

After San Jose came back to draw his team, Toluca manager Jose Cardozo said the Quakes “weren’t attacking”, but instead were “just shooting at the goal.” Heading into the contest, the Mexican press reported Toluca hadn’t scouted San Jose, so confident they were that the series would be easy to win.

In Kansas City, where Cruz Azul acknowledged they had been outplayed, there was praise of the damning kind. The Cementeros hadn’t given much thought to Sporting KC prior to the trip either. The MLS champions’ high-pressure style was a surprise.

MLS might be closer than ever to clawing its way to the good estimation of Mexican soccer. That ultimately requires winning when it matters to prompt more than a few isolated, and often backhanded, compliments.

When are two wins and a draw not quite good enough? When we can’t believe they mean anything has changed.