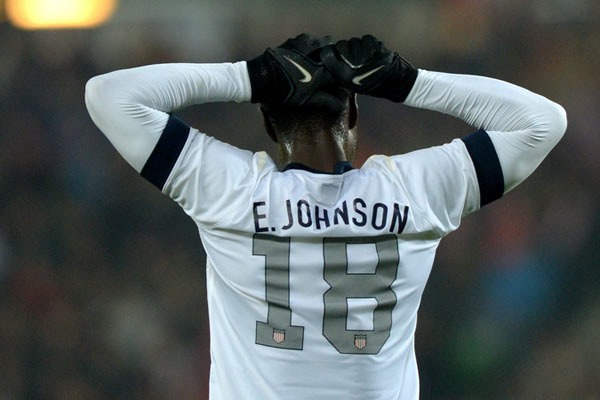 By Charles Boehm – WASHINGTON, DC (Mar 7, 2014) US Soccer Players – Eddie Johnson hadn’t yet picked out a place to live in his new city when he spoke to the media at DC United’s season-kickoff event last month, but the USMNT forward had a few ideas about what aspects of this sprawling metropolis of nearly six million inhabitants he wanted to avoid.

“I’m a single guy, I might want to try to live in the city — it’s easier to get to training, it’s not too far,” he said with a quick smile. “I’m not a guy that likes traffic.”

Johnson has encountered ample roadblocks of many kinds in a professional playing career that has, amazingly enough, now stretched to 14 years. So it’s understandable that he’s hoping to minimize detours and delays as he prepares to make his regular-season debut for his eighth club. Time ticks down to what he and USMNT fans hope will be his best summer yet.

From that perspective, he’ll be thrilled that his newest employers have moved swiftly to complete a new, dramatically larger contract for him before United kick off their 18th year of existence against the Columbus Crew at RFK Stadium on Saturday evening.

Johnson’s new deal makes him a Designated Player on wages that are, according to media reports, somewhere around quadruple the salary that made him MLS’s best bargain. Over the past two seasons, he scored 24 regular-season goals for the Seattle Sounders at an impressive rate of about one strike every other game.

The man known to most of his colleagues as EJ is turning the page from a productive, but controversial stint in Seattle. Raving adoration from the league’s biggest fan base suddenly soured last year as the team’s fortunes faded into a tailspin on the field and in the locker room.

His contribution to that clubhouse’s chemistry has become an explosive topic amid a swirling blizzard of rumors, counter-rumors, and anecdotes. Johnson went in search of the respect and reward his performances deserved, and he had to leave the Sounders to find it. He turned the page on yet another chapter full of highs and lows that reinforces the sense that his rags-to-riches-and-back-again-twice story is one of the most unique in modern US soccer history.

“If I look back on my career, I’ve had a chance to play with a lot of different coaches and different coaches,” Johnson told USSoccerPlayers.com last month. “A lot of people that know me that can speak on my behalf, they know I’m the most down-to-earth, most outgoing and caring person. But at the same time I’m very emotional. I grew up one of three in a inner city where you had to always take up for yourself, defend yourself.

“I was the middle of three and I always had to look after my older sister and my younger brother. That’s how I’ve always been. I’ve always had to fight for everything in my life and fight for myself and stand up for myself. So sometimes when I’m on the field, my emotions get misperceived. The ones that sit down, talk to me, have dinner with me, get to know me, they’ll get a different side of Eddie Johnson.”

The Bunnell, Fla. native, who turns 30 later this month, doesn’t look all that much older than the baby-faced teen who burst onto the scene as a free-scoring teenage youth international more than a decade ago. But he nonetheless must bear some soberingly adult duties that will be familiar to many of his middle-aged fans. His ex-wife and their two children remain in Seattle, necessitating a cross-continental shared custody arrangement that is thankfully made simpler by their amicable relationship.

Just one luminary among a glittering arsenal of stars in Seattle, EJ is now unquestionably the focal point at his new club. He’s the most dangerous weapon at DC United coach Ben Olsen’s disposal and, if fan excitement and jersey sales are any indication, their most popular player before he’s even played a game that counts.

“They say as a striker you have to have a short memory — miss an opportunity on goal, it’s the next opportunity,” said Johnson. “I enjoyed my two years in Seattle. Like every player, there’s always different chapters and different opportunities in your life. Like I keep reiterating in the press, I’m delighted to be not only in DC, but to work with a manager that knows me and understands me, and that I played with, who brought me here.”

After a nightmarish 2013 season that set historic records for offensive futility, United are desperate not just to improve dramatically with their revamped roster, but to do so quickly and attractively. Mindful of the club’s precarious position in the long quest for their own downtown stadium and the fiscal salvation it offers, veteran players emphasize the importance of a fast start this year to win over the doubters. They also need to draw fans back to RFK both in body and spirit.

That would also happen to suit Johnson’s individual goals perfectly. He appears to be one of USMNT coach Jurgen Klinsmann’s most trusted strikers. Yet, the next few months remain pivotal in terms of reaching optimum health, fitness and scoring form. Like the rest of Klinsmann’s player pool, Johnson is under the microscope, and will be until the team’s plane departs for Brazil in early June.

“I’m pretty sure it’s a very important time of the year for US Soccer right now and I’m sure Jurgen will be calling and checking up on all the players, talking to coaches and keeping an eye to make sure they’re all sharp,” Johnson said.

“I know that the World Cup, none of that would be possible if I wasn’t doing the business here in DC and we’re not getting results week in and week out. So my main focus is winning games here in DC, scoring goals and being a good teammate. The rest of the stuff will take care of itself.”

He knows the risks of this juncture more keenly than most. Johnson was one of the last cuts from Bob Bradley’s 2010 squad, making the pre-tournament roster but missing out on a ticket to South Africa.

“I know if I’m doing all the right things and we get off to a good start to the season and we’re winning games here and we’re scoring goals, I think I’m putting myself in a pretty good position to go on that plane,” he said. “Because I don’t want that feeling that I had in 2010.”