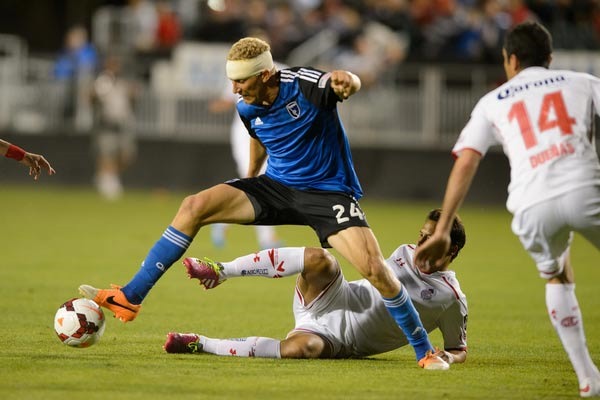 If this feels familiar, it should. The postmortem assessment of another futile MLS effort to win the CONCACAF Champions League is an annual rite. Last year, it didn’t come until after the semifinal round, when the Seattle Sounders and LA Galaxy fell, but the scourge on the other side was the same. Mexican teams are nearly always the teams that put MLS sides to the sword in the knockout rounds of the CONCACAF Champions League.

Credit the San Jose Earthquakes for pulling the “plucky” card and giving everything they had in a loss to Toluca on penalty kicks. The Earthquakes didn’t display the best of what MLS soccer had to offer – a function of their style and several injury absences – but they pushed Mexico’s second best team at the moment to the brink. That the Earthquakes almost managed it despite heading to Toluca without a lead (as did the other two MLS teams left in the tourney) makes it all the more impressive.

The less said about the LA Galaxy and Sporting Kansas City, the better. Neither was ready to play at the level of Tijuana or Cruz Azul, respectively. Both Mexican teams exploited deficient defending to punish their opponents. Sporting wasn’t at full strength. That should affect our assessment of the thrashing they took (5-1). It also highlights the problems MLS clubs face when situations require relying on players outside of their first eleven.

At this point, all of the truly valid reasons MLS struggles to overcome Mexican clubs in the tournament have devolved into whimpering excuses.

The schedule puts MLS at a massive disadvantage against Mexican outfits deep into their season, with all the rhythm and team continuity differences it implies. MLS teams aren’t even warmed up yet!

Mexican teams vastly out-spend MLS teams, leading to a disparity not only in top talent, but in the depth of the squads. MLS clubs can’t compete on two fronts at the same time and put out good enough teams to win.

Not good enough. Do better.

Parity and Major League Soccer’s salary cap make it difficult for clubs to keep their teams together and to be at their best over the course of the tournament. Case in point: San Jose exited the tournament after they secured qualification via winning the 2012 Supporters Shield.

The truth of whether or not MLS should have broken through against Mexico in this tournament is hard to pin down, exactly because those very real handicaps have become so trite. Those factors don’t explain why both LA and Sporting conceded in their first five minutes of their matches in Mexico. They don’t explain why so many MLS teams can’t make the simple play to prevent a goal. They don’t explain why every time it comes down to one big moment, the American side is the one that fails.

Shout out to Shea Salinas. Jon Busch certainly wants a few of those Toluca penalties back.

The excuses matter, but the amount to which they matter fades each time a tournament end without an MLS champion. At this point, the MLS community is tired of watching teams not just lose, but lose in a manner that shames MLS as a whole.

Picking apart the reasons the “all for one” attitude pervades isn’t necessary, but it’s very possible the League outgrows the phenomenon before an MLS team lifts the trophy and books their ticket to the Club World Cup. Why should Sounders fans or Union fans or Portland fans care about this set of teams going down in the quarterfinals?

An honest assessment of where MLS stands in relation to Liga MX should consider that even one American side coming out on top in a battle with a Mexican club would mean little, as the Sounders run proved last year. As an outward sign of progress it stands out, but until MLS sides are regularly advancing past Liga MX teams, it’s impossible to put the two leagues on anything approaching the same level.

Despite strong attendance, an influx of new teams, increasing relevance in American sports culture, and a general rosy outlook for the future, nothing can compare to the tangible proof of MLS ascendance that would come from beating better teams in a richer league. That’s why the excuses don’t fly anymore. MLS fans are impatient for validation. Validation requires wins.

Again, the focus turns to MLS headquarters and commissioner Don Garber. It was the commissioner that raised the Champions League to official “priority” level and announced rule changes to benefit clubs representing MLS in the competition.

Maybe the sample size is too small to know if those aids are working, but it’s not as though MLS can wait 10 years to find out. Every year that passes without an MLS as the last club standing heightens the pressure to figure it out a solution.

Never mind that the league’s real goals should simply be to improve, period, with any international titles coming as a side effect of that growth. The people want to know, not just believe, that the soccer is getting better.

Will this latest round of failure spur MLS to create even more new rules to help their teams compete in the Champions League? Those concessions always seemed like a hedge anyway, a way for MLS to push for international silverware and the world stage it provides without addressing the basic issues holding its teams back.

Those being the schedule, a problem that is likely intractable and the salary cap, something the owners seem loathe to address in a meaningful way.

Fortunately, there’s a CBA negotiation coming up. If there was ever a time to give clubs a real chance to make themselves good enough to go to Mexico and win, that is it. Either MLS puts it money where its mouth is with the CONCACAF Champions League, or we’ll see you again next year to go through the motions of yet another postmortem.