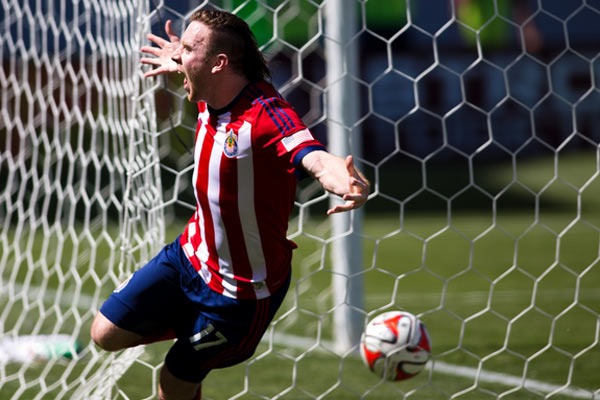 By Jason Davis – WASHINGTON, DC (Mar 11, 2014) US Soccer Players – The total number of goals scored on the opening weekend of MLS wasn’t all that notable, in the end. The eight games on the schedule produced 26 total goals, a number just two more than the same weekend in 2013.

One fewer game than in 2013 and two more goals managed to push the goals-per-game average above 3, which may or may not be a magic number resulting in an increase in overall fan enjoyment. Goals aren’t everything, but they are the thing most often cited as representative of a soccer game’s entertainment value.

What was notable in week one was the number of hidings handed out, the teams on the receiving end, and what they might mean for the teams doing the handing. Two teams, Houston and Vancouver, scored four times on Saturday and did it against playoff teams from last season. While Columbus’s 3-0 win over DC United can’t be a surprise based on last year’s standings, the evolution of the Crew under new head coach Gregg Berhalter will have tactics types mulling the implications and pondering the future possibilities.

First, Houston, who cowed everyone picking the Revolution to outperform their 2012 campaign. The Dynamo barely needed more than a minute to break through on New England and didn’t let up for the balance of the game.

Will Bruin scored Houston’s opener, the first of his two goals on the day, and put MLS on notice that his terrible end to 2013 was more blip than trend. If Bruin is going to resemble the player we saw Saturday though the bulk of this season, the Dynamo are much more dangerous than previously thought. The Dynamo manage to lurk under the radar year after year, in part because they avoid the offseason arms race. After Saturday’s performance, and the possibilities of a Bruin, Giles Barnes, Brad Davis, Boniek Garcia-led attack showing themselves for everyone to see, they might not be lurking much longer.

What Vancouver did to the Red Bulls would be much more troubling in New York if it wasn’t for the absences of Thierry Henry and Jamison Olave. That neither played gives Mike Petke’s club something of an excuse for the loss out west, though it’s dangerous to assume the Red Bulls will simply switch back to their Supporter’s Shield-winning form when the pair returns. Reliance on a few game-changing players isn’t unique across MLS clubs, but Olave and Henry’s ages and potential for injury give New York’s season a feeling of riding on a knife’s edge.

How about those Whitecaps under new head coach Carl Robinson? Vancouver looked the part, creating chances of multiple types while shutting down Cahill and the Red Bulls attack.

The Whitecaps received strong contributions from both old hands (Kenny Miller, Nigel Reo-Coker) and new arrivals (Sebastian Fernandez, Matias Laba, Pedro Morales) that bodes well for the rest of the season. Let’s not jump to any conclusions, but if the Whitecaps are anywhere near that good through the balance of 2014 (and can avoid injury, a problem last season), the Western Conference gets even tougher than we imagined. It was already pretty tough.

Speaking of tough, that word doesn’t do what’s happening in Washington justice. A roster remodel brought DC United a host of slightly-past-their-prime MLS veterans, the most frugal means to turning the storied club back into a competitive outfit.

2014 in DC isn’t really about making the playoffs or reaching for another league trophy. It’s about restoring some respect to the name and burying 2013 as deep in the past as is possible. The early returns are not encouraging, especially in light of other clubs improving across the conference. If the plan is to hoof the ball up to Eddie Johnson and hope he gets his head on a few, it will be a long year at RFK.

Despite the small sample size, Crew fans have to be encouraged that Jairo Arrieta got on the score sheet and that Federico Higuain was so influential playing deeper than he did in 2013. The quality of the opposition notwithstanding, Columbus showed off a fluid brand of soccer, complete with an aggressive attacking stance that belies Gregg Berhalter’s defensive history. That makes sense given the club’s personnel.

Yes, Columbus also started last season with a three goal win on the road against a poor team (Chivas USA), but that hardly means they’re destined for the same fate in 2014 as they suffered last year. Or so Crew fans will hope.

Why not toss in a couple of five-goal games? FC Dallas beat Montreal 3-2 and it was the same score for Chivas USA over Chicago in a game of second-half goals. MLS opening weekend certainly delivered the scoring. Not so much more than last year that it was uncharacteristic of the first matches of the season, but just enough to tease us with the possibilities for more than a few MLS teams.

No team will keep up a four, three, or (more than likely) two-goal pace for the course of the season. Over 34 games, through a summer fraught with international absences, heat waves and exhausting travel, MLS clubs will find scoring tougher to come by than in week one. In 2012, the New York Red Bulls led MLS with 58 goals for a 1.77 goals per game average, while the league-wide average was 2.6.

In other words, don’t expect the goal-happy trend to keep up, though that doesn’t mean we won’t see the occasional 4- and 5-goal team performance. With opening weekend now over and the cobwebs are shaken off, they’ll probably just pop up in a more random pattern.

Better to spread out all that entertainment than use it all up in one weekend.