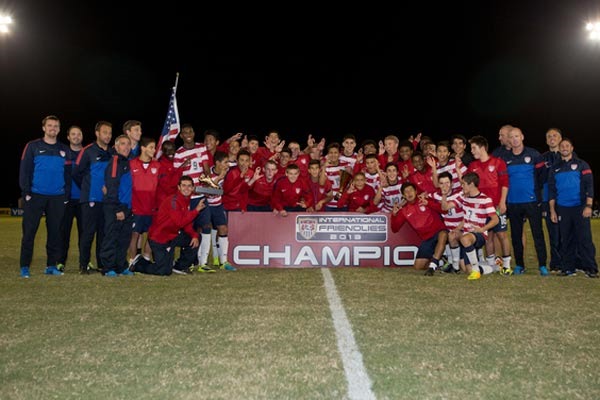 By Charles Boehm – WASHINGTON, DC (Mar 21, 2014) US Soccer Players – A little over two years ago, the US Soccer Federation mandated that all players in its Development Academy, give up participation in high school soccer. The Developmental Academy is the elite nationwide league that seeks to identify and groom the country’s best youth players. US Soccer announced the move as part of a shift to a 10-month calendar more similar to those seen at the world’s best professional clubs.

The idea was, and is, to remove the distractions, injury risks, bad habits, and uneven coaching so often found at the high school level. Instead, US Soccer demanded full commitment to the pursuit of a genuinely world-class standard of play from elite high school age players. More (and better) training, fewer (and better) games and thus better players.

“Moving to a 10-month season means players can focus on training together three or four times per week and play meaningful games on the weekend nearly year-round,” explained the Federation at the time. “Fewer games and an extended season will allow for the addition of a substantial number of extra training sessions, which are the primary vehicle for player development.”

Tested and debated for months beforehand, the decision was a controversial one. “It goes against the entire American way of life,” said one high school coach in California that sent shock waves across the wider soccer landscape. Despite the unwavering conviction of Development Academy officials, the wider argument about the policy’s usefulness rumbles on.

The New York Times ran an in-depth feature called “Forced to Choose in Soccer: Club or Community” grimly explaining the pain and sacrifice caused by the rule. The Los Angeles Times has a chorus of pieces critical of the situation, led by high school sports reporter Eric Sondheimer. A panel discussion on the topic at the NSCAA Convention in January “turned into a gripe session about the Academy,” reported journalist and youth coach Beau Dure.

The US Soccer Federation, understandably focused on catching up with the global elite at international level, made the top-down structural changes it felt were long overdue. In doing so, the sport’s national governing body cast aside America’s deep-rooted cultural tradition of scholastic-based sports for a pro-centric pipeline. At least for the 4,000 or so high school-age and 2,000 middle school-age kids across the country taking part in the Developmental Academy.

For many, that’s placing the future lives of 99 percent of the Academy in thrall to the needs of the 1 percent or so who will eventually turn pro.

“US Soccer, they came a little bit hard and they set a fine line,” retired US National Team great John Harkes told reporters at a US Soccer Foundation event last year. “I think that was kind of hard. Because geographically speaking, we’re such a vast country, and some programs at high schools are actually very good and competitive. And there’s also that sense of pride and that kind of development that a kid gets by playing for his school team.

“My son [Ian] played high school his senior year, but he was also in D.C. United’s academy, and he’s going to Wake Forest and he’s playing well. So you’re looking at it and you’re saying, There’s a little bit of everything for everybody, at different levels, right? Different platforms.”

Bring this issue up with US Soccer director of scouting and U-14 National Team coach Tony Lepore, one of the DA’s main architects, and you’ll hear a well-honed explanation of why the DA’s philosophy made high school soccer an inevitable casualty. The weariness in the delivery suggests the Federation’s decision-makers moved on from the topic long ago.

“There’s still a lot of discussion around it,” he told me last Fall. “In terms of our rationale, we feel like we are full-speed ahead and in many cases it’s surprising that there’s a lot of people still talking about it. It doesn’t feel new to us anymore. And because of the support, because of what we’ve been able to provide for the top-level players, it certainly feels right. It’s unquestionable for us, the value.”

Federation and academy coaches like Lepore express frustration with the uneven quality of high school coaching, scheduling, and infrastructure. Different states play their seasons at different times of year and communication between club and high school coaches is often poor or nonexistent.

As the Developmental Academy matured under the Federation’s stringent oversight, it became easier for the program to ratchet up the commitment required from its participants. There appears to be little desire to reverse that course. Lepore emphasizes that it’s not for everyone. Only those who don’t want to be just anyone.

“We respect that everyone’s got a personal choice and we expect that in many cases, the choice is very, very easy,” said Lepore. “For many players this was a no-brainer. And for others, it can be a difficult choice. For us, we feel like we’ve moved full-speed ahead.”

Earlier this month I spent three days at the Boys Weekend of the Jefferson Cup, an enormous youth tournament that draws more than 400 teams and clubs from across the US and Canada to Richmond, Va. every March. The event generally offers high-quality play. At the Under-15 level and older, matches are often keenly watched by throngs of college coaches on the prowl for potential recruits.

Those scouts bring folding camp chairs and sit in an appointed area along the touchlines, on the opposite site of the fields from parents and players’ family members. Even though what happens in those games can easily make or break the kids’ college soccer dreams, that’s usually the extent of the audience. A few dozen spectators at best.

Most of those taking part in this tourney are outside the Development Academy’s exclusive network of member clubs and showcase events, which have siphoned off a good chunk — but by no means all — the top youth talent. So most of these kids play high school soccer, and many college coaches welcome it.

“I definitely go to the high school games as well,” said Scott Baker, who coaches at Rowan University in New Jersey. “The club games are good to watch kids play, but if you see these same kids play for their high school, they look very different, because they’re competing. So they compete with pride, more like they would in a college setting. There’s more of the environment, where there might be a thousand people at a big high school game, at night, with all their fans… all those kind of things. That’s what a college atmosphere looks like.”

Most college coaches would welcome Developmental Academy players into their programs. They also recognize that many of those players are in high demand and will be siphoned off to pro clubs or top-tier Division I colleges. Even so, no one is convinced that the Federation has actually secured all of the USA’s best in Developmental Academy competition.

“There’s some kids in certain areas where there’s just not an academy team, so you can normally find really top-caliber players that are equivalent to the academy kids in those areas – and in some cases, choose not to play,” said Niagara University (N.Y.) coach Eric Barnes. “They want to play high school or they play other sports, especially with our goalkeepers. We have goalkeepers that play either baseball or basketball or some other sport… and they can’t play academy, because they can’t do anything besides that.

“From the US Soccer and Academy standpoint, it seems like they’re trying to develop more professional standards and have everything to develop for the national team and for the pro leagues,” he added. “It makes sense in that regard. For the other 99 percent of the kids, it doesn’t always make a ton of sense, because they lose that high school experience. There’s always going to be a give and take no matter what you pick.”

The sheer size and complexity of the US youth scene means that players will slip through the cracks in the DA system yet still go on to build meaningful pro – and even international – careers. Until US youth national teams consistently compete for top honors in FIFA tournaments and/or deliver elite prospects to the senior team with more regularity than they do now, the most controversial policy of US Soccer’s brainchild will continue to be met with skepticism. The wider public is not quite ready to give up on the ancient paradigm of the well-rounded student-athlete.

“The high school side of things, it’s your one chance in your whole life where you get to be a star,” said Barnes. “You might be number 10 or 11 on the academy roster when they pull from a three- or four-hour radius. But that’s your one chance in your life to be a superstar and you’re going to have all your friends out there watching you and it’s an experience that you’ll never get again. Unless you just happen to be the best player at your college.”