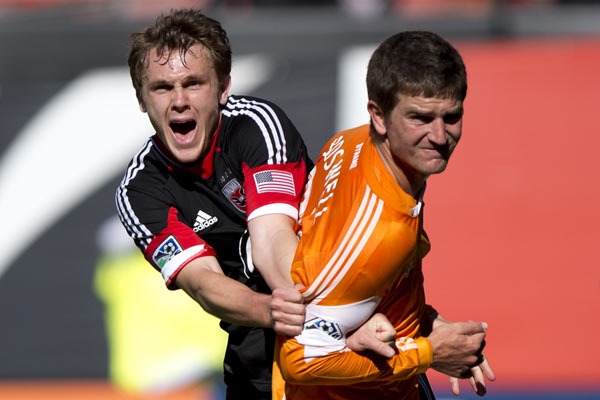 By J Hutcherson – WASHINGTON, DC (Mar 5, 2014) US Soccer Players – During Tuesday’s MLS press conference, commissioner Don Garber once again addressed promotion and relegation as it applies to North American soccer. It wasn’t by choice. Garber got the question – among many others – from fans and media in a steady mix of expansion, labor, and business talking points. Promotion and relegation didn’t get a lot of time, something that shouldn’t surprise most MLS fans.

MLS positions itself as a league that embraces soccer traditions when advantageous. As well they should. For a young league, the pragmatic approach is normally the best one. MLS has shown time and again that they will retreat from troublesome choices and try something else. We don’t have a countdown clock, time outs, or a shootout clock in 2014. We also don’t have promotion and relegation, a single table, or clubs able to compete to sign the same player. Those hallmarks of soccer everywhere else don’t fit the current MLS story line.

For promotion and relegation, there are good reasons why that shouldn’t change. Investor/operators buy into the single-entity model because securities are in place. They’re not going to have to compete against fellow MLS teams for every player, driving up prices and potentially introducing an internal MLS system of transfer fees. They’re also not going to see their investment devalued by having to spend time in a lower division.

Hey, fair enough. Promotion and relegation isn’t an American professional sports system. Here’ it’s closed leagues, playoffs, and expansion. There, it’s dropping teams out of the topflight at the end of every season. Bridging that gap in what it means to be a professional sports league isn’t subtle. What group of investor/operators is going to want to entertain the possibility of getting the boot out of the top level?

This is the difference between inheriting a tradition and building something new. Start up any of the major European leagues right now from scratch, and see who comes up with that great idea of promotion and relegation. For that matter, does anybody really believe that a breakaway European Super League is going to allow the style of promotion and relegation we currently see across the European top divisions?

You wouldn’t either, and that’s MLS’s standard response. It’s pragmatic and it’s simple. But is it the right answer? MLS could adopt a two-tiered system completely under their investor/operators’ control, after all. There’s not the pressure to embrace the existing pyramid or copy the standard European model step-by-step.

What that move allows should be obvious for a league in consistent expansion mode. More slots, more teams, and a way to distinguish levels of competition across the board. It’s not baseball suddenly deciding to send the Houston Astros to AAA level. There’s already a Houston Astros affiliate playing in AAA. It’s more about seeing the limits of the other North American expansion models and reacting pragmatically.

What the value of the investor/operator model holds dear in the current setup is the ability to turn things around in a single season. Chivas USA and DC United playing a league down in 2014 robs them of potential. They can only do so much playing in a second division. Win promotion and then start all over again two seasons removed from a bad finish. That’s a timeframe problem easily overlooked when playing up the positives of promotion and relegation.

The positives are greater competition down the table, something MLS tried addressing through the SuperLiga and other ways of giving the middle tier of teams games that count more than playing out the schedule and hoping for better luck in the playoffs or next season.

For those convinced promotion and relegation needs to happen, a lot of rests on the futility of too many teams playing for next to nothing. MLS’s extended playoffs catches less teams with each expansion. Pick a North American sport, and you’ll find teams suffering from lack of interest due to season after season of missing the playoffs entirely or bowing out after the first round. Progress means reward in North American pro sports. Identity begins to erode and shift into something altogether different the longer a team fails to contend.

What MLS investor/operator has shown that it’s possible to build value in an underperforming team? The value is building for the eventual turnaround. Soccer-specificity needs to go with results on the field. Designated players are worth it because of results on the field. What the playoffs do is skew those results, allowing teams an open invitation to reinterpret success and failure as it suits them.

Relegation certainly puts a hard line right above failure. There’s no downplaying what that means. It’s not finishing in last place or near the bottom of the table. It’s dropping out of a league entirely. There’s no precedent for that in North American professional sports. There are obvious downsides, but there’s also the potential for something unique in a crowded sports marketplace. That alone should make it a little less easy for MLS executives to dismiss out of hand.