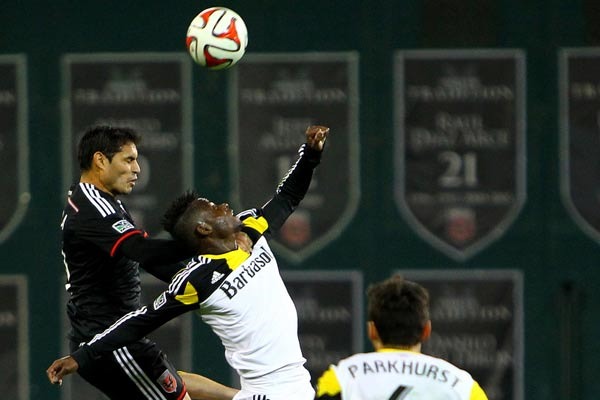 By Jason Davis – WASHINGTON, DC (Mar 26, 2014) US Soccer Players – Picking a bandwagon is all about gut. Remember that while considering the market for MLS bandwagon teams in 2014.

There are several candidates, even outside of the usual suspects and popular favorites. A number of teams that missed the playoffs last year are on the shortlist and they’re already picking up steam. The time to get on a bandwagon is early. The longer the ride, the sweeter the finish if – or when – the bandwagon arrives at the ultimate destination.

The bandwagon isn’t for everyone. It’s not for fans who have an MLS team. Well, unless the bandwagon team is not a rival in any sense and you can somehow justify the ride under the pretense of appreciating good play.

Strangely enough, it’s not for people looking to hop from one good team to another in the hope of celebrating a championship. That’s basking in reflected glory, not the real thing. It’s also front running – glory hunting to our English friends – related, but fundamentally different from bandwagon-jumping.

Picking a bandwagon is much more about identifying a team with championship quality as early as possible, preferably before the masses wake up to how good they might be, and marking the progress towards success along the way.

Switching bandwagons midway through the season? Nope, not allowed. If a bandwagon crashes, it crashes. Accept that it was the wrong bandwagon and try again next year. Degree of difficulty certainly counts. The less crowded the bandwagon is when you jump on, the more satisfying the journey. Better to pick a team under the radar than one getting all the hype.

To that point, TFC is going to need a bigger bandwagon. Something for the overflow.

FC Dallas is definitely among this year’s early candidates for bandwagon of choice, and has the benefit of a lower profile than most. As long as they stay relatively healthy and get some protection against more physical teams, Oscar Pareja’s side will be fun to watch. Fabian Castillo alone might be worth throwing some excitement behind the team from north Texas. Blas Perez is a stone cold poacher when he’s on his game. Mauro Diaz is garnering the type of early praise that makes players MVP candidates down the line.

On Saturday, FC Dallas hosts Portland. The Timbers bring their own pre-season bandwagon with them (the pre-season bandwagon is built on last year’s success and is usually a less thrilling ride because teams with pre-season bandwagons are more rightly called “favorites”), a bandwagon that is slow to build momentum. Still, Pareja and his team can make a statement about their credentials in the West if they can handle the Timbers and their host of high-octane attacking players.

The Crew has a case for their own bandwagon. Columbus has played twice so far in 2014, with emphatic wins in both games. Gregg Berhalter’s club is deep with the type of players worth watching because they’re capable of breaking open a game at any moment. Bernardo Anor’s brace lifted the Crew past Philadelphia last Saturday, unveiling another weapon to add to the arsenal of Higuain, Arrieta and Oduro. Through two matches, Columbus has had no problem creating chances. They get their own opportunity to prove they’re good enough to jump to the front of the line in the “unexpected” category of bandwagon teams if they grab points away to Seattle this weekend.

Backing a club led by a head coach in his first MLS season is risky, but Columbus is good bandwagon value. Plus, there’s plenty of legroom, at least for the moment.

Houston is an interesting case. The Dynamo are always pretty good, at least in the regular season. In the playoffs, they’re even better. That makes tagging them as “underappreciated” problematic. It makes identifying their bandwagon as a worthwhile ride nearly impossible. There’s not enough risk to make Houston exciting (because they always make the playoffs and they always make noise once they get there), but they are playing above the level expected of them coming into the new season.

There’s not nearly as much credit to be earned should Houston win something this season than there might be in picking Columbus, FC Dallas, or a host of other “unfancied” sides, but the Dynamo don’t have the spotlight of Portland, New York, LA, or some of the other obvious MLS Cup winner picks.

Dom Kinnear’s side started 2014 with a bang, dropping four goals on New England (by the way, the Revs bandwagon is near empty at the moment) and gutting out a 1-0 win over Montreal. Will Bruin is scoring, a fantastic sign, and there’s no doubting the quality assist men in Houston’s lineup.

The Dynamo go on the road for the first time in 2014 this weekend when they play the Whitecaps in Vancouver. We’ll have just a little more reason to eyeball that Houston bandwagon if they emerge from Canada with three more points to add to their so-far perfect start. There’s even a possibility of drilling down on a Will Bruin bandwagon specifically, though the player bandwagon doesn’t require nearly the same commitment as the team version.

It’s easy to jump on board with the biggest spending teams, the teams with recent trophy success, or the teams that appeared just on the verge of taking the next step before the campaign began. Sleek and shiny, those bandwagons gather supporters because they’re exactly that.

Don’t be fooled by the bells and whistles. Sure, one of those seemingly well-oiled machines might make it all the way to the finish line and make a hood ornament out of the MLS Cup. Ok, but if they do, there won’t be much surprise.

What fun is that?