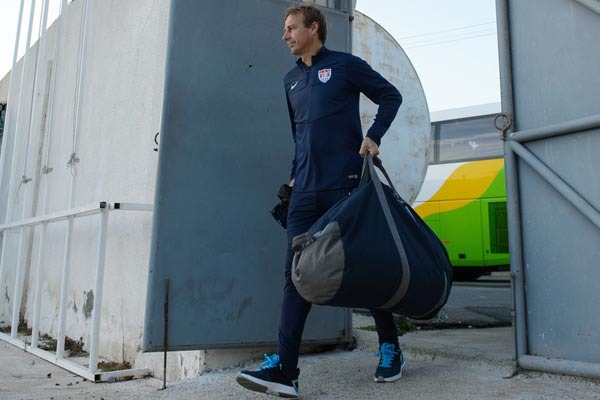 By Charles Boehm – WASHINGTON, DC (Mar 31, 2014) US Soccer Players – USMNT coach Jurgen Klinsmann gets another opportunity to assess his World Cup roster options against Mexico on Wednesday night in Arizona. Klinsmann’s time is running short as he decides on his roster for the2014 World Cup. It’s an out of window friendly, but any game against Mexico is high stakes for the USMNT. Even more so when historically the March friendly has been the make or break point for some World Cup hopefuls.

The World Cup roster deadlines loom for Klinsmann and the USMNT players. On  May 13, the squad officially becomes 30. A second cut on June 2 reduces that to the final 23-man World Cup roster.

“It is definitely a game we need to see where our MLS and Mexican-based players are,” Klinsmann said in an interview last week with ussoccer.com. “They need to prove now that they badly, badly want to go to Brazil. Therefore, it’s going to be a tense couple of days and it should be a little bit of a test, you know, for what they can expect going into the World Cup preparations. Obviously against Mexico, that’s the best stage they can have.”

When Klinsmann spoke, there were two Liga MX-based players on the roster for Wednesday’s friendly. On Monday, Puebla removed DaMarcus Beasley and Michael Orozco. Whether or not it was a bit of gamesmanship is unclear. Now, Klinsmann has an MLS-based squad plus Bayern Munich’s Julian Green.

World Cup cycles past have shown that the final USMNT game before the final roster decisions – and the final weeks leading up to the tournament in general – can often spring surprises both pleasant and disastrous.

Based on the precedents set since 1998, at least three to six of the players who see match action at the University of Phoenix Stadium on Wednesday will miss out on the World Cup. Whether due to coach’s decision or one of the miserably-timed injuries that have ruined more than one sure ticket to the planet’s biggest showcase, count on change.

In 1998 Greg Vanney, Mike Sorber and, David Wagner all started a 2-2 friendly draw with Paraguay in San Diego on March 14. They missed the cut just a few weeks later when Steve Sampson revealed his squad for France 98.

Four years later the unlucky Vanney missed out again on a World Cup when he was sprained his knee in a “Road to Korea match. Vanney was a late injury replacement for Chris Armas. Similar misfortune would befall their replacement. Steve Cherundolo missed the tournament after a training session injury just before that unforgettable 3-2 defeat of Portugal in the 2002 World Cup curtain raiser.

Brian Maisonneuve, Richard Mulrooney, and Ante Razov started in the 1-0 victory over Mexico in Denver on April 3, but missed the final cut. They perhaps had the misfortune of competing with younger players like Landon Donovan and DaMarcus Beasley who would turn out to be USMNT icons, though relative pups at the time.

Multiple coaches have shown a tendency to favor experience, which appeared to be a decisive factor when Ben Olsen made a late run onto the 2006 roster. Olsen eventually even saw playing time in Germany. That also helped scotch the chances for Steve Ralston and Pat Noonan, MLS vets of similar stature. All three started in the 1-1 draw with Jamaica in Cary, N.C. on April 11, as did Tony Meola, who would fall just short of attending his fourth World Cup.

While injuries are a constant and unpredictable factor, the competition for places appears to be a growing risk.

Alejandro Bedoya, Heath Pearce, Sacha Kljestan, Robbie Rogers, and Eddie Johnson earned caps in a 4-2 loss to the Czech Republic on May 25, 2010. None took part in the festivities in South Africa, Johnson losing out at the final hurdle as he fought off injuries. Brian Ching might’ve been the biggest snub, a World Cup veteran who’d played a pivotal role in much of that cycle.

Thanks to outside factors like the CONCACAF Champions League semifinal schedule and the absence of all but one European-based Yank, Klinsmann’s latest roster does not encompass all of this year’s known “bubble” cases. Yet even the most conservative estimates suggest that only a dozen or so of those heading to Phoenix have a place on the plane to Brazil.

Their final audition will take place against a reinvigorated rival, with upwards of 50,000 loud fans of both Yank and El Tri persuasions in attendance. Mexico has called in a similar group of contenders. Mexico as a whole is on an upswing that should make them an infinitely tougher proposition than they were in the dispiriting final days of former manager José Manuel “Chepo” de la Torre’s reign.

History shows that the hunt for those last few roster spots carries on right up until the last moment. It tends to be a gripping spectacle. It’s also a heartless, merciless one.