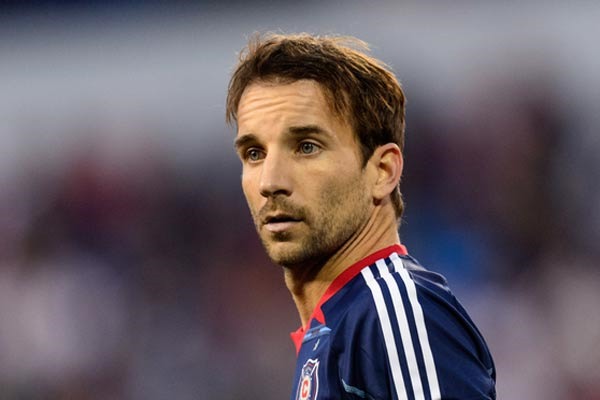 By Jason Davis – WASHINGTON, DC (Mar 19, 2014) US Soccer Players – The second weekend of MLS games brought a host of interesting moments and noteworthy results. San Jose earned another draw thanks to a late goal. Questionable penalties helped Colorado and Chicago win a point on the road. Chivas USA nearly held out with 10 men for 80 minutes before conceding to Vancouver. Toronto FC displayed their new weapons for nearly 40,000 fans in a win over Seattle. So much of the discussion coming out of the round is, and should be, about the players on the field.

For two teams, absences were also part of the story.

In Portland, the Fire (aided by that questionable penalty) scraped out a draw with the Timbers. The result was good, especially in light of last week’s loss to Chivas USA in LA, but one player was conspicuously missing from the Chicago lineup. One who might have helped Frank Yallop’s team to a win had he been leading the line, or taking some of the handful of chances the Fire created over the course of 90 minutes.

We’re speaking, of course, of reigning MLS MVP Mike Magee. Chicago’s native son missed the Timbers game after previously missing out on the opener against Chivas USA. Though the whys of the situation are less important than the impact Magee’s absence has on the Fire’s ability to score goals, it’s worth examining just what is going on between Magee, the Fire, and new head coach Yallop.

Prior to the Chivas match, Yallop ruled Magee out of the lineup due to a lingering hamstring strain. Seemingly straightforward, that explanation was nonetheless at odds with the events of the previous week. Magee dressed but did not play against Chivas USA, telling reporters ahead of the game he was ready to go. Yallop clearly thought otherwise and did not call on his top goal scorer.

All of this comes in the aftermath of Magee’s late arrival to Fire camp ahead of the season. Numerous outlets reported it as a holdout, though Magee claimed otherwise. Magee certainly wouldn’t be the first athlete, or MLS player for that matter, to try and leverage a career year into a new contract. Whatever the truth, the series of events leading to Magee’s absence in the first two games of the new year makes it impossible to take any involved at face value. Nearly every conceivable possibility – Magee is actually hurt, Yallop is punishing Magee, Magee is still being difficult in a bid for a new deal – is believable.

Chicago opens their home schedule on Saturday against New York. If Magee’s absence isn’t already a distraction, a home date against last year’s Supporters’ Shield winners without the MVP will make it one.

At least Chicago earned a point without their best player in the lineup. New England can’t say the same.

Jose Goncalves was excellent in 2013. Good enough, in fact, that he walked away with the Defender of the Year Award at the close of the campaign. Like Magee, Goncalves might have seen that recognition as leverage to push for a better deal in Foxborough. T the Revolution has the right to hold him to his option under MLS rules. The club also has some obligation to do what it can to keep such an instrumental part of their lineup happy.

Right now, Goncalves is far from happy. Ives Galarcep reported last week that Revolution head coach Jay Heaps gave the defender two choices: get over the hurt feelings of his contract situation, or not play. Goncalves obviously chose the latter. That’s bad news for New England in both the short and long terms. New England has shown no movement towards revising Goncalves’ pay, so if he is willing to sit out matches now, it’s hard to imagine a change of heart is in the immediate offing.

In the meantime, second year defender Andrew Farrell finds himself in a central position from his previous right back spot. Darius Barnes moves into the hole vacated by Farrell. On paper, it’s a serviceable solution to the Goncalves problem. In practical application, the discombobulated backline conceded five goals in two games, both of them losses.

At least the Revs know where they stand with their star player and the player isn’t mincing words on why he’s a no-show. In that regard, they possess certainty the Fire lack. On the other hand, Goncalves’ situation looks more intractable from the outside than whatever is preventing Magee from appearing in Chicago colors.

If we’re putting bets on who makes their 2014 debut first, the smart money is on Magee. That doesn’t say anything at all about which team needs their M.I.A. star more. There’s a decent argument that it’s New England that is suffering most while their award winner is on the sidelines. Chicago needs goals, but New England needs continuity from the back. Cliche or not, there’s truth to the axiom that teams – especially teams like New England, with their skill and desire to keep the ball on the ground – build from the back.

There’s also a “fish or cut bait” feeling around the Goncalves situation that doesn’t apply in Magee’s case. New England needs to make a decision, lest Goncalves’ absence submarine a large swath of their campaign. Magee is destined to show up in the Fire lineup eventually, with little lingering effect.

To put it another way, Chicago can paper over their goal-scoring cracks with a few good games from Amarikwa or Anongono. New England’s missing center back causes a ripple effect throughout the team that unsettles more than one Defender of the Year.

Nevertheless, it’s in the best interest of both teams to figure things out with their star performers from a year ago, and to do it as quickly as possible.