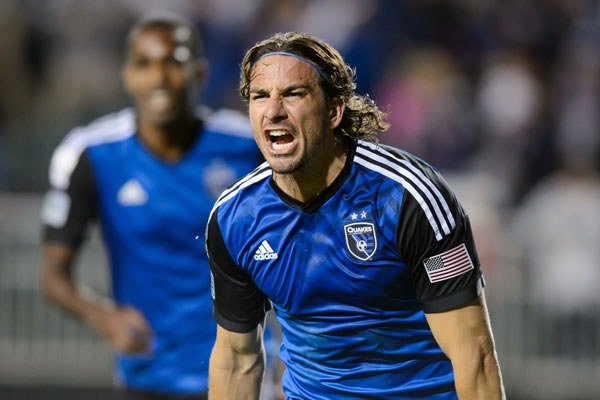 The San Jose Earthquakes needed a stoppage time goal to draw 1-1 with Toluca in the opening leg of their CONCACAF Champions League quarterfinal series at Buck Shaw Stadium. Raul Nava opened the scoring for Toluca in the 67th minute in a game where the San Jose Earthquakes outshot Toluca 20 to 10 putting 12 of those on goal to Toluca’s 3. San Jose finally beat Toluca goalkeeper Alfredo Talavera when Alan Gordon equalized in the 5th minute of stoppage time.

“I made a play on a great ball by Shea (Salinas), Gordon said. “I kept my eye on the ball and as it got closer I knew I had a chance to win it in the air and put it on frame. They are a tough team to break down and so many other guys should have scored. I was just lucky to get enough on the ball for the goal.”

San Jose were the 8th seed in the knockout stage of the 2013-14 CONCACAF Champions League with Toluca 1st. This is one of three quarterfinal series where MLS teams play Liga MX teams.

The two-leg aggregate-goal series concludes in Toluca next Wednesday at Estadio Nemesio Diez. Toluca’s home stadium holds 27,000 fans and hosted games in the 1970 and 1986 World Cups. The CONCACAF Champions League uses the away goals tiebreaker for a series tied at the end of regulation of the second-leg. The away goals tiebreaker doesn’t apply once a series goes to extra time. If needed, knockout round series in the CONCACAF Champions League are decided by penalties.

San Jose didn’t play in Week one of the 2014 MLS season. Their first game is this Saturday against Real Salt Lake at Buck Shaw Stadium. The Earthquakes are coming off a 6th-place finish in the Western Conference, missing the playoffs.