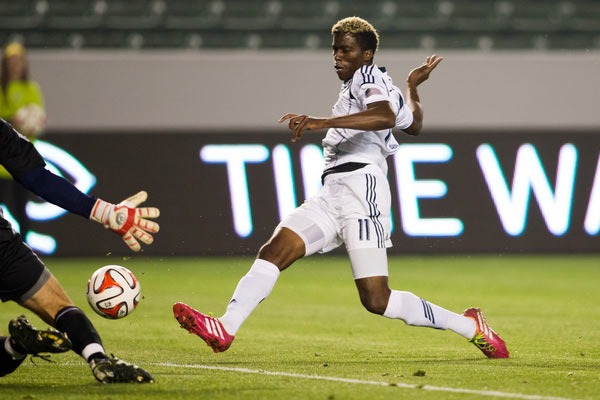 By Jason Davis – WASHINGTON, DC (Mar 5, 2014) US Soccer Players – Picking a group of MLS players due for a breakout season shouldn’t be all that difficult. MLS has many players of obvious talent who figure to play significant roles for their teams in 2014. They’re exactly the type to fill a list of MLS breakout players to watch.

Still, there’s some science to this process. How much previous success precludes a player from having a breakout season? Do these players have to be young? Do they have to start the season as something less than stars? What exactly is a “breakout season” anyway? If a player has a breakout season and no one notices, did it still happen?

Okay, enough already. Nothing about picking four MLS players as breakout candidates in 2014 rises to the level of philosophical discussion. The season starts tomorrow. There’s no time for nonsense.

Zardes possesses all of the athletic ability to be among the best players in MLS and to get there before we’re really aware it’s happening. 2013 was a feeling-out year for the Galaxy homegrown player. After a season adjusting to a wide role in Bruce Arena’s setup, he should be ready to make a more consistent impact in 2014. The Galaxy added two forwards (Rob Friend, Samuel) and a winger (Stefan Ishizaki), creating competition for minutes. Zardes should benefit directly in terms of playing time by the absence of Landon Donovan for international duty.

Watching Zardes is like watching potential in action. Gangly, but explosive and capable of something spectacular every time he touches the ball. If the forward-turned-winger can harness his ability while better understanding his responsibilities, he might even make Galaxy fans forget about Mike Magee. Zardes exhibited glimpses of immense talent while scoring four goals and providing four assists. For our purposes, a breakout year means doubling those numbers.

There’s a reason USMNT head coach Jurgen Klinsmann called up 25-year-old Red Bulls midfielder Eric Alexander for the team’s January camp. It wasn’t just because of his winning personality. Alexander’s skill set – strong dribbler, good in combination, willingness to run at defenders – sometimes makes it difficult for coaches to find a place for him in the starting lineup. It also means he’s a unique type of MLS talent that could make waves if given the chance. To that point, Alexander’s four years in MLS have already included stops with four different teams.

However, New York seems to agree with Alexander, and Red Bulls coach Mike Petke seems to see his value. Alexander made a career-high 30 starts in 2013, though he did bounce around several midfield positions while doing so. 2014 could very well be our first chance to see Alexander get enough responsibility and consistent time for the Indiana product to show the rest of MLS what he can really do. It doesn’t hurt that he’ll have Dax McCarty alongside of to carry the water. There’s also Tim Cahill and Thierry Henry in front of him to both finish his work and provide him with some opportunities of his own.

Trapp is just one of a host of young, smart American midfielders coming up in MLS. A homegrown signing who played college soccer at Akron, Trapp’s savvy and strong passing make him a candidate for the next generation of great defensive midfielders. Trapp won’t garner the attention of the more creative Luis Gil and Kelyn Rowe, but he will certainly play a large role in whatever success the Crew muster under Gregg Berhalter in 2014. Right now, the defensive midfield spot in the Columbus starting lineup is his to lose.

In his first season as a pro, Trapp made 16 starts despite missing time due to injury and international duty with the USMNT U-20s. His workload will increase significantly in 2014. A breakout campaign is only possible if he can handle the rigors of a full MLS season. If Berhalter trusts the 20 year-old and partners Trapp with a box-to-box player to facilitate the passing game, Trapp will have that breakout season. What that means for a defensive midfielder is tough since he’s not likely to be a regular name on the score sheet. Watching him play will tell us if Trapp meets the standard.

The 23-year-old Smith is the flyer of this bunch. He did well in limited time during his rookie campaign in 2013, but spent much of the second half of the season on the bench. Fortunately for Smith, there’s a new coach in town (former Fire boss Frank Klopas), and that could mean a second chance for the former University of New Mexico star to show what he can do on the wing for the Impact. Blake’s speed and energy is a weapon for Montreal in 2014.

The Impact are old, to put it bluntly, making an occasional infusion of youth necessary to keep their season on track. Smith should get substitute minutes at the very least, mixed in with the occasional spot start. Will that be enough to bring him to “breakout” level, especially if a good portion of his time comes when the Impact are chasing a game late? If he helps create goals, and improves on his own total of 2 goals from last season, it will be a boon to Montreal. If he does more than that, he’ll have a breakout season.