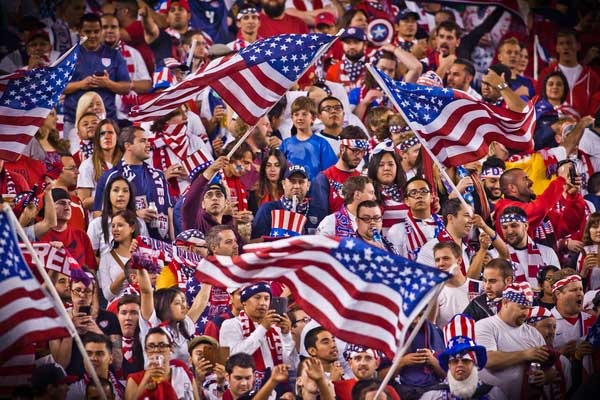 By Jason Davis – WASHINGTON, DC (Apr 15, 2014) US Soccer Players – Maybe it just comes with the territory when discussing the status of soccer in America. It’s been 20 years since the USA hosted the World Cup. That singular, identifiable moment was when soccer in America truly rose above “underground” status. We still have an insatiable need to measure interest in soccer as a means to validate everything that has happened since.

Enter Reuters, and an item about a poll on soccer interest in the United States.

The details of the poll almost don’t matter, particularly due to the lack of context provided by the story, but here there are for the sake of background:

The author of the Reuters story framed those numbers, culled from the responses of 1,416 people, with an overwhelmingly negative tone. The opening of the article suggests home support for the USMNT when the team heads to Brazil this summer for the World Cup could be “tepid.”

Included in the story are random musings from individual respondents that paints soccer as a sport of little interest in the United States. Only a brief focus on greater interest among Hispanic Americans does anything to mitigate the message that soccer isn’t anymore popular here than it was two decades ago when FIFA took a chance on putting their marquee event in the United States.

Of course, these numbers could tell different stories. Try this. If “two-thirds” of Americans don’t plan to follow the World Cup, that implies one-third do. In a country with a population of over 300 million, Reuter’s poll suggest 100 million people will partake of World Cup soccer this summer. That number is impressive on its own, even without considering that it represents a group of people roughly equivalent to the combined populations of Argentina, Portugal, and England.

It’s also impressive considering that America’s favorite sports product, the NFL, drew a record 111.5 million viewers for the Super Bowl. Soccer is doing just fine, thank you, no matter how the numbers of a poll of 1400 people are spun. Declaring support might be “tepid” ignores not only the passion inflamed by the USMNT in 2010, but a host of other factors that indicate otherwise.

More interesting than Reuters’ polling data or the article is the response from the American soccer community. As fractured as American soccer fans might be, it doesn’t take much to rile up them up as a group when any mainstream media outlet dares to question the progress of the sport in the United States. Any attempt to suggest soccer isn’t popular results in the loud gnashing of many teeth housed in the heads of ardent soccer supporters with a reflexive need to defend the sport. We’re all on “Team Soccer”, and the instinct to defend our team is hard to deny.

Watching the sport’s popularity grow isn’t enough for American soccer fans. It’s a function of impatience most importantly. It’s also due to the constant questions about soccer’s American viability going back to the days of Pele’s Cosmos. For every soccer fan there are two Americans more than willing to attack the sport, its fans, and its prospects.

Many of them seem to have sports talk radio shows or write sports columns for legacy publications. No wonder it’s so easy to provoke a response.

Reuters simply ran a poll and reported on its findings, choosing a negative stance in the process. Leaving issues of context aside, premeditation wasn’t in play. Nevertheless, the response to the Reuters piece and the framing of the poll numbers presents an opportunity to consider soccer fans’ reactions to any slight, perceived or otherwise.

Targeting a notoriously reactive community is a pretty simple way to game publicity. American soccer fans would be wise to avoid rising to the bait, but we’re not there yet.

Numbers, especially, have a power the American soccer community is unable to resist. The desperate need for statistics to prove that the game is growing strikes at the very heart of American soccer boosterism.

It’s evident in an obsession with attendance figures, TV ratings, and any data similar to the Reuters poll that attempts to measure fandom. It’s as if we can’t believe soccer has a bright future unless someone boils it down into simple, digestible figures. That’s regardless of what our eyes tell us is happening around us. Maybe we can’t be happy to simply ignore the voices of dissent and enjoy the game for what it already is.

American soccer is well past the point where it should need the validation. This is not a race. There aren’t distance markers laid out to pass before the sport officially matters here. Whether two-thirds of Americans are uninterested in what the World Cup will offer isn’t important. Even one-third of a country as large as the United States represents a massive audience that would excite any marketer.

It’s actually another number, one that doesn’t directly measure interest but is just as illuminating. That’s the amount of money paid out by American broadcasters for the rights to the tournaments. That tells us all we need to know.

The news cycle between now and the kickoff of the World Cup in June will include items that attempt to measure America’s level of enthusiasm. We already know that the game is doing just fine. None of them will be capable of revealing the true picture of our country’s relationship with the sport. Such a thing is almost impossible.

That should be enough to leave American soccer unconcerned, unbothered, and unburdened.