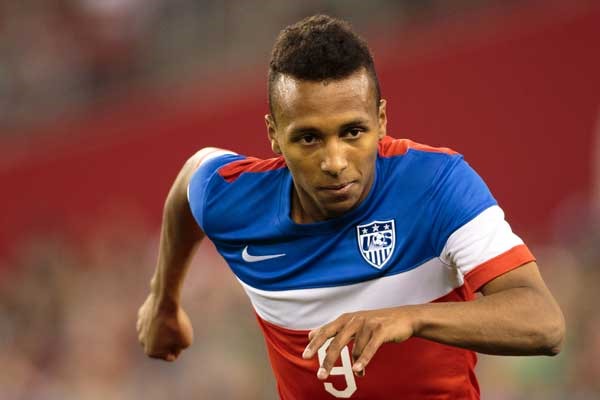 By Jason Davis – WASHINGTON, DC (Apr 2, 2014) US Soccer Players – For one of the two players idling his engine on the sidelines, waiting to enter the game in the 59th minute of Wednesday’s USMNT friendly versus Mexico in Arizona, nothing, save the latest uniform concept from Nike, was new. Landon Donovan had done this before. 155 times to be exact, a glittering international resume.

Donovan’s vast experience was evident in his demeanor. He didn’t simply wait for play to reach a stop and the referee to wave him on. He readied himself for the moment, content in the knowledge that it would inevitably come. He busied himself with a routine honed over more than a decade of friendlies, qualifiers, and World Cup matches. Donovan was unrushed and unworried.

For Julian Green, everything about that moment was new. The stage, the rivalry, the level, even his own team. Green officially joined just a week before courtesy of some expedited paperwork in Zurich. Because of that, his presence on the sideline, and the entry into the game it promised, was the most anticipated moment of the evening.

Green’s inexperience seemed to show. His body language (hands on hips, intense stare trained on the field) belied a flutter of nerves no one would begrudge him. He waited, perhaps not impatiently, but with an unmistakable muted fretfulness.

14 years ago, it was Donovan making his own debut in a friendly against Mexico as an 18-year old phenom. He scored in that game.

The similarities between Landon Donovan, he of 156 international caps and holder of the USMNT records for both goals and assists, and Julian Green, German-American product of the Bayern Munich academy and highly touted hope for the next generation of the USA, are plain to see.

Both arrived on the USMNT with big talent and big potential. Both were in the reserves at German powerhouses at the time of their international introductions. Both carried the burden of great expectations, although the spotlight is several magnitudes brighter for Green than it was for Donovan.

The spotlight is brighter for Green, at least in part, because of Donovan. Donovan’s exploits as a key figure in the rise of the USMNT from soccer curiosity to regional giant and World Cup fixture increased attention on the team. It turned international soccer into a prominent part of the American sports landscape. Donovan helped raise the bar.

There was symbolism, too, in the UMNT legend entering at the same time as the exciting youngster. It wasn’t a passing of the torch in the conventionally clichéd sense, but it did tie the longtime star and new hope of the USMNT together for one notable moment. When ESPN’s cameras cut to the image of Donovan and Green lingering near the fourth official, two distinct generations of attacking talent shared the screen.

After highlighting the occasion of Green’s debut and reflecting on the promise he holds, ESPN commentator Ian Darke remarked “Landon Donovan is on as well.” That simple statement, which seemed to relegate Donovan to a secondary role, said with no ill intent on Darke’s part, summed up the nature of the occasion.

Despite his records and influence, Donovan was overshadowed by the new kid on the block, just as he once overshadowed the stars of the generation that preceded him. Time is cruel. Talent is ephemeral. The future is always more thrilling in possibility than the past is in memory.

For the time being, Donovan and Green will overlap as members of the USMNT. Their two different eras of American soccer talent connect for a brief moment. It’s important to point out that Green remains a bundle of raw talent in need of refinement. No one should expect him to become a star from the outset. However, there’s no arguing that he is capable of a marvelous future. The hope thrust upon him is unconcerned with the pitfalls that could lay ahead.

Green is exactly like Donovan then. He’s the same as every young player of obvious ability is like the younger incarnations of their accomplished predecessors.

Once, Donovan was himself a kid laden with nothing but talent, thrust onto the biggest stage and asked to push the USMNT onto a new plane as a symbol of American soccer’s growing relevance. That he performed well enough to eventually become the greatest USMNT player of all time was never a foregone conclusion, but a reflection of his unique makeup and commitment to his craft.

If Wednesday night was the one and only time Green and Donovan take the field together, hope that we remember it for the symbolism of one generation melding into the next.

If the passage of time turns Landon Donovan and Julian Green entering USA versus Mexico in the 59th minute of a friendly in 2014 into a noteworthy moment. If it’s remembered by the fans who witnessed it and falsely claimed by those who didn’t. Well, it will mean that Green reached heights similar to those Donovan achieved while wearing the colors of the United States.

When the time comes for a new player to overshadow Julian Green, even momentarily, by the debut of the next great American prospect, the spotlight will be even brighter still.