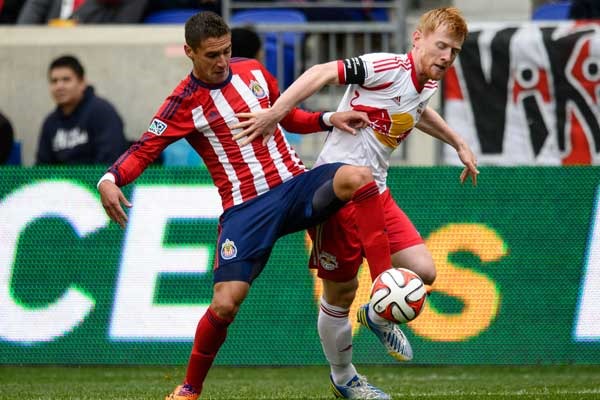 By Jason Davis – WASHINGTON, DC (Apr 2, 2014) US Soccer Players – Week 4 of the 2014 MLS season highlights one of the major officiating focuses outlined before schedule began. Prior to the season, MLS and PRO tell the clubs that referees will take a stricter view with some rules than in prior seasons. As with so any things in MLS, this isn’t something directly relayed to the fans. However, ESPN’s Alexi Lalas tweeted them from the MLS television meetings in February.

This season @MLS refs will be focusing on 6-second GK rule, holding in the box, offside interference and foul challenges.

Holding and grabbing in the box will result in a called foul more often if only because referees are paying closer attention to that particularly brand of transgression. Because holding fouls occur on almost all interactions in the penalty areas, most notably on set pieces, 2014 should see a significant uptick in whistles resulting from holding and grabbing.

Though it probably doesn’t need saying, here’s a reminder that whistles on fouls in the box mean penalties. Penalties change games.

New York’s Richard Eckersley and Toronto FC’s Doneil Henry learned this lesson the hard way. Both players found themselves on the bad end of penalty decisions this weekend. In Henry’s case, it might not have played a significant role in the final score against RSL. Eckersley no doubt rues his decision to put his hand on Chivas USA’s Thomas McNamara on Sunday. If Chivas USA doesn’t get that penalty, and Erick Torres doesn’t fire it past Luis Robles, perhaps the Red Bulls secure three points in their home opener rather than settle for a late equalizer and a single point in the standings.

The question, in light of those penalty calls, is whether players across MLS heed the examples made of Henry and Eckersley. Neither did anything overly egregious, at least by the previous standards of general soccer and MLS play.

Henry’s battle with Alvaro Saborio was arguably a 50/50 situation, where both players were guilty of using their hands to restrict the movement of the other. McNamara sold the contact with Eckersley when both players moved to intercept a cross into the box just in front of the keeper. In previous years (forgiving the penalty records of the respective referees), it’s quite possible neither would be a foul at all.

Too often, the refereeing focuses from season to season that trickle out from PRO and MLSHQ seem arbitrary or unnecessary. Giving extra attention to the 6-second rule, for example, seems strange. Why would it be necessary identify goalkeepers holding the ball beyond the mandated time period as an area of concern?

Throw it all under the heading of “entertainment”, and the belief on the part of MLS and its referee program they must step in to adjust their particular brand of the game. The focus on the 6-second rule is about cutting down on time-wasting and keeping the ball in player for a greater portion of the game. American audiences, perhaps more than almost any other version of soccer fans on the planet, are disinclined to accept the sort of blatant stall tactics that are de rigeur elsewhere.

Addressing the amount of grabbing and holding that goes on in the box is emblematic of the same mentality. The goal is to encourage offensive play, not award penalty after penalty. By zeroing in on grabbing and holding, MLS is working to change behavior over a course of time.

The actions of the Disciplinary Committee (which could be busy this week thanks to a handful of dangerous tackles) are part of the program as well. Simulation, ugly challenges, and violent off-the-ball actions make MLS less attractive than it could be. By giving the Disciplinary Committee such a prominent role in how the league shakes out week-to-week, MLS made a conscious effort to try for a more visually appealing League.

A few years on from the start of the DiscCo’s mandate, incidents of the type that injured Steve Zakuani and Javier Morales in that grim, reckless season of 2011 are less frequent. MLS is still a physical league, and there remain the occasional horror challenge that risks breaking legs or rending tendons, but the issue is no longer as pressing. Attacking players are subject to danger than before, even if consistent fouling is still a problem.

Does that mean that the anti-grabbing initiative to similar effect? Will the players learn, as they seemed to with the crackdown on potentially injurious tackles, that it’s simply not worth holding an opponent in the box to keep him from gaining an advantage? Perhaps, though the seriousness of the tackling issue makes grabbing and holding seem benign by comparison.

2014 could be the year of the penalty if players refuse to take notice. Spot kicks will change more games. The impact on the standings could be significant.

If this weekend is any indication – and remember it was only the second round played with the regular referees back on the job – the initiative put in place by MLS and PRO ahead of the season will be more than a bit of bluster. There won’t be any excuses available when the whistle blows and the man in the middle points to the spot.

Sometimes, it takes follow-through to change behavior. Sometimes, talking isn’t enough. Sometimes, the hard stick of discipline must follows the words of admonition, because without it, those words are only abstract noise.