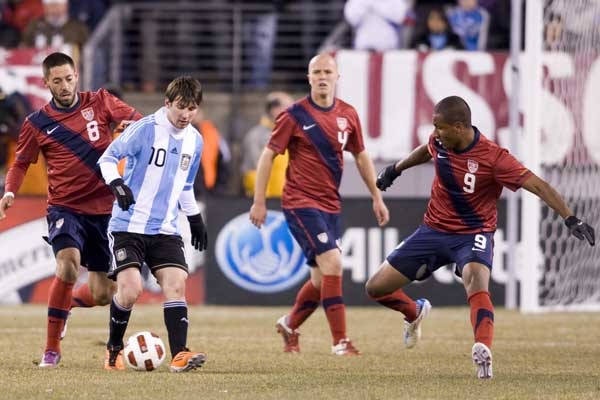 By Clemente Lisi – NEW YORK, NY (Apr 28, 2014) US Soccer Players – Round up a few soccer fans in a bar and the question inevitably comes up. Who is the greatest soccer player in the world at the moment? A few names normally dominate the conversation, but the debate is really only between two players: Real Madrid and Portugal’s Cristiano Ronaldo and Barcelona and Argentina’s Lionel Messi.

That takes us to the World Cup. The World Cup is – above all else – about 32 countries competing for the chance to be crowned world champion. Although soccer is a team sport, individual players can make all the difference. That is true at the World Cup like no other tournament. Think Pele and Brazil’s first three World Cups, Diego Maradona and Argentina’s triumph in 1986, or Zinedine Zidane and France’s victory in 1998.

This summer at the World Cup in Brazil, two players will stand out above the rest. Portugal’s Ronaldo and Argentina’s Messi will have to be in top form if either nation hopes to lift the Cup. How will both players do? Who will have the better World Cup? Do past World Cups serve as a gauge? Have the 2013-14 Liga season or Champions League given us any clues?

For answers to those key questions, we gave Ronaldo and Messi the by the numbers treatment this month in an attempt to uncover what these two players will do at the World Cup. The following comparisons do not take into account the overall performances of the players’ respective clubs or national teams.

Both players have underperformed at previous tournaments. That means both will be seeking a measure of redemption. Not only have their respective countries not done well, but also as individuals, Ronaldo and Messi, have scored very little at World Cup level. That’s a big difference from their respective club performances over the past few years.

Ronaldo and Messi have both featured in two World Cups (2006 and 2010). Overall, Ronaldo has two goals in 10 games. Messi has one goal from eight games.

If you combine the Liga and Champions League seasons, Ronaldo scored 47 goals and 13 assists this season in 43 games as of this past weekend. Contrast that with Messi, who has 40 goals and 13 assists in the same number of games. If you look solely at the numbers, then Ronaldo has had a better season.

Both players have had a great season with just three rounds left to play. Atletico Madrid may be on its way to winning the title, but both Ronaldo and Messi have had wonderful seasons on an individual level. Additionally, Ronaldo has been playing with an injured knee as of late, while Messi suffered a torn hamstring earlier in the season. Both have played in the same number of league matches (28) with Ronaldo scoring 30 times to Messi’s 27. However, Messi has more assists (10 compared to Ronaldo’s 8) as well as less shots on goal (146 to 202).

Overall, that gives Messi a better accuracy rate. Also, Messi, as an attacking midfielder, has the dual task of scoring as well as setting up his teammates. As a winger, Ronaldo’s main aim is shooting and scoring goals. Ronaldo’s crosses do sometimes serve as assists, but that is more an exception than the rule.

The Champions League statistics don’t directly compare to La Liga because of the calendar. There are less Champions League games with significant time between rounds. What shape a player is in varies depending at what juncture in the season a critical game occurs.

If you include the early rounds, Ronaldo has 14 goals in the tournament compared to Messi’s eight. Again, Messi has taken fewer shots (22 compared to 36) over that span and played fewer minutes (630 versus 783). Ronaldo’s Real Madrid is in the semifinals and a step from next month’s final. Barcelona exited at the quarterfinal stage.

Which player will do better at the World Cup? It’s difficult to predict. However, if you take into account the performances of both players this season — without factoring in the argument of which team is better Argentina or Portugal — then the advantage, in my opinion, goes to Messi. It could very well be Ronaldo finishing as top scorer, but Messi may be in better form to lift the trophy in Rio.

We shall see. For now, the debate rages on.