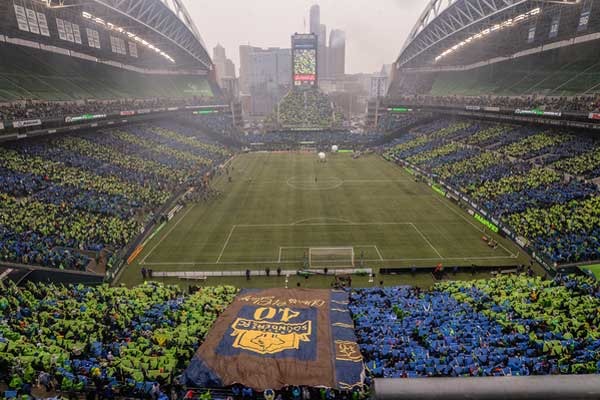 By Jason Davis – WASHINGTON, DC (Apr 9, 2014) US Soccer Players – There’s nothing quite like the idea of American soccer played in an NFL stadium to restart an old debate among the MLS rank and file. MLS spent years working to soccer-specificity. In many markets, that meant leaving NFL stadiums for smaller purpose-built MLS stadiums.

According to reports, Atlanta is the next stop on the MLS expansion tour. That new team will play in the as-yet-constructed NFL stadium that will be the new home of the Atlanta Falcons. It’s the latest example of MLS setting aside soccer-specificity based on an individual market. Hey, it works in Seattle so what’s the problem?

This is the new MLS, after all, a league revived through building soccer-specific venues. Soccer-specificity creates the environment that pushes MLS forward. Putting a team in a stadium designed for an NFL team, one with artificial turf no less, smacks of MLS 1.0.

It feels like MLS is moving backwards, even if it means moving forwards on the wider commercial front.

Fans have every reason to find the Atlanta news troubling. Where once American soccer took to football fields out of necessity, the expectations are now naturally higher. The goal is supposed to be to move out of NFL venues, not choose to play in one. We’ll get to Seattle, but MLS expansion needs soccer stadiums, preferably for a pre-existing fan base.

The objection isn’t just that the presentation suffers in a football stadium. Take a look at a New England game for a throwback. The legitimate fear is that soccer will always be a second-class citizen in a building that also houses an NFL team. The shadow cast by America’s favorite football code is all encompassing.

Does MLS really have a choice here? That’s the question worth asking. Expansion is always about money. For MLS, it’s also about finally completing their footprint by placing teams in the Southeast. Whatever Atlanta Falcons owner Arthur Blank pays to join the top-flight soccer revolution, Atlanta is the anchor city in the MLS effort to penetrate the previously untapped Southeastern United States television market. There is a vast portion of the map, even outside of Florida, with no MLS team. Expecting potential fans in those areas to maintain interest in a league with no local or even regional connection is expecting too much.

More than almost any other market, Atlanta is a regional city that serves as a hub of attention for millions of people living outside of urban areas. It’s a lot of space on the map, a lot of fans, and a lot of potential TV and sponsorship dollars.

However, the desire to improve the league’s television contract doesn’t justify placing a team in an NFL stadium. That’s particularly true if the MLS team plays second fiddle to the football team. The Atlanta Braves were one of the biggest regional teams in sports during the superstation cable era. Atlanta lost two NHL teams and their basketball and football teams aren’t regional powers.

It’s fair to be cynical about Atlanta as a sports town, much less as a soccer market. There’s a long list of American cities that will support a summer friendly. Supporting MLS requires fans showing up week after week.

What makes MLS expansion successful is no secret. In the new era of the sport, it requires not only spending just to get the rights to field a team. It means spending on that team. That’s especially true if ownership isn’t building a soccer-specific stadium. It requires commitment in the form of significant outlay.

The model, especially for a team playing in an NFL stadium, is the Seattle Sounders. Their partnership with the NFL Seahawks that ended just this year. The Sounders have never been an afterthought at Qwest/Century Link Field. The soccer team playing in an oversized NFL stadium allowed for unprecedented attendance numbers and a “big time” feel most American clubs could only dream of. The Sounders success is the counterpoint to another New England.

The problem with that is how difficult, and how exceptional, the Sounders’ prosperity truly is. It took a group of very smart, soccer-savvy people, the unwavering support of Seahawks owner/Sounders minority partner Paul Allen, and a confluence of civic/sports happenings to give the Sounders a leg up in the market.

Of course, even with the size of the soccer crowds in Seattle, some MLS fans won’t bend on the issue of artificial turf. For the good of MLS, and the profile boost Seattle’s success provides, turf is a necessary evil in the Pacific Northwest. The saving grace is that technology is getting better all the time. Fake grass might one day play like the real thing. Artificial surface or not, the accounting on allowing Seattle to launch in an NFL stadium still reads in the black.

Artificial turf is a necessary evil in Atlanta as well. The weather in Georgia in the summer would not make for good soccer. If MLS needs Atlanta, and the crowds are going to be respectable, an indoor or retractable-roof venue is necessary.

Domestic soccer has made great strides in recent years, but it has not reached the point where an indoor soccer-specific stadium is a possibility. Expanding to Atlanta makes the tradeoff of an indoor, NFL stadium and artificial turf a near requirement for success. The Falcons even made allowances for a possible MLS team sharing the building in their designs, incorporating the same upper deck-shrouding elements that make BC Place in Vancouver an effective soccer venue.

All of this brings about the conclusion that the situation in Atlanta is not quite a return to MLS 1.0. It’s not a unique Seattle-like setup either. It’s something different. It’s a middle ground with an eye on the bigger picture that probably gives MLS the best chance to find success in a difficult market.

The bar set by recent expansion success has spoiled American soccer fans. That, more than an apparent return to the bad old days of MLS teams playing in front of mostly empty NFL stadium on poor artificial surfaces, is the element at play. Most don’t see Atlanta as a soccer market waiting on an MLS team. Maybe Atlanta doesn’t “deserve” a team like Portland, Seattle, Montreal, Philadelphia, and Vancouver did. Then again, maybe that shouldn’t be the standard.