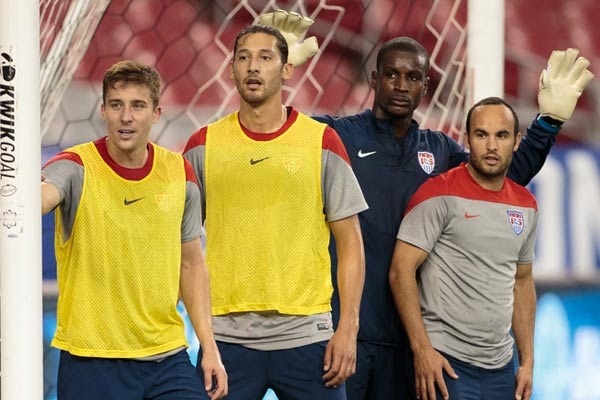 By Charles Boehm – WASHINGTON, DC (Mar 31, 2014) US Soccer Players – For the USMNT, life under coach Jurgen Klinsmann has been many things. Exhilarating, exhausting, destabilizing, at times frustrating, and almost always pressure-packed…but never uneventful.

The lead-up to Wednesday night’s USMNT friendly against Mexico in Glendale, Arizona proves as much. As if the stakes weren’t high enough with World Cup spots and border-rivalry bragging rights on the line, other unexpected developments for the USMNT have cranked up the intrigue ahead of yet another highly watchable clash between CONCACAF royalty (11pm ET – ESPN).

The successful – and ahead-of-schedule – recruitment of Bayern Munich teenager Julian Green, Klinsmann’s startling coaching staff reshuffle over the weekend, and the enforced absence of Puebla FC duo DaMarcus Beasley and Michael Orozco have presented the USMNT camp with questions we didn’t know we’d be asking at this stage.

All of that is well over and above the real dilemmas that El Tri coach Miguel “Piojo” Herrera and his marauding, unconventional 5-3-2 (or 3-5-2, depending on who you ask) system are likely to pose. Mexico needs further proof that they have utterly consigned 2013’s annus horribilis to the history books.

With all this in mind, here are a few pressing questions for Klinsmann and his men to answer at the University of Phoenix Stadium.

It’s worth wondering whether the USMNT would have so publicly expressed their dismay with Puebla’s decision not to release Beasley and Orozco if there weren’t so many lingering uncertainties swirling around the corners of the defense.

Klinsmann has effectively taken two triage actions from World Cup qualifying and made them permanent. He moved “RunDMB” – an attacking-minded winger at heart as well as at his club team – back to left back. He also converted utility midfielder Brad Evans into a starting right back.

Geoff Cameron is still in the picture at the latter spot and Klinsmann expressed happiness with his outing there in last month’s friendly loss to Ukraine. Yet the presence of the relatively young duo of Tony Beltran and DeAndre Yedlin – whose senior international career currently measure in minutes, not games or years – in Arizona strongly suggests that the USMNT coaching staff are still mulling other options, not to mention depth concerns.

As for left back, at this point those with an historical perspective can only chuckle at the position’s enduring ability to befuddle USMNT leadership over the decades. Klinsmann – who once breezily asserted that “anyone can play left back” – seems disinclined to call up a specialist in the role and it’s left him with a series of awkward compromises. This week Michael Parkhurst appears to be the latest Johnny on the spot, though Orozco might well have gotten a shot if he were present.

What’s the USA’s formation, and who’s in charge of setting it?

On some level these Xs and Os on the board are less important than the overall mindset and the individual players’ understanding of roles and responsibilities. That said, it’s hard to shake the impression that Klinsmann has never really stopped experimenting with the best shape for his squad. Their three daunting World Cup opponents will each require a custom-tailored tactical outlook. In general terms it’s now time to decide on who’s best at what position, what spaces those positions should take up, and how they should interact with their teammates.

It’s not being uncharitable to point out that the gritty details of these knotty questions are not Klinsmann’s traditional strong suit, as shown in his skills set and previous managerial posts. There was a vague sense that they fell under the purview of his first assistant and longtime colleague Martin Vasquez. With Vasquez leaving the senior squad in the ultimate “news dump” fashion – the closing paragraphs of a Sunday evening press release – questions arose again.

They will probably only be answered by crisp team performances showing off effective tactical preparation that maximizes the abilities of the players selected. Meanwhile, Herrera’s wingback-fueled El Tri displays a starkly contrasting methodology: Stick to a system and pick the talent that fits it best.

Which late runs will find the net?

This isn’t a literal question. Instead, it’s a description of the last-minute surges that players occasionally make around this point to earn a place on the World Cup roster despite having had relatively little to do with the qualifying cycle.

A few days ago we discussed previous versions of this phenomenon; this year’s contenders include Green, Yedlin, Beltran and his Real Salt Lake teammate Luis Gil. The likes of Mike Magee and Benny Feilhaber had hoped to spring into this discussion, but are not in Arizona and thus find themselves further back in the pack.

Klinsmann can still call less familiar faces for next month’s send-off series before the final 23 spots are doled out for Brazil. The leading late runners need to seize any chance they get against the old enemy in front of a loud, passionate crowd on Wednesday.