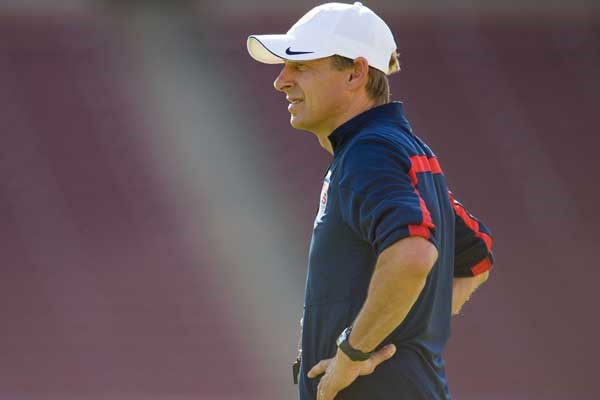 By Clemente Lisi – NEW YORK, NY (May 19, 2014) US Soccer Players – USMNT coach Jurgen Klinsmann is currently preparing the squad for the World Cup. Klinsmann is no stranger to the tournament. He played in three of them, winning one in 1990, and later coached his homeland Germany to a 3rd-place finish in 2006.

“I think it has certainly a big value and big influence in it because you went through those things already before and you know what kind of things play into a World Cup period as a player or as a coach,” Klinsmann said during a conference call with reporters last week. “You know that a World Cup is unique in itself. It has a lot to do with momentum as I said before.”

As a striker, Klinsmann had it all – height, athleticism, and was lethal with both head and feet. As a coach, he has been equally impressive – a master motivator, astute evaluator of talent, and cool under pressure.

Now, as Klinsmann prepares to guide the USMNT to the World Cup finals in Brazil in less than a month, we give the former German international the “by the numbers” look at those four World Cups as a player and a coach.

Klinsmann’s first World Cup was also his most successful. The striker, winner of a bronze medal with West Germany at the ’88 Olympics, was at the height of his playing career. Already a starter in Franz Beckenbauer’s lineup, he was coming off his first season with Italian club Inter Milan, where he scored 13 goals after teaming up with his German teammates Andres Brehme and Lothar Matthaus. At the World Cup, Klinsmann scored three goals – including one in the hotly contested Round of 16 match against the Netherlands in Milan – to help Germany reach the final in Rome. Germany defeated Argentina 1-0 on a Brehme penalty kick in the waning minutes to win the World Cup.

Klinsmann was still a powerful striker when USA ’94 rolled around, although he was part of a German team that had failed to add any young talent over the course of four years. As a result, the Germans, playing as a unified nation after the collapse of the Berlin Wall, disappointed by only reaching the quarterfinals. They lost to a surging Hristo Stoichkov-led Bulgaria at Giants Stadium. Klinsmann ended the tournament with five goals, but it wasn’t enough as the team wilted under the heat.

Klinsmann was one of the few remaining veterans, along with Matthaus, left from that ’90 squad. Placed in Group F with the USA, Germany cruised to the knockout stage (defeating the Americans 2-0 with Klinsmann scoring the second goal), but was again eliminated in the quarterfinals. This time it was Croatia knocking out Germany, another team on a Cinderella run. Klinsmann scored three goals – only the third player at the time to score in three straight World Cups – in what would be his last World Cup as a player.

After taking over the German National Team in 2004 for former teammate Rudi Voeller, Klinsmann sought to rebuild the squad. At the 2006 World Cup in Germany, Klinsmann earned the praise of his country after the team went 3-0 in the first round (beating Costa Rica, Poland and Ecuador) and reached the semifinals. A 2-0 defeat to eventual-champion Italy ended Germany’s run and Klinsmann had to settle for a third-place finish. He stepped down as coach immediately after the tournament – despite calls for him to stay – to take some time off.

It remains to be seen what Klinsmann can do with the USMNT and how far this team can go. Placed in Group G with Germany, Portugal and Ghana, this is a great chance for the Americans to exact some revenge (see Ghana), and an opportunity for Klinsmann to show the world that he and the US have come a long way since the 2006 tournament.