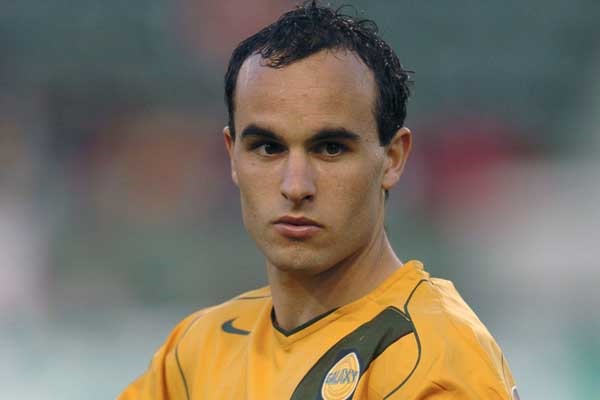 By Tony Edwards – San Jose, CA (May 27, 2014) US Soccer Players – Enough has been, and will continue to be, written about the MLS all-time goal scorer in recent and coming days. Let’s hope all of them make a basic but appropriate point. Without Landon Donovan staying in MLS, the league isn’t what is it, and what it is becoming. Watch any of the goal compilations of Donovan’s record haul and you see what makes him the defining player in MLS history.

As for other stories this weekend, if you are Dominic Kinnear and Houston, do you chalk it up to a bad night, a limited squad, Steven Lenhart, and fatigue or is it more than that? Houston has only scored 16 times in 14 games and has a -8 goal difference already.

Of the many possibilities, what is maybe the best aspect of the landon135.com website?

Whichever version of MLS we are in (1.5? 2.0? 19?), this well done website not only pays tribute to the best player to ever play in the League, but it showcases Donovan’s, and the League’s evolution. For those who weren’t around during the earlier years, even these short goal clips give an idea how the MLS has changed, and mostly for the better.

What you notice on first view are half empty stadia, a high school gridiron stadium for the Dallas Burn, and some questionable hair coloring choices.

More seriously, the clips of his first goals for San Jose can’t help but bring back what an absolute sensation Donovan was (and is) when he first came back from Germany. Whenever he touched the ball, the noise level in Spartan Stadium would increase significantly. When he delivered something amazing, we’d all turn to each other and shake our heads at what we’d just witnessed.

If you’re an Impact fan, or player, what’s the last thing you want to hear from your coach?

“When the referees are protagonists in the game, it’s never good,” Klopas said to the League’s website. “It’s a shame, because I felt he did a very, very poor job. It’s nothing to take away from Colorado and them scoring. For me, he had a very bad game.”

Or maybe, it’s true that good teams get those 50/50 calls and not-so-good teams don’t. Perhaps at this level, defenders would keep their hands off attackers in the penalty box. How about rather than clearing the ball after a corner kick, you get the ball away from the center of the field (see the Rapids’ third goal).

At the rate Montreal is scoring this season, giving away goals isn’t such a great idea. While that is stating the obvious, if the Impact were scoring 2 or 3 goals a game, you could overlook these mistakes.

Is any of that entirely fair or the coach’s responsibility? No, but those are the kind of mistakes bad teams make. Montreal has some talent, but, you know, maybe the problems in Montreal run deeper than just who has been on the sideline.

It kind of got lost as it happened on Friday, but is Dom Dwyer your Golden Boot winner this season?

Probably not, but Dwyer now has 10 goals already this season. He’s scored in four straight games. Overall Friday evening, Toronto had 32% possession. And while you can say possession is overrated, Kansas City has to do more with almost 70% of the ball, especially given how much of it was in Toronto’s half of the field.

There’s a number of reasons for KC to think ‘we got a point and lived to fight another day,’ but that was two points dropped. It’s not too early to start thinking about how home field helped them in the playoffs last season and KC is closer to not being in the playoffs than they are to first place.

How entertaining was that Vancouver – Seattle game?

Amazing skill by both teams, back and forth, some interesting (as Kasey Keller put it) calls by the referee, 24 shots on goal by Vancouver, and a brain freeze by the Seattle goalkeeper.

And how dreadful was Sunday’s San Jose – Houston game?

San Jose’s goals on Sunday. Carey Tally picked up a back pass from a defender and the Earthquakes scored from the subsequent free kick. A penalty kick on a misplay in the box. A hustle play when the Houston defense left their goalkeeper stranded.

Any of us could pick two random games from any weekend and pair them and one would probably come out with the short stick. Nothing going into San Jose – Houston exactly promised high quality and a riveting spectacle between players on World Cup call-ups and injuries.

However, as Vancouver – Seattle reminded us, some depth and a commitment to playing attacking soccer matter. I’m not saying it was a perfect game by any means, but everyone got their money’s worth in Vancouver, even though the home team didn’t get all three points.