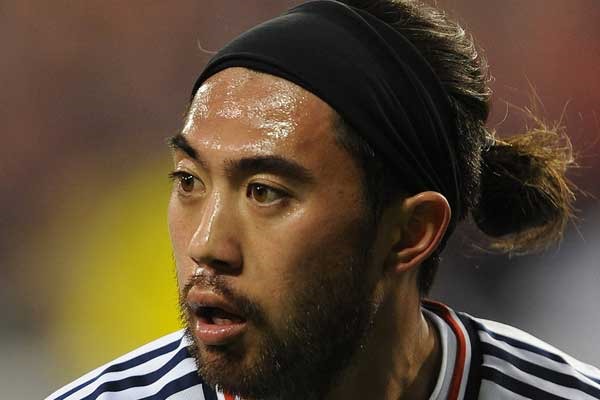 By Jason Davis – WASHINGTON, DC (May 21, 2014) US Soccer Players – Lee Nguyen’s path to MLS stardom ranged far, had more than its share of bumps, and rarely looked certain to deliver him to where he is now. Where Lee Nguyen is now is playing provider, creator, and inspiration for the New England Revolution as part of a multi-headed attack that is atop the MLS Eastern Conference table after a pair of dominate 5-goal performances. Eleven games into 2014, Nguyen is making a case that he’s the league’s Most Valuable Player.

The Revolution might consider themselves lucky to have Nguyen’s services. After the Texas-born midfielder decided to trade superstardom in his parents’ native Vietnam for Major League Soccer in 2012, it was the Vancouver Whitecaps who secured his rights via the allocation order process. When the Whitecaps decided they didn’t have room for Nguyen and waived him, New England scooped him up.

Nguyen started his career at PSV in the Netherlands, joining the club from the University of Indiana after his superb freshman season. From there it was on to Denmark before heading to Vietnam. Playing in the V.League limited his profile in the United States.

Nguyen’s path gives the impression he’s a late bloomer, having only come into his abilities in his mid- to late-20s in the manner so many American players tend to do. While most examples of late bloomers come out of the college soccer system, Nguyen’s time off the radar in Vietnam served the same purpose, no matter how well he did there. Even if the Texan was improving year-to-year, first for Hoàng Anh Gia Lai and then Becamex Bình Dương, the lack of awareness of his exploits there made him an unknown quantity.

On Saturday against the Philadelphia Union, Nguyen had a goal and an assist. The goal was Nguyen’s fifth of the season, while the assist was his first. If there’s some surprise over Nguyen’s low assist total, it’s understandable. The 27-year old’s influence in the Revolution attack is so prominent, it seems odd he did not have an assist before Week 11 of the MLS campaign. A creative midfielder like Nguyen is supposed to be more provider than finisher.

What the number actually reveals in the context of the Revolution season is that Nguyen’s excellent play is about much more than a single pass that happens to result in a goal. Counting stats doesn’t measure the importance of Nguyen to New England.

Playing in the center of midfield, Nguyen is a conduit for Revolution possession, funneling the ball to a host of attacking players while also possessing the ability to dribble at defenders. All of that action, and his adept feel for what ball to play when, puts the onus on defenses to choose between stopping Nguyen and attempting to mark his teammates.

Ten goals in two games speaks for itself as a credit to the entirety of the Revolution lineup. Without Nguyen, however, it’s worth wondering if New England would be nearly as prolific.

Nguyen’s play helps Teal Bunbury’s shift to the midfield work because the former striker is receiving the ball in places where he can use his speed and power to great effect. Nguyen’s play is the key to unleashing Diego Fagundez for the goals that were slow in coming this season. Nguyen’s play is what keeps the absence of Kelyn Rowe – another of New England’s young, burgeoning stars – from hurting the team more than it otherwise might. Nguyen’s play is what allows the initiation of rookie Patrick Mullins into the professional game to be a smooth process that benefits the Revolution with goal scoring right out of the gates.

Would Nguyen be here, starring for one of the league’s most exciting teams and playing the silky smooth facilitator to a group of younger talent if it weren’t for his globetrotting past? When his European experience ended, Nguyen found a soft landing place in Vietnam. When it was time to take on a new challenge, he signed with MLS and let the allocation chips fall where they may. That experience led to the disappointment of Vancouver only to have him arrive in a place perfect for his talents.

Maybe Lee Nguyen could have been just as good with the Whitecaps had Martin Rennie given him the chance. There’s an element of hindsight at work in Nguyen’s recent success, but it’s unfair to say he hasn’t been consistent with his contributions to the Revolution.

The best we can do is presume that something about this team, this coach, and this system agrees with Nguyen in a way that any other system might not. When a player hits his stride so forcefully as Nguyen has done, that’s the only explanation that seems right.

Nguyen’s excellence is not new, though the degree of that excellence might be. The Revolution won’t keep up a five-goal pace, which presents a likely future in which Nguyen isn’t grabbing quite so many headlines. That reality won’t mean he’s not equally as crucial to whatever success New England will have, but it does suggest the possibility his MVP buzz will fade.

This is the moment, then,  to celebrate Nguyen and his unlikely path to a key role in an immensely enjoyable team that teeters on the precipice of something special in 2014.

It was Nguyen’s added time goal in San Jose that finally got the Revolution season started in Week 4. It will also be Lee Nguyen who drives the team, surprising as New England’s rise may be.