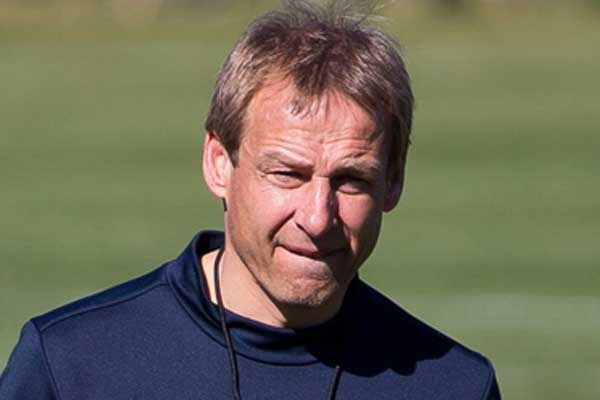 By Charles Boehm – WASHINGTON, DC (May 23, 2014) US Soccer Players – Not for the first time, Jurgen Klinsmann has gobsmacked the US soccer community with Thursday evening’s release – ahead of schedule – of his final 23-man roster for the 2014 World Cup.

A range of bold and unexpected selections have set pundits and fans chattering as the German-American coach’s unconventional approach to talent evaluation and team construction shows itself again. Klinsmann’s choices leaves many wondering just what they really know about the USMNT boss and his outlook.

The USMNT finds itself in a position not unlike that of Klinsmann’s native Germany in the run-up to World Cup 2006/ Puzzlement and unease reigned as the host country entered the event as, for once, an unknown quantity.

But before Jurgen the manager, there was, of course, Jurgen the player. Might his experiences as a star striker in three World Cups – experiences that ran the gamut from epic triumph to galling disappointment – prove just as influential to his leadership of the US National Team in Brazil this summer?

So USSoccerPlayers.com took a look back, in search of lessons that might have stuck with Klinsmann the longest.

All of Germany – and much of Europe – was gripped by euphoria as the Iron Curtain fell in the months leading up to the tournament. While the political process of German reunification did not progress quickly enough for East and West to compete together, there was an extra burst of pride and purpose as captain and soon-to-be FIFA World Player of the Year Lothar Matthäus led a talented West Germany squad spearheaded by Klinsmann’s razor-sharp finishing.

With that wind at their backs, Die Mannschaft were bold, organized and clinical, sweeping aside Yugoslavia and the United Arab Emirates in the group stage by 4-1 and 5-1 score lines, respectively, before dispatching reigning European champions the Netherlands in the Round of 16.

Klinsmann, then a rising star at Inter Milan, scored in all three of those games. Though he was kept quieter in tense victories over Czechoslovakia and England, there was a sense of destiny as his team booked a final berth. The 1990 final created a long-awaited chance at revenge from 1986 – against defending Cup holders Argentina.

Germany’s vibrancy stood in stark contrast to the tournament’s dour, negative tone overall. Defensive tactics and cynical physicality ruled, so much so that FIFA adopted dramatic rule changes in its aftermath – including stricter foul interpretations, no hands allowed on back passes to the goalkeeper, and three points for a win instead of two.

A clever, dynamic attacker like Klinsmann was always liable to be a target for physical play. In Italy, he established a checkered reputation when he responded in kind, most memorably in the World Cup final. He made history in the 65th minute when he drew a foul on Pedro Monzon that led to the Argentinean defender becoming the first player ever ejected from a World Cup final. Klinsmann’s canny role in the red card earned him a place on several “worst dive ever” lists, as he vaulted over Monzon’s lunging challenge and threw himself to the pitch theatrically.

Andreas Brehme’s late penalty kick won the Germans their third world championship. Klinsmann received Best XI honors. He was on top of the world, and it seemed, on some level, inconceivable that this would be his only trip to the highest summit of his profession. Yet it was, with Klinsmann only lifting the trophy in his debut World Cup.

“I pity the rest of the world,” said Franz Beckenbauer as he exited the head coaching post in triumph after Italy 90. “If we now add the players from eastern Germany, we are unbeatable for years to come.”

Four years later, Die Mannschaft found themselves dumped out of USA 94 far sooner than anyone expected. Falling 2-1 at the quarterfinal stage to an unheralded Bulgaria team.

“The quarterfinals do not ordinarily count as an early exit, but then the West Germany of the 1980s and 1990s was not an ordinary side,” wrote Robert Smyth for SI.com four years ago. “It had reached each of the three previous World Cup finals; it was European champion (in 1980); it had a robotic consistency that meant many opponents were beaten before the game had started.”

Klinsmann was a live wire as usual, scoring four of his team’s five goals in the round-robin stage as they sailed to first place in Group C, then bagged another in a 3-2 Round of 16 win over Belgium at Soldier Field in Chicago, where the Germans had found a welcoming home base for the tournament. His first of two strikes against South Korea in Dallas was an utterly scintillating piece of skill, an instinctive, swiveling finish widely considered one of the greatest goals in World Cup history.

He lived up to his floppy reputation again against Bulgaria, drawing a marginal PK call against Yordan Letchkov that enabled Matthäus to put Germany up 1-0 from the spot. When a Rudi Voller finish was ruled out for offside and an Andreas Moeller chance clanged off the base of the post, a semifinal berth looked to be a formality. A rapid-fire turnaround late on saw Hristo Stoichkov, then Letchkov, score two goals in a four-minute span to snatch the victory away from the defending champs in truly stunning fashion.

“We lost a game that we couldn’t lose,” said Germany forward Thomas Haessler, while Stoichkov offered a different take: “God is Bulgarian.”

So the champs flew home early, opening the door for Brazil – who showed an unexpected reserve of resourcefulness and steel usually expected from the Germans – to secure their fourth World Cup triumph. Klinsmann had been world-class, but his colleagues weren’t, and he took away a lesson that may still guide him today.

“There is a difference between arrogance and confidence. And if you have three or four players on a 23- or 24-man roster that thinks it’s going to be easy you are done,” recalled Klinsmann in Wall Street Journal interview last year. “We thought we won it already. It was one-nil up, we scored a second goal, it was disallowed. It was a clear goal, we thought, at Giants Stadium, and suddenly they hit you with a free kick and a header and within a few minutes the game was over. And you stand on the field and you say, ‘Hold on a second. Rewind. What just happened? We are the better team.’”

In the words of one German outlet: “It had been a poor title defense.”

The Germans regained glory in 1996 when they navigated a crowded field to secure their third European championship title. Klinsmann was now captain of the side (an honor Matthäus claimed his teammate had schemed to steal away from him). So there was renewed optimism as they crossed the border to hunt the world’s biggest prize two years later, led by a supremely experienced, but aging, core.

Still managed by Beckenbauer’s successor Berti Vogts, Germany again sauntered through the group stage undefeated, starting with a stress-free dispatching of Steve Sampson’s US side, where Klinsmann netted the clinching goal. Germany needed a second-half comeback to overcome Mexico in the Round of 16, with Klinsmann and his strike partner (and later, assistant coach) Oliver Bierhoff both converting.

Another Eastern European upstart was waiting in the tall grass in the final eight. Young, tiny, warn-torn Croatia took revenge for their Euro 96 knockout loss to Germany with a performance for the ages, upsetting the favorites 3-0 in Lyon.

The eventual Golden Boot winner, Davor Suker, stole a page from Klinsmann’s book with a canny bit of playacting – “rather provocative,” in Vogts’ words – after a 40th-minute foul in the open field by Christian Wörns, helping the German defender earn a red card that slanted the field in the underdogs’ favor.

Once again, creeping age and a collection of narrowly missed chances came back to haunt Germany. Meanwhile, Croatia were utterly ruthless. This was how the curtain dropped on an iconic era in German soccer. Klinsmann retired after the tournament and headed for America. Vogts stepped down after eight years at the helm. The national team program as a whole dipped into a trough for years, going winless and finishing last in their group at Euro 2000.

Even a typically gutsy run to the 2002 World Cup final could not overcome the wider sense of cyclical decline, and another ignominious Euro experience two years later in Portugal proved to be the impetus for a dramatic overhaul. Klinsmann took the reins, instituted a bold, system-wide overhaul and ushered in the modern era. Not only for his country but his own career.