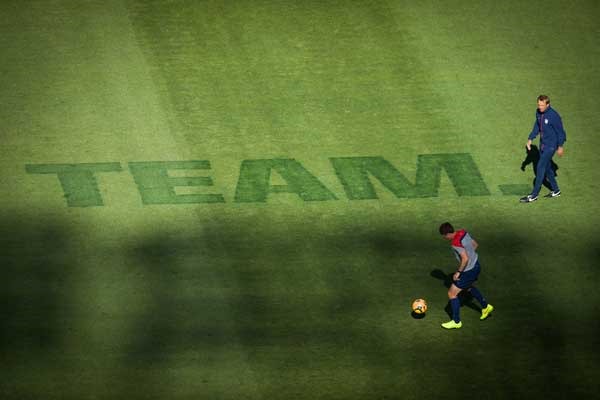 By J Hutcherson - WASHINGTON, DC (May 27, 2014) US Soccer Players – The USMNT hosts Azerbaijan tonight (10pm ET - ESPN2) in the first game of the 2014 World Cup Send-Off Series. After last week's unexpected roster reduction, the USMNT will play with its 23-man World Cup squad for the first time. Even with that, it would be a stretch to assume this game will tell us very much about what will happen next month in Brazil.

No matter how much weight you may or may not give the FIFA World Ranking, it has Azerbaijan as the 40th best team in Europe, 85th overall. If you prefer the Elo ranking, they're 103rd. The USMNT is 14th in both.

Drawn into Group F during UEFA World Cup Qualifying, Azerbaijan finished 4th behind Israel (who plays Mexico in a friendly tomorrow night). The two teams moving on in Group F were Russia and Portugal. There was no famous qualifying victory for Azerbaijan against the USMNT's World Cup group G opponent Portugal. Playing their home game in Braga, Portugal won 3-0. They shutout Azerbaijan 2-0 in Baku. Azerbaijan did draw Russia 1-1 in the final Group F match day in a game that mattered for Russia.

The most meaningful connection for this game is Azerbaijan coach Berti Vogts. With Azerbaijan not involved in the World Cup, USMNT coach Jurgen Klinsmann named Vogts as his 'special advisor' in late March. Vogts specific role with the USMNT isn't exactly clear. When making the announcement, Klinsmann said, "through his time as the head coach of Scotland, Nigeria and Azerbaijan, he is obviously very familiar with our opponents in the group stage of the World Cup, and for us this is a huge bonus."

Unlike other teams playing a pre-World Cup schedule of games in the USA, Azerbaijan is only here to face the USMNT. After Tuesday, their next game is against Uzbekistan on August 20th.

As a run through for Klinsmann's squad, this is a game that makes sense but that's the extent of it. The USMNT won't be playing any team in Group G that will bunker and hope for the odd counterattack to work in their favor. The USMNT also won't be expecting to control the offense against Portugal or Germany.

With that in mind, it will be interesting to see what Klinsmann does with his starting eleven. After Friday's press conference to address the World Cup cuts in general, and dropping Landon Donovan in particular, Klinsmann has to realize all eyes are on him. He needs to show he has the situation under control, and that means attractive soccer against an overmatched opponent.

Klinsmann is under pressure here, whether or not he wants to admit it. He needs to justify his decision-making as well as his training methods through the opening weeks of World Cup camp. That means a team capable of putting his ideas into play almost immediately. It's a tough situation, but one Klinsmann's timing creates. This game is on him. It's his proof of concept to reinvigorate a USMNT fan base largely disappointed in how Klinsmann publicly and privately handled last week’s roster reduction.

Hey, as Klinsmann himself said, this is part of the job. Jurgen Klinsmann is an elite coach by any standard and he knows as well as anyone that he has to shoulder that responsibility. He knew that before the roster reduction announcement on Thursday and he certainly knew it after Friday's press conference.

This isn't a crucial game by any stretch. It's the first of three warm-ups. Most USMNT fans know to take these games as just that. It's live game experience in front of a crowd to make sure the World Cup tactics are working as planned. From what we knew going into the World Cup camp, it was more about figuring out the final 23-man roster than anything else. Now that Klinsmann's early announcement already answered that issue, it's about how the USMNT plays over 90 friendly minutes.

Azerbaijan might not be the best opponent. If Vogts uses the same tactics he showed against the big teams in World Cup qualifying, the USMNT will have to break down an opponent. That might be helpful for Gold Cup prep, but not for the World Cup. If Vogts opts for a more open style of soccer that worked for Azerbaijan against Northern Ireland and Israel, it doesn't exactly flatter the USMNT if they're unable to produce.

Klinsmann's situation here is difficult. He needs a result to shore up his squad and public opinion, but he can also easily downplay the first of three Send-Off Series friendlies. With last week in mind, how Klinsmann handles Azerbaijan is more important than any of us expected.