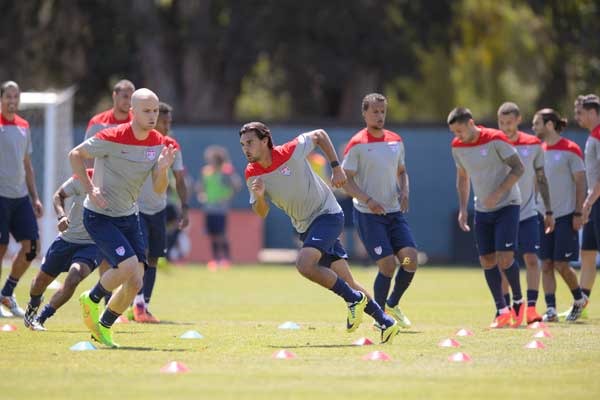 By J Hutcherson - WASHINGTON, DC (May 30, 2014) US Soccer Players – The USMNT returns to action in game two of the 2014 World Cup Send-Off Series, switching coasts for a Sunday friendly against Turkey (2pm ET - ESPN2). This game should pose more problems for USMNT coach Jurgen Klinsmann to solve.

Like Azerbaijan in the opening Send-Off Series game, Turkey isn't going to the World Cup. However, the bulk of its team is coming off a competitive Super Lig season.

Jermaine Jones and Super Lig teams making it out of the Champions League group stage might be the strongest link most USMNT fans have with Turkish soccer. Currently 39th in the FIFA World Rankings and 23rd in UEFA, it's their UEFA co-efficient ranking that's as important. Turkey dropped a slot to 11th in the club coefficient, swapping places with Belgium's Pro League. Spotting them Ukraine's Premier League, most USMNT fans could probably come up with the other eight European leagues ahead of Turkey on the list.

That's important for two reasons. First, there's a good case for Turkey underachieving at national team and club level. Second, this isn't a team for the USMNT to overlook.

Last night at RFK Stadium, Turkey shutout Honduras 2-0. That's not the kind of World Cup warm-up result any of the participating teams expect when facing a squad that didn't qualify. CONCACAF vs UEFA comparisons seldom flatter, and Honduras disappointed. 1 shot on goal from 11 taken to Turkey's 6 from 17 isn't impressing anybody.

The goals came late, with Turkey scoring in the 70th and 83rd minutes. By that point, both teams had made more than three substitutions. If that scenario sounds familiar, it's similar to how the USMNT got a result against Azerbaijan on Tuesday night in San Francisco.

The USMNT needs more against Turkey, in part because the win against Azerbaijan raised multiple questions. With Clint Dempsey a late scratch from the starting lineup, there's a built in excuse for the USMNT on the night.

Dempsey is key to Klinsmann's plans for a diamond midfield. Without him, the shape had trouble. That created issues for the USMNT all over the field. The strike partnership of Jozy Altidore and Chris Wondolowski ended up with Wondolowski in the attacking role and Altidore linking up defensively. The USMNT defensive midfielders ended up closer together. The result was the USMNT having to play around its own strategy.

“It’s obviously the first game and there are still things to work on," USMNT midfielder Michael Bradley said following the Azerbaijan game. "Difficult night to play, no question about it. But it’s good to get 90 minutes against a team other than ourselves. We’re looking to continue our fitness, continue building our relationships on the field and obviously defensively we want to work on how organized we can be and how difficult we can make it on the other team.”

Clint Dempsey is back for Turkey, and that's a major change for the USMNT. It makes the team much tougher to scout based on what happened on the field against Azerbaijan. With Dempsey involved, there's more freedom for the midfield to take Klinsmann's shape and work with the forwards. That's enough to expect a very different USMNT on Sunday afternoon at Red Bull Arena.

With two games left before travelling to Brazil, there's also the real game scenario issue. Friendlies are just that, exhibition games that occasionally rise to the level of games that count. The USMNT needs moments in the next two friendlies that hit that mark. Klinsmann needs to see his squad under pressure.

This is no longer about judging individual players. It's about figuring out if his tactics work on the field, what adjustments he needs, and how to get the squad to a World Cup level. There are only a few teams entering the World Cup without those same concerns.