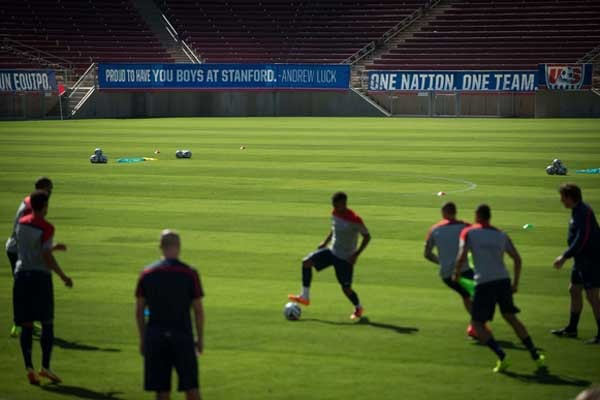 By Charles Boehm – WASHINGTON, DC (May 16, 2014) US Soccer Players – First things first: The 30 men called to join Jurgen Klinsmann and the rest of the USMNT entourage for the World Cup training camp in Palo Alto, California this week all deserve their spots. Every single one of them has worked mind bogglingly hard over many years to reach the upper echelons of their profession. All have useful traits to offer the USA’s impending adventure in Brazil.

However, the process that produces this list is an unavoidably cruel and capricious one. Klinsmann and his staff – and every one of the 32 technical staffs headed to the World Cup, for that matter – must sift through the data (both hard and soft) they’ve accumulated firsthand over the past three years. The up-to-the-minute productivity of the players at club level. Certainly, their own gut feelings about individuals as well as the collective.

Thus a three-year journey ends, jarringly, with a snapshot.

“It’s not that easy, because you have to leave quite a few players out that were part of this important process that took us to Brazil,” said Klinsmann in a media conference call on Monday. “Making those phone calls and telling them that they are not part of the 30-man roster now was unpleasant.

“Every call you make is tough, because it’s a very personal one and it has a big influence on their well-being in that moment, but also career-wise because you are missing out on the biggest tournament that you can play in in your career.”

These realities claim unfortunate victims in every single World Cup cycle, arguably with greater frequency over time. Very, very good players doing great things on major stages miss out, while others slip in via a murky confluence of skill, good timing and good fortune.

As ESPN FC’s Jeff Carlisle noted on Monday, the USMNT’s last three cycles have featured a particularly ghoulish twist. Since 2006, the scorer of the USA’s qualification-clinching goal hasn’t made the final World Cup roster.

That’s not fair. Not in any wider, human sense of the word. In the World Cup translation of Maslow’s hierarchy, coaches are required to take those prior achievements for granted and pick a squad best suited for the task ahead.

This has cut short the dreams of an impressive list of world-class players around the planet both this week and over the years – and will do so again on these shores in less than three weeks, when Klinsmann must trim his roster down to 23 shortly before departure for Sao Paulo.

“It’s something that I don’t think I’ll ever get over,” Brian Ching, a stunning late USMNT casualty four years ago, told Carlisle last month. “It hurts you on a level that it’s something you always remember.”

Managers are required to make these judgments. That responsibility includes an implicit duty to maintain the integrity of “the locker room”. That collective vibe quickly unites that disparate group of professionals when they gather from points far afield to wear their country’s colors.

So plenty of familiar faces will greet the players at Stanford University’ athletic facilities. An extensively planned regimen will connect them in shared work (and suffering) as the looming task ahead forces almost everything that has come before into the margins. If the coaching staff has done its job, there’s little time – or inclination – to ponder who’s not around.

For most players, knowing that makes the pain of missing out even greater. The National Team caravan has moved on without them, for now at least, and it’s not looking back.

Some use this sting as a motivator, while for others it’s a parting shot. Just like the Olympics, the unforgiving World Cup cycle forces all of us to acknowledge how quickly skills can erode and bodies can break down over any four-year period. That’s especially true for soccer players on the north side of 30.

In one month’s time, the USMNT will send 11 of those 23 men out to battle the world’s best. When the whistle blows, those sitting in the bench area will serve as an onsite avatar for the emotions of the fans back home.

While it won’t show up on camera, that team will run deeper still. It traces all the way back to those left at home who helped build the path to the World Cup stage.