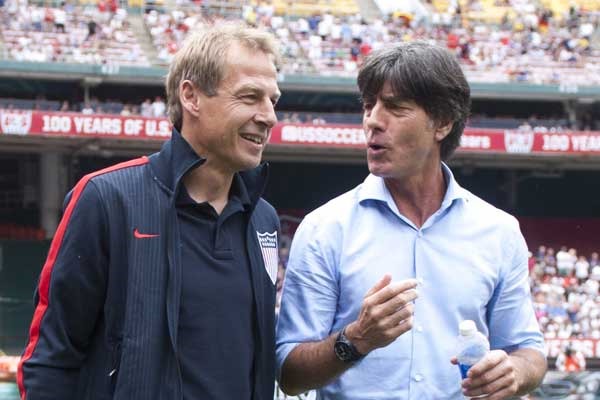 By J Hutcherson – WASHINGTON, DC (May 15, 2014) US Soccer Players – It’s an easy point to make about the provisional World Cup squads. If your country has a few dominant teams, count the number of players from those clubs on the World Cup squad.

Bayern Munich and Borussia Dortmund put double digits between them in Germany’s 30-man provisional roster. It’s the same for the big three clubs in the Netherlands. Barcelona has seven players on Spain’s roster. For all the talk of developmental problems from the international rosters of England’s Premier League, all but one of England’s squad play there. Six Juventus players are in Italy’s 30. Portugal takes a third of the squad from the major Primeira Liga clubs.

After all, if you’ve got a supply chain from elite clubs, why not use that to form the core of an elite National Team? Getting the pieces to fit can certainly be difficult, but it’s not as difficult if the obvious pieces are already there. It’s not just the caliber of player. It’s their experience playing at the highest level of club soccer. There’s no doubt that translates directly to the World Cup.

What we’ve seen with the choices on the 30-man squads from the most likely World Cup contenders is a mix of pragmatism with only the slightest risk. Leaving Ronaldinho out of the Brazilian 30 might be somewhat disrespectful to the player, but it’s not likely to shift Brazil’s fortunes. It’s the same with Ashley Cole and England, Carlos Tevez and Argentina, or Samir Nasri and France.

Instead, the only trend we’re really seeing from the top clubs is a focus on younger players. Again, this is pragmatic considering how advantageous it might be to have World Cup veterans in the confederation tournaments over the next cycle. And, yet again, the risks here aren’t likely to easily explain disappointments in Brazil.

So is there an obvious big club advantage? Spain certainly thought so in 2010 when a dozen of their World Cup winners played for either Barcelona or Real Madrid. Not only did those players know their club teammates, they knew each other competitively. All but three players on that squad were from La Liga clubs. Germany went three better with an all-Bundesliga World Cup squad.

West Germany did the same thing when they won in 1974. That squad that had seven Bayern Munich players and five from the other great Bundesliga team of the era Borussia Moenchengladbach. The Netherlands team West Germany beat for the trophy had seven players from Feyenoord and six from Ajax. Feyenoord, Ajax, and Bayern won the previous five European Cups with Bayern on the first of a three-peat. Who wouldn’t pick those players?

Last time around, Barcelona put 13 players into the World Cup. Chelsea and Liverpool had 12 each. Bayern Munich had 11. Real Madrid, Inter Milan, Spurs, and Arsenal were in with 10. If you want to describe a super club, it’s one that puts most of its starting eleven on competitive World Cup teams.

For all the talk of fit over pedigree, no World Cup coach is really surprising anybody. Sure, Spain brought in uncapped players as part of their provisional roster, but that highlights the word ‘provisional.’ Spain’s first choice is as close to obvious as we’re ever likely to see at World Cup level, and they’re not the only team in that category. It’s not so much a question of the coach making the clear choices and letting the players get to work as it is working with the best pieces.

If you have them, use them. That’s perhaps the biggest distinguisher between the would-be elite and the truly elite.

The criticisms directed at the elite national team coaches are almost trivial compared to the coaches trying to find reliable fits for starting jobs. Look at the teams that didn’t even bother to name 30 players for examples of where the degree of difficulty is much higher. That’s not the same thing as pressure. Coaches capable of doing the job at big clubs and national teams are their own sub-category and for good reason. It’s a different job with a shift in expectation that some very good coaches cannot handle.

None of the 2014 World Cup contenders took a risk with their coaches. In return, none of their coaches will take a risk when their final 23-man World Cup rosters come due.