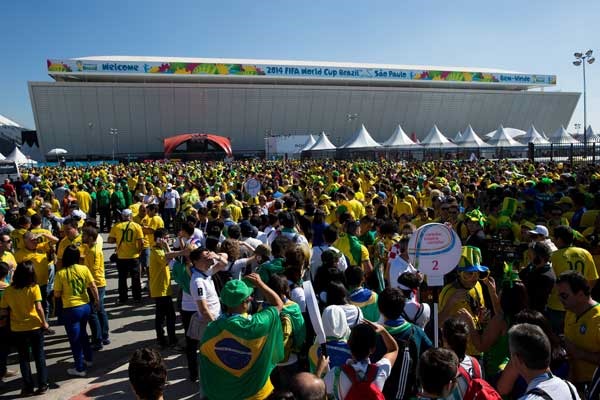 By Jason Davis – WASHINGTON, DC (June 13, 2014) US Soccer Players – With so much time to kill during the build-up to the 2014 World Cup, the world was always going to focus on the negatives. Protests, stadium construction delays, the death of workers rushing to build those stadiums, the government’s aggressive response to discord.

So much of what we talked about leading into this World Cup was depressing. Brazil’s World Cup experience highlighted the problems that come with hosting the world’s biggest sporting event, rather than uplifting and celebratory of the game itself.

There was tragedy inherent in the discussion. In Brazil, synonymous with soccer, the 2014 World Cup became controversial. In the months ahead of the World Cup, a soccer event, soccer was the subplot.

On Thursday, the games themselves arrived. Across the nation of Brazil, fans turned their eyes to the opener featuring their beloved Selecao going up against Croatia in Group A. There’s heavy pressure on Brazil to win their sixth World Cup title on home soil, and even more pressure on young star Neymar to carry them to it. In their first opportunity to prove themselves worthy of the expectations, they won 3-1.

There was nothing easy about the victory, despite the final score. Brazil looked uneasy and unsure for much of the match. They started slowly, their energy not matching that of the capacity crowd. The host nation fell behind in early when Marcelo erroneously turned a Croatian cross into his own net. For a brief spell, there was a question about Brazil’s ability to handle the weight of nation resting on their shoulders.

Of course, Neymar scored. His goal didn’t seem to fit the moment, but was nonetheless the ice-breaker Brazil so desperately needed. Broadcasters and journalists reported an explosion of fireworks around the city amidst their descriptions of the action. The fireworks were a joyful display that covered up the anxious feeling coursing through the country, both on the field and off. Anywhere else, it might have seemed sardonic, out of place, disingenuous.

A penalty call, perhaps influenced by the crowd, led to a Neymar goal that doubled the lead. Croatia pushed for an equalizer, but the Brazilians closed out the game through Oscar’s toe-poke past the Croatian goalkeeper in added time. A nation exhaled, three points secured, the first step on a month-long road to the Maracana and a chance to fulfill national destiny. How Brazil won didn’t matter.

For a long time, despite the lingering nature of stereotypes, Brazil has been a pragmatic soccer nation. Winning is what matters. If winning comes with the flair the rest of the world associates with the men in yellow, so be it.

At the same time the world’s most famous soccer team fought to reign in their nerves, people around Brazil continued to express their frustration with the people in charge of the country. Police clashed with protesters in Sao Paulo and elsewhere, and while the numbers were not large, the violence stood in contrast to the cheerful scene in the stadium. Twitter was abuzz with observations on the game occasionally interrupted by the troubling scenes unfolding in the streets.

Brazil loves soccer, but Brazil is not simple. If there’s a worthwhile lesson to take from all of this, good and bad included, it’s that Brazil defies easy explanation. It’s not all samba and costumes, no matter what the opening ceremonies looked like. Brazil is both happy to welcome the world to the spiritual home of soccer and bounce and dance and cheer in the stands while simultaneously raging against the circumstances that brought everyone there. Only Brazil can live that contradiction so fully and somehow still pull it off.

It’s a contradiction their team tends to live on the field as well. The expressive skill the players still possess exists alongside the matter-of-fact nature they go about winning games.

Whether or not the pressure of winning it all on home soil got to Brazil, their performance seemed to embody much of the unsettled feelings swirling around the tournament. This is a schizophrenic World Cup, as it always promised to be. It will be down to the type of tournament we get, and the payoff it provides, as to whether it will all have been worth it in the end. For Brazil, only another world championship can possibly make it so.

All of this was clear on the very first day of competition. There are still 30 days to go. Brazil as a nation will not turn on games that don’t involve its team, but with so many cities hosting so many matches, the chances more trouble is on the horizon are high.

That trouble is unlikely to overwhelm the tournament, or even spoil the fun Brazilians will have while supporting their team. It certainly won’t affect those of us sitting comfortably at home, hardly bothering to reconcile the societal strife with our love of soccer because the strife is so removed and the soccer will always win out.

For better or worse, soccer is winning out in Brazil too… if just barely.