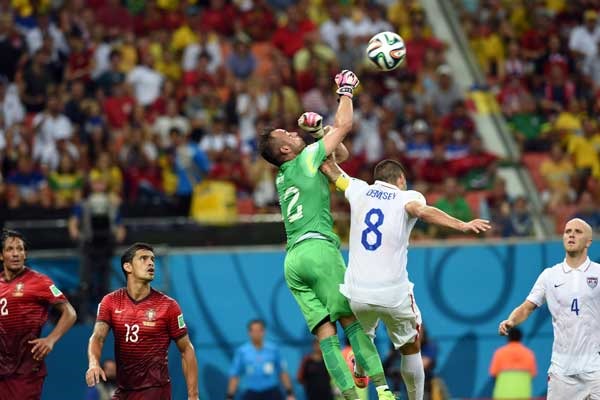 By J Hutcherson – WASHINGTON, DC (June 23, 2014) US Soccer Players – It might surprise newer soccer fans to learn that the World Cup doesn’t necessarily stay the same every four years. Though the current version of the World Cup has been relatively stable, FIFA does change the competition. Some of those changes are quite drastic. For instance, in the 1994 World Cup the USMNT qualified for the knockout round after finishing 3rd in the group. That’s not possible in 2014.

FIFA always shows a willingness to make changes, primarily because the World Cup group stage is a problem. FIFA recognized this early on the history of the World Cup. Whether it was double group stages, 3rd-place wildcards, and other tweaks to try to find a better way, the groups of four with the top two teams advancing creates an obvious issue. It’s possible that the third game in a group won’t matter.

To lean on an old sporting cliché Australia and Spain played each other for pride in the final game of Group B. Both teams couldn’t advance out of the group regardless of what happened in their final game, and unfortunately they played each other. This is the problematic scenario for the group stage. Fortunately in 2014, it’s also the only example.

When the World Cup returned in 1950, knockout rounds were knocked out entirely. The group stage put teams into a final group of four. More games means more tickets to sell, something FIFA figured out relatively early on.

For the 1954 World Cup, FIFA dropped the round robin approach to the group and seeded the group stage. That ham-fisted idea ended with complications. They needed an extra playoff game to figure out who advanced in two of the groups. The round robin groups returned for 1958.

In 1974, FIFA introduced the double group stage. That meant the initial group stage qualified 8 teams for a second group stage. Those teams played in two groups to determine the finalists. The runners-up in each group played for 3rd-place. The only change for the 1978 World Cup was to use the shootout for breaking ties in the knockout stage. In the double group format, there were only two knockout games (the final and the 3rd-place games).

Not satisfied with the double group as it stood in the 70s, FIFA once again tweaked the format. Part of this was the addition of 8 teams to bring the total to 24. For the 1982 World Cup, the group stage was the same, adding two more groups. That stage cut the number of teams in half, with the remaining 12 advancing to 4 groups of 3 teams. One team advanced from each group to the semifinals. 1982 was also the last World Cup where teams played their third games of the group at different times. West Germany and Austria made sure each other advanced. From then on, the final group stage games started simultaneously.

FIFA expanded the field to 32 teams in 1998, bringing an end to the 3rd-place wildcard era. Other than the decision to drop the Golden Goal rule for the 2006 World Cup, the competition has looked the same since France 98. That’s a long time for FIFA to resist the urge to change things. There’s no reason to expect three more World Cup cycles with the same structure in place.

So what might happen to the World Cup? Well, for one thing, expansion isn’t off of the table. Adding more teams likely means a return to the wildcard format from the group stage. It also adds to the total number of games, something that’s good for the host country and for FIFA. In the modern era, it’s more than just tickets available to sell. It’s offering more games for rights holders, leading to more inventory and more money.

Money as the primary driver for changing the World Cup is nothing new, and it as much as sporting reasons will be responsible for the next round of changes to the World Cup.