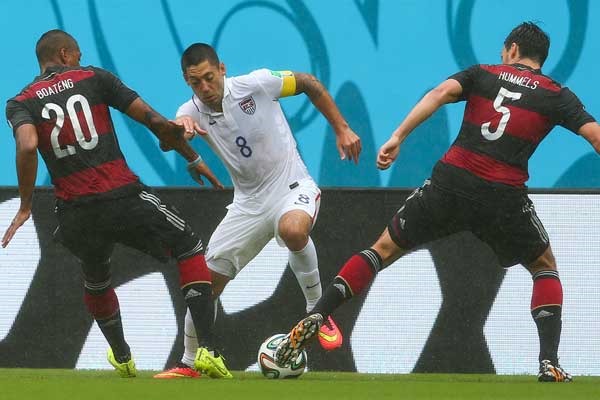 By Jason Davis – WASHINGTON, DC (June 27, 2014) US Soccer Players – By virtue of the USMNT advancing to the Round of 16 on Thursday, CONCACAF – perhaps the world’s most lightly regarded confederation not named Oceania – will have three representatives in the knockout rounds of the 2014 World Cup in Brazil. Only Honduras failed to escape their group. Though the Catrachos sullied the region’s showing with some of the ugliest soccer in the tournament, CONCACAF is still sitting pretty.

Once thought dead in the water thanks to a terrible qualifying campaign that required an American assist, Mexico turned it on at just the right time. El Tri’s strong showing as the second place team in Group A is nothing less than what fans would expect in any other World Cup. In this World Cup, meeting that basic level is reason to be thrilled. Mexico is fun and is having fun. Much of the credit for that goes to head coach Miguel Herrera.

Costa Rica is the surprise of the tournament. Anyone familiar with the Ticos within the CONCACAF bubble will tell you they always possessed the talent and team mentality necessary to make some noise at a World Cup. It was simply a matter of getting the best out of that talent, beyond the obvious attacking prowess of Joel Campbell and Bryan Ruiz. Like with Mexico, much of the credit for Costa Rica’s success goes to their coach, Jose Luis Pinto.

Next on the docket for the three CONCACAF qualifiers is winning an elimination game. Thanks to the luck of the draw and the surprises thrown into the mix by one of the more open, interesting World Cup tournaments in memory, the three teams face varying challenges to get into the quarterfinals.

For reference, the last CONCACAF team to reach the round of eight was the United States in 2002. The USMNT defeated regional rival Mexico in the first knockout round of that tournament before losing to Germany.

Mexico’s challenge is without question the fiercest of the three. Herrera’s team didn’t lose a group game and finished with the same number of points as Brazil, but missed out on the top spot due to goal differential. That means Mexico must square off against the Netherlands, winner of Group B, and one of the few European powers to impress through their first three games.

The Dutch not only won each time out, they did it in style and scored ten goals in the process. The stars available to head coach Louis Van Gaal stand out – Robin Van Persie, Arjen Robben, Wesley Sneijder. There are other up-and-coming players in the team that can be just as dangerous to Mexico.

No team in the tournament is playing like they have less to lose than Costa Rica. The tiny country is already punching above their weight in the number of players they send to European league. There’s no reason to think the 2014 World Cup won’t serve to increase that representation.

Next up for the Ticos is Greece in Round of 16, the most favorable matchup – on paper at least – of any of the CONCACAF teams. Greece is notorious for their bunkering mentality and set piece reliance. In that regard, they might present Costa Rica with a challenge the Central American team has yet to face in Brazil.

Costa Rica’s success so far came in large part from counterattacking soccer, a hallmark of the tournament across the group stages. If Greece allows Costa Rica to possess the ball and defends in tight areas, Pinto’s team will need to find another way to get a goal. Can Costa Rica continue their amazing World Cup against what many would consider the weakest team left in the tournament?

That brings us to the USMNT. The American path to the knockout round was extremely difficult. Group G was tough not only due to the level of competition. The intense travel and weather demands of their schedule only added to the problems. Getting this far is a victory, but Jurgen Klinsmann should have no reason to think his team isn’t capable of knocking off Belgium in the Round of 16.

A team talked about as a potential surprise before the World Cup, the talented Belgians have underwhelmed. Belgium needed late goals in all three of their group games to win, playing a style that is more grind than glitz.

The dynamic changes when only a victory matters. Any attempt to divine head coach Marc Wilmots’s approach on Tuesday when the teams meet in Salvador is questionable. Meanwhile, no one can quite be sure what the USMNT’s full capabilities might be, with only a brief period against Portugal showing them playing anything other than gritty, defensive soccer for any length of time.

Prior to the start of the tournament, the USMNT was far from a favorite to advance out of Group G. Now that they have, what’s the ceiling?

No matter the next round brings, this is CONCACAF’s most impressive showing at a World Cup. That comes down mostly to the number of teams the confederation put through to the second round. It’s also due to the quality of soccer played by all three nations who progressed from their groups. Mexico, Costa Rica, and the USMNT show CONCACAF for what it might become.

Ultimately, however, knockout round games, and deeper runs into the top eight or four teams in the tournament will be what brings CONCACAF the real plaudits. Can CONCACAF continue to impress? There’s more riding on the 2014 World Cup for CONCACAF than anybody thought a couple of weeks ago.