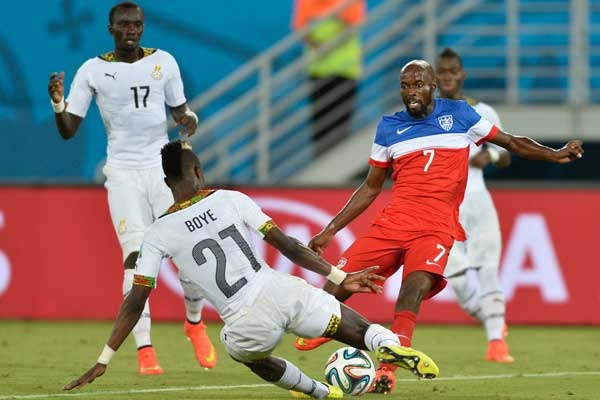 By Jason Davis – WASHINGTON, DC (June 18, 2014) US Soccer Players – Among the players most credited for dragging the United States through to a 2-1 win over Ghana in their 2014 World Cup group stage opener, names like Jones, Beckerman, and Cameron stand out.

Each of those three players, contributing mostly to the draining defensive effort it took to even give the Americans a chance to win the game through John Brooks’s 86th minute header, were stars. However, there’s one player receiving much less credit than he should. He happens to be the team’s most experience World Cup veteran.

We’re talking, of course, about DaMarcus Beasley. Beasley started at left back on Monday for the USMNT, an unsurprising turn of events after head coach Jurgen Klinsmann spent much of the buildup to the tournament relying on the Puebla winger to fill a hole in his lineup. America’s longstanding problem with the fullback positions, more often on the left than the right, forced Klinsmann to find an alternative to the limited options available.

Beasley fit the bill for a number of reasons, most notably due to his left foot and his still-impressive speed. Even at 32, Beasley provides the type of up-and-down ability Klinsmann values at the fullback positions.

Klinsmann wants his fullbacks pushing high up the field to participate in the attack and create odd-man situation against opposing defenders. A natural midfielder who knows how to combine and can threaten with that speed is a good fit for the role when the USMNT has the ball. He’s less suited to play the defensive part of the game, a trade-off which Klinsmann seems comfortable making but which puts each of Beasley’s performances under a harsh light.

Which is why the fact that Beasley was not a defensive liability Monday is striking. Beasley is clearly uncomfortable in one-on-one defensive situations without the safety net of teammates behind him (which he has when playing in midfield). Working in the formation and being careful not to expose his center backs to rampaging Ghanaian attackers, he was more than competent in the Americans’ 2-1 win.

It’s an odd place for Beasley to be at this point in his career.

This is Beasley’s fourth World Cup, his debut in the tournament coming way back in 2002 as a 20-year old prodigy. For the 2002 World Cup, Beasley was part of the new wave of American talent coming out of recently created Bradenton academy.

Bradenton’s purpose was to transition players from local youth stars to high-level professionals by filling a gap not yet accounted for by Major League Soccer. The first class included Beasley, Landon Donovan, Kyle Beckerman, and Oguchi Onyewu. The first true fruits of the endeavor came in the form of Beasley and Donovan making Bruce Arena’s team in 2002 and then playing important roles in a quarterfinal campaign. The importance of Bradenton for the USMNT has since diminished, with MLS clubs stepping up to take over much of the heavy lifting themselves.

Beasley himself soon moved on to PSV Eindhoven in the Netherlands. There, he played a key role in both a league championship and a semifinal run in the UEFA Champions League. During his Dutch period, he appeared in the 2006 World Cup in Germany, starting all three of the USMNT matches on the left side of midfield. He spent 2006-07 in the Premier League with Manchester City on loan from PSV, before eventually joining Rangers in Scotland.

Struggling for playing time with Rangers, Beasley nevertheless remained in the USMNT picture with Bob Bradley in charge of the team. Although Beasley’s move to left back became permanent under Klinsmann, it was actually Bradley who first shifted Beasley into the position in 2009. Bradley knew full well that Beasley could play left back. When Bradley coached the Chicago Fire, he occasionally used Beasley as a left back in the early 2000s. Back then, it was the same situation. A pressing need and a left-footed player with speed and poise on the ball.

Beasley made his third World Cup team in 2010. Unlike his previous two tournaments, however, Beasley saw little of the field in South Africa, making just one substitute appearance against Algeria.

Immediately after the World Cup, Beasley moved on to Hannover 96, the club of American defender Steve Cherundolo. He played just four matches over a full season. At that point in Beasley’s career, approaching 30 and without a settled club situation, the possibility he would make a fourth World Cup team, much less establish himself as a starter for it, was hardly a thought. There was a graduate of Bradenton’s Class of ‘99 that everyone assumed would play in his fourth World Cup, but it wasn’t Beasley. It was Landon Donovan.

Then Beasley did something unconventional. He took his career to Mexico, a place American players without Mexican heritage rarely consider. It immediately paid dividends, with his speed and technical ability allowing him to thrive in a league known for its quick, technical players and less physical style.

In a perfect world, Beasley is not starting at left back for the United States in the World Cup. Beasley himself would probably admit as much. Beasley’s Mexican career revival, his dedication to learning a position he was never meant to play, and a system that allows him to do the job needed without needing to be spectacular took him to his fourth World Cup.

Just making it to Brazil is a reason to celebrate Beasley. That he’s there as a defender, and a starting defender at that, is a reason to marvel at him.