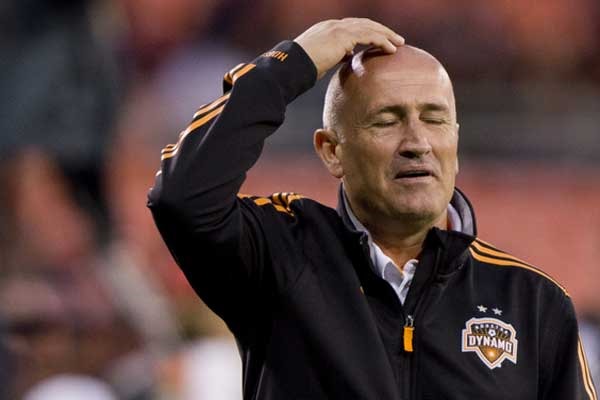 Year-to-year, regardless of shifting trends in MLS player acquisition or the ever-morphing ways to interpret the salary cap and related rules, Kinnear always manages to keep his Houston Dynamo team competitive. Often, Kinnear plays magician with his squads. He lifts them from skin-of-their-teeth playoff entrants to MLS Cup contenders.

Kinnear’s Houston Dynamo have the two MLS Cup triumphs from 2006 and 2007. However, it’s the more recent Eastern Conference titles in 2011 and 2012 that are more impressive. In neither of those years did Houston have the best team in the conference. In both of those years, the Dynamo rolled into the final game of the season only to run up against the buzz saw that was the LA Galaxy.

Falling short in the MLS Cup doesn’t take away from magic of the achievement. Kinnear’s reputation as a master of the balance between the MLS regular season and the playoffs is well earned. Never doubt Dominic Kinnear, because Dominic Kinnear has rarely given reason to doubt.

At some point, however, the magic will wear out. Whatever deft touch Kinnear uses to navigate a grueling regular season, squeak into the postseason, and then surprise higher seeded clubs in the playoffs, will fade. Considering his record, it might be better to wait until the Dynamo miss the playoffs before declaring Kinnear’s run over. Still, there’s a chance it’s already happening.

Ignore the MLS standings. The Dynamo in fourth place in the Eastern Conference doesn’t mean as much as you might think. MLS likes to make sure we can’t easily compare teams since Houston has already played 15 games. More important is the Dynamo already have eight losses and possess the joint-worst goal differential in the Eastern Conference. Houston shares that humbling distinction with the last place Impact.

Other Houston Dynamo teams have struggled. Then we get a bit of that Kinnear magic and the squad makes a drive for a title. But this Dynamo team? It’s that this Dynamo team seems to lack the mental edge, consistency, and depth that are Kinnear hallmarks.

It might be unfair to judge Houston in this particular moment. They’re fresh off a 3-0 loss in Colorado that stretches a losing and scoreless streak to three games. Both Brad Davis and Oscar Boniek Garcia are away with their respective national teams. Ricardo Clark is out recovering from a concussion. The lack of depth is obvious.

MLS fans remember the failures that were Luis Angel Landin, Koke, Ade Akinbiyi, and Carlo Costly. Yet, the Dynamo always managed to appear in the postseason. Mistakes are easier to forgive with regular playoff appearances.

For any other team, striking out on so many highly paid players would be disastrous. Houston doing so and still succeeding is the essence of what we can fairly call “Dynamo Exceptionalism.” From the outside, that exceptionalism always appeared to flow from Kinnear. As long as he’s in charge, it’s difficult to imagine the Dynamo won’t be playing for a trophy come the Fall. Kinnear is a master at squeezing out an effective, if unspectacular, side out of whatever pieces are available. In the grand tradition of American soccer and Kinnear’s native Scotland, it doesn’t have to be pretty.

Unfortunately, nothing lasts forever. The innate sense that they’ll always get by can also create a complacency within the organization. Consider that heading into the 2014 season, Houston failed to sign a single player from outside of MLS. The sum total of their activity was three SuperDraft picks, a trade for Portland’s David Horst, and bringing in midfield Tony Cascio on loan from Colorado. The expectation for Horst was immediately stepping into the back line after the club parted ways with Bobby Boswell. Cascio, the creative spark in midfield, either via spot start or off the bench. Rookies are rookies. There was never any guarantee any of the draft picks would contribute in their first pro season.

A scan of the 2013 transactions shows that Houston made a lot of moves, but none of them are notable a year later. The list is comprised of reclamations projects, journeymen, and unproven squad players. That would be fine for a team with top MLS talent already in place. That wasn’t Houston, clearly lacking in several areas and hardly addressed them. That’s the same Houston Dynamo coming off an MLS Cup Final loss the prior season.

The 2014 reinforcements haven’t made much of an impact, either. Horst has been mostly solid in fourteen games, with occasional moments of poor play mixed in. Cascio suffered a knee injury and is out for the season. The same is true for one of the rookies, forward Mark Sherrod, who was just beginning to contribute when misfortune struck. Bad luck doesn’t land squarely on Kinnear’s shoulders, but the inability of the squad to overcome it is at least somewhat on his ledger. Houston looks like a team ill prepared for the usual attrition that comes with a grueling MLS season, not to mention the temporary absences of a pair of important players.

Houston hasn’t missed out on the postseason since 2010, the only time they’ve failed to qualify since the move to the city. That season turned to be a bump in the road rather than a harbinger of the club drifting into mediocrity. Kinnear hadn’t yet lost his touch.

Is this season different than that one? First, will Houston miss the playoffs, and second, would that mean anything about Kinnear’s ability to lead a winner? Looking back up to the rule outlined at the top, hesitation abounds. It is only June, there’s a World Cup break coming, the team could add help in the summer, and it is still Dominic Kinnear roaming the sideline.

For reasons that are hard to define, 2014 for Houston certainly feels different. Perhaps, the best way to express it is “because MLS is changing, and because it has to end sometime.”

This was a column outlining reasons to doubt Dominic Kinnear. It was written with full knowledge how ridiculous it may look when the Dynamo slip into the playoffs, make a deep run, and prove me wrong.