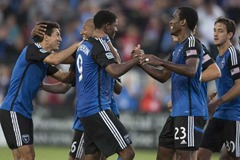 The San Jose Earthquakes will play the first game at the San Francisco 49ers new Levi’s Stadium on August 2nd, but there’s a deeper connection between the MLS and NFL teams. On Monday, the Earthquakes and 49ers issued a press statement announcing a 5-year partnership to promote soccer games at the 68,500-seat Levi’s Stadium in Santa Clara and the Earthquakes’ 18,000-capacity stadium scheduled to open next season. The two stadiums are roughly six miles apart.

“This partnership is an exciting opportunity to work alongside the Earthquakes to bring premier soccer events to the Bay Area,” San Francisco 49ers president Paraag Marathe said. “The region has a great deal to offer the international soccer community, most notably two beautiful, new facilities that will showcase the sport brilliantly. We look forward to offering sports fans a diverse collection of high caliber events at Levi’s Stadium.”

San Jose Earthquakes president Dave Kaval pointed to the closeness of the two stadiums as a benefit, offering different sizes depending on the drawing power of soccer games.

“We are thrilled to partner with the 49ers,” Kaval said. “The 49ers share our vision and commitment to bringing the best possible teams from around the world to the South Bay. With two first-class stadiums just miles apart, this is the perfect spot to host international soccer games.”

The Earthquakes currently use the 11,500-capacity Buck Shaw Stadium in Santa Clara, moving their bigger games to Stanford’s football stadium. They open the 49er’s new Levi’s Stadium on August 2nd against the Seattle Sounders in a regular season MLS game.